The first day of summer in Paris changed in 1982. The Fête de la Musique was born. After 29 years, the event does not show a wrinkle; it gets better with time.

June 21 is a Monday in 2010. The streets are not as packed as when the date falls on a weekend. Rue Saint-Sabin, however, is jamming with a DJ and we are forced to reach Boulevard Richard-Lenoir via rue Sedaine. Any of our detours are not a problem because music is on practically every street in the neighborhood.

When you visit Paris on June 21, you can try to get into the events at Palais-Royal, Musée d’Orsay or le Louvre. But sometimes, the fun is in your own backyard. 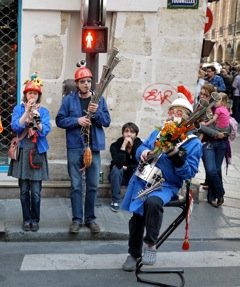 We started out at le Coyotte bar and wound our way through our little streets in the eleventh arrondissement to the Bastille.

As we made our way into the Marais, Ze Klaxon Kompany, a horn band (klaxon), played on rue des Tournelles where Catherine de Medici and Henri II hung their hats  in the 1550s (Use Google Translate). The horns had to compete with the brass band around the corner on rue du Pas de la Mule (named after the step necessary to mount a carriage).

It is remarkable in Paris how quiet it can be when just a stone’s throw away, you hear two bands! This is lucky for some small streets such as rue du Foin Verlomme. Only the voices on the terrace of the restaurant are heard.

The Italian choral group is not as fortunate on rue de Béarn that passes under the Pavillon de la Reine (Queen’s residence). Around the corner a band nearly drowns out the choir, but they persevere with their male and female angelic voices.

The guardian in the Place des Vosges is blowing his whistle — it is sundown and everyone must leave. A large group is on the grass enjoying their picnic; the weather is beautiful, they do not want to leave. Others decide to picnic outside the park on the street.

Music is coming out of the arches on all four sides, but you only hear whomever is playing where you stand. The acoustics are perfect under the arches for listening to the chamber orchestra playing Mozart, the soloist under the King’s Pavilion on rue de Birague or the jazz band twenty steps away.

(Note: Did you know that in 1970 Place des Vosges was going to become a parking lot? The project was abandoned and the trees were replanted. The fountains were put back into service in 1988.)

Originally planned for street musicians to connect their instruments into someone’s apartment outlet and play between 8 p.m. and 9 p.m., the festival lasts hours longer; I close the event after 10:30 p.m.

© 2010 Colleensparis.com
Your HOTEL and APARTMENT RESERVATION is a contribution to maintenance costs of my Web site. Using GOOGLE helps, too. THANKS!