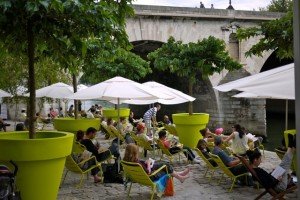 Two items are always big in the French news: Weather and vacation traffic. It seems that many conversations either begin with or eventually touch on the weather. Every one tunes in for the weather report at the end of the news.

Vacation traffic is rarely brought up in my conversations with Parisians. But when it is time to talk about the traffic on the news, the maps take up the entire television screen. All eyes and ears look for the color coordinates. The travelers make plans for a 3 a.m. departure. Routes are shown. The red-outline triangle signs with the exclamation mark are dotted around crucial arteries. The newspaper offers alternate highway routes.

Before the divided highways, families drove on the narrow National 7 through small towns, eating and sleeping along the way. The Route Bleu meandered between Paris and the Côte d’Azur. This route was so well known and created so many souvenirs, that le Musée Nationale 7 opened in 2009. Their Web site is available in English.

I begin to wonder if the authorities are crying “Wolf!” Every school holiday is a vacation break with Parisians heading to the roads, airports and train stations. It seems every break is major. My coiffeuse, Anita, assured me that indeed, crossing over from July to August is the BIG one!

The color code resembles a small crayon box.  The official Web site for the Ministry of Ecology, Energy and Sustainable Development (Bison Futé), speaks of the traffic in colors: Friday and Saturday, the colors are between red and black; classifies Sunday, the end of the weekend as orange. The newspaper headlines  cry out “Samedi noir”. By the third or fourth day, the color is more ecological, it goes green.

One of the reasons for this phenomenon is split vacations. Those who take July vacations are the “juilletittstes” and those who leave in August are the “aoûtiens“. This means that the traffic is headed in both directions from anywhere to somewhere else. The paths criss-cross.

In 2010 on Saturday alone, the cumulative traffic jam is already measured at  660 kilometers long. The record setting length in 2009 was 866 kilometers. Aside from car traffic, the railway system, SNCF, expects 1.6 million travelers, and the airports expect 900,000 passengers to pass through Charles de Gaulle/Roissy and Orly airports.

Helpful hints for future travel in France
If you are traveling by car in France in the future, visit the Bison Futé Web page and click on the British flag for some information in English.

For planning keep in mind national and school holidays.

If you plan to stay in Paris and be a juillettiste or an aoûtien or aoûtienne, you always have concerts, movies, Paris-Plages 2010 and no traffic!