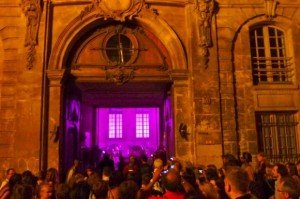 Hard to believe, but it is time for the ninth edition of Nuit Blanche (2010). The dates are the evening of October 2 into the dawn hours of October 3. In the past this event was spread out all over the city.

The mayor’s office has decided to concentrate the event in three Parisian areas: East, West and Center. All of the events will be accessible using the metro. The East segments are around Belleville, the Center around the city’s two islands (Saint-Louis and Cité), and in the West between Alma and Trocadéro.

Connections with the metro is good news if you have ever participated in past Nuit Blanches, which took forever! just to find the places and figure out how to get to them. I remember one year, particpants were standing under street lights in the 11th arrondissement near Bataclan looking at photocopies of maps – oh those quaint pre-app times!

The best way to find out information is on the websites:

Nuit Blanche steeped in intimacy – Paris mayor’s office (their website will offer suggestions as to transportation that night (lines 9 and 14) and the program. Keep reading below and use the Google Translate link to understand the French website.

Nuit Blanche Paris 2 October 2010 – also from the Mairie de Paris but with details (use Google Translate).

On this site using the translation tool, you will find the program, whether the event is accessible to wheelchairs, practical information, the background, events around Paris outside the three main venues, and events outside Paris.

The director of this year’s Nuit Blanche is Martin Bethenod who was appointed director of the Palazzo Grassi and the Punta della Dogana in Venice in June 2010. For five years was the General Curator of the FIAC (Paris International contemporary Art Fair).

© 2010 Colleensparis.com
Your HOTEL and APARTMENT RESERVATION is a contribution to maintenance costs of my BLOG, WEBSITE and NEWSLETTER. Using GOOGLE helps, too. THANKS!

A February Saturday in Paris