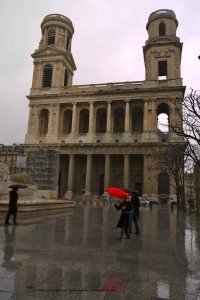 For DaVinci Code trackers, your souvenir photo showing the church Saint-Sulpice has a major distraction.  If you visited the church after the the book’s publication in 2003, the north tower is shrouded in scaffolding and hidden from view. It is time to return to Paris for a new Kodak moment photo shoot.

Completely dismantled stone by stone and put back together again between February 2006 and January 2011, the north tower is completely restored and stable.

The tower, which rises 233 feet above the ground, carries the weight of 22 tons for the Evangelist statues, 41 tons for the belfry frame and 17 tons for the five bells. A protective covering was placed around the north tower in 1999 as the tremendous weight was causing cracks and hazards for pedestrians.

Before this major renovation could take place, Hervé Baptiste the architect in charge of historical monuments attempted to obtain a generally stable analysis of the work ahead. The historical documentation included using laser to map out the metal framing of the tower, identifying the origin of the stones used for construction and discovering the composition of the mortar.

The church has a lively construction history of various architects, initial construction errors, numerous renovations, change in facade design from Baroque to Classical, funding problems, lightening strikes, a revolution, shell fire during the Prussian invasion, pollution effects on the stone, rust, oxidation of the tower’s frame, etc. These numerous factors contributed to the final decree of a complete restoration of the north tower at a cost of 28 millions euros in 2006 money. The city of Paris and the Ministry of Culture shared in the 50-50 bill.

Saint-Sulpice façade project by the French-Italian architect, Giovanni Niccolo Servandoni around 1732History
Anne of Austria (wife of Louis XIII, mother of Louis XIV and ruler of France until her son came of age)  laid the first stone in 1646 to replace the older, decrepit church. Due to funding problems it would be 100 years before the church is finally consecrated in 1745.

The church, finally finished in 1870, then comes under attack in 1871 during Prussian attack and their firing of artillery shells at the towers.

Chalgrin builds the fronton, which is hit by lightening in 1770 so he changes its design to Classical in keeping with the fashion of the day. He constructs the north tower on two levels decorating the upper level with the Evangelists. The Revolution impedes his completion of the south tower and which remains to this day a partial testimony to the original Servandoni design.

Better than before
The Evangelists are visible to all now and completely redone. The originals lie in state in the church crypt. The bells, known intimately as Thèrèse, Caroline, Louise, Marie and Henriette are back in place entirely restored, cleaned and shined. Thèrèse is the largest of the group and third largest among other Paris bells, the Savoyarde or “Françoise Marguerite” of Sacré Coeur Montremartre Basilica and the bourdon of Notre-Dame de Paris.

Guided visits of Saint-Sulpice
Sunday between 3 and 4 p.m. (double check with the church in case they sometimes begin at 2:30 p.m.)
in French with text of the visit available in English, Spanish, German, Italian and French. For questions, contact Mr. Rougé (01 42 22 99 84) or write to: visites@pssparis.net

The Organ Recital (Audition) begins at approximately 11:30 AM and lasts 30 minutes (followed by the 12:05 Mass, including the Offertory, Communion, and a Postlude)