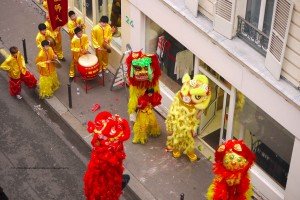 ese New Year is more than a one day affair

Since February 3, Paris is celebrating the Chinese New Year or “Spring Festival” and the year of the Rabbit. The festival lasts for 15 days with surprises every day depending on your neighborhood’s ethnicity. Celebrations have expanded to other arrondissements from the 13th arrondissement as the Chinese population has grown.

Traditional parades held February 6 are available for viewing in photos and videos on the Web site for the Mairie de Paris (Paris Mayor’s Office). Plan for the big parade and events at the Hôtel de Ville plaza on February 13, 2011 at 2:30 p.m.

A parade of noise took place already on Friday, February 4, on certain streets in Paris. If you live on one of the streets where the Chinese have opened wholesale clothing shops in the 11th arrondissement such as the streets Chemin Vert, Popincourt or Sedaine, firecrackers, lions and an orchestra of cymbals, gongs and drums were shaking the windows.

The celebration made its way to rue Sedaine toward Boulevard Richard Lenoir and reached my block eventually. If the shopkeeper wanted the lions and band to stop, they opened a ladder outside the door and attached a strand of fireworks. A head of lettuce (with probably a wrapped pouch of money inside) was hung in the doorway.

When the group approached, the lions danced outside, sauntered inside and back out. They reared on their hind legs, shaking their bodies. One of the lions munched on the lettuce and tore it down, scattering the leaves for good luck on the sidewalk so the other lions could eat the leaves as well. All the while, the mauve banner fluttered as the deafening noise accompanyed the dancing.

Every year the parades pass through the streets in the 13th arrondissement, the 3rd and in the Belleville neighborhood.

Shopping for the new year
If you want to go shopping for Chinese New Year confections, visit Belleville or the Avenue de Choisey (13th). The Mairie de Paris suggests these other Paris Chinatown  addresses: