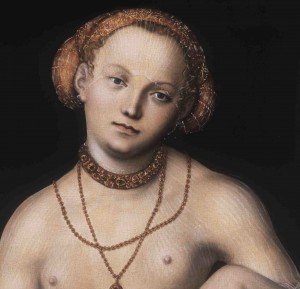 The introduction to the television series Desperate Housewives is recognizable by its branding image: Adam and Eve under a tree. Lucas Cranach, the Elder, painted it.  You may have heard of the Louvre’s fund raiser to purchase “Les Trois Grâces” for four million euros. They succeeded. The artist? Lucas Cranach, the Elder. Although his is not a household name you have just been introduced to a modern style painter of the Renaissance.

The Musée du Luxembourg, after a French Senate shutdown in 2010, inaugurated its reopening on February 9, 2011 with an exhibit of a major figure in the German Renaissance, Lucas Cranach (1472-1553).

His early woodcut drawings are reminiscent of Albrecht Dürer, who influenced him greatly. Like comic books with tons of detail, if I had had all the time in the world, I could have stared at them all day.

His initials and the year are the signature for his woodcuts. They are easy to spot. Cranach’s 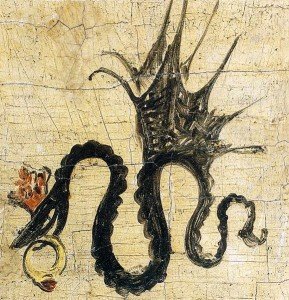 signature on his paintings is a dragon. The dragon is never in the same place. Searching for it invites the observer to study the painting, the strokes, the colors, and the details. I never did find the dragon in “le Martyr de Sainte Catherine” but I found faces and flowers and brimstone not evident at first glance.

The audio guide is a helpful tool to see and understand more of this exhibition through a professional’s eyes. It is how I learned how he possibly influenced the surrealism of Magritte and how he painted before and after Martin Luther (his close friend) and the Reformation. His patrons and diplomatic missions and travels taught Cranach how to ride both sides of the fence as he balanced his paintings for both the Protestants and the Catholic Church.

The French news magazine, le Point writes that Cranach was admired by Picasso and Max Ernst and is sometimes thought of as a Warhol of the Renaissance. The title of this article is “Cranach et ses pin-up” (Cranach and his pin-up girls).  This suggests eroticism but is far from the truth. Cranach had a moral behind his paintings. One example is “Allégorie de la Justice” who wears a veil as a dress and jewelry and the Saxon hair style, but carries the symbols of justice.

Cranach seems to have gone through a change with the Lutheran Reformation. Prior to the Reformation they are pious and innocent. After, the women in his paintings gradually become more seductive and show their “feminine wiles”. He paints their “negative character” in biblical scenes. Salomé seems to be placing more importance on her clothing and jewelry rather than the head of John the Baptist, as if ambivalent to the situation.

Cranach does have a modern style that has influenced surrealist artists, mode photographers and Hollywood. An exhibition worth the visit.

Videos about the exhibition

Musée du Luxembourg
Cranach in His Time February 9 – May 23, 2011
Practical information
Audio guide available at the museum (check their Web site or contact them about downloading it online)