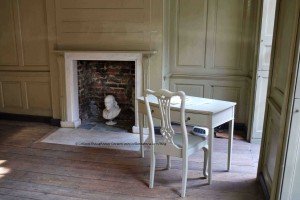 The plan for the London weekend visit was to combine historic house museums with nearby pubs as another way to discover small streets and what lies in tucked-away corners. Instead of interior decorations, I would follow in the footsteps of known contemporary Enlightenment personalities. They lived and worked in the new Georgian style homes in London during this Age of Reason in the 1700s. Three of the houses are considered among six as “hidden London houses with secretly huge historic connections“.

Benjamin Franklin lived in a boarding house that doubled as an anatomy lab with bones illegally sold to a boarder by the “resurrection men”. The home eventually became a hotel. George Frideric Handel rented his house until he became a British subject and could buy it.  His home became an antique store. The home of Doctor Johnson, who “compiled the first comprehensive dictionary” was rescued from demolition and is a London rarity for residential buildings. His home became a center for the local fire auxiliary.

I read in “London’s Strangest Tales”, of Benjamin Franklin’s 16 years of scientific experiments, his 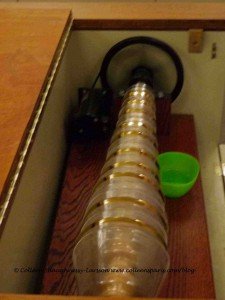 eccentricities and of the survival of this little house through the shifting of the Thames embankment, railroad station construction, war, and redevelopment. An unexploded World War II bomb that dropped shattered all of the original windows, but left the shutters, floorboards, walls, fireplaces and stoves intact. When I returned home, I pulled down from the shelf “The First American: The Life and Times of Benjamin Franklin” reviewing the numerous passages relating to his acquaintances with Mrs. Stevenson and Polly Hewson and his London stay. This house, a de facto embassy at the time, is to be admired for its historical symbolism and interior architecture and not for its furnishings. Playing the “Glass Armonica” on the architecture tour was a new and fun experience.

Handel was one of the featured artists in a “Glory of the Baroque” concert. After attending this Friday night concert in the church of Saint Martin in the Fields, Handel’s house went on the list to be explored. The Handel House Museum is sandwiched between other town houses. The wrought iron fencing has disappeared and store fronts have replaced the parlor windows. Pink doors send you around to the back to enter the museum. The house that was turned into an antique store is furnished with harpsichords, illustrations, portraits and such.  An inventory left after Handel’s death helps the Handel House Trust to restore the house. For visitors, costumes, wigs and hats are available for dress-up. They also have a “Museum Detective” handout on a clip board, which begs the eye of the detective to open and search for things. I needed help looking for the “prawn/shrimp”. 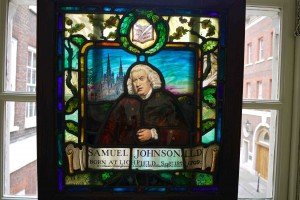 As some people collect pieces of paper, my collection is memory-stored travel articles. The New York Times published a 36 Hours in London that mentioned Dr. Johnson’s house as a “Lexicographer’s Delight”.  Dr. Samuel Johnson’s definition of  lexicographer may have described himself: “LEXICOGRAPHER: A writer of dictionaries; a human drudge….” Dr. Samuel Johnson was known for throwing in his opinion within the definitions. In the handout for children to discover the museum, one of the activities requires the discovery of unusual words and their meanings in one of the dictionaries.  As with Handel’s house, period costumes, wigs and hats are available for dress-up.

“Camelopard is a feminine noun [from camelus and pardus, Lat.] An Abyssinian animal, taller than an elephant, 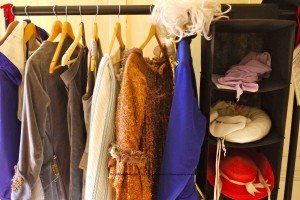 but not so thick. He is so named, because he has a neck and head like a camel; he is spotted like a pard, but his spots are white upon a red ground. The Italians call him giaraffa.”

The walls on hinges are definitely an interesting curiosity. Watch the video or read the laminated guide about the large chain across the door that attaches to the spiral hook and the wrought iron on the fanlight over the front door. The method for avoiding creditors and child thieves. (Benjamin Franklin’s house also has the chain, only a bit smaller.) 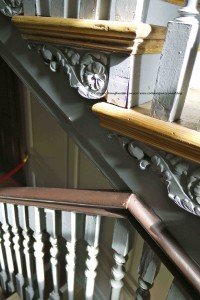 The men who lived in these homes were interesting, but the love and dedication of the restorers make for great stories. The Friends of Benjamin Franklin House purchased the Craven street freehold in 1990 and opened the museum to the public in 2006. Its foundations are still wracked by the humidity of the nearby Thames. Twenty-six layers of paint scraping revealed the original green, now known as Franklin Green. The Handel House Trust‘s devotion has been to restore walls, flooring, fireplaces and more using the inventory sheets. Their paint scraping went down twenty-eight layers to find the original paint and the chocolate brown on the doors. The house opened to the public in 2001. A Member of Parliament, Cecil Harmsworth, who opened it to the public, saved Dr. Johnson’s house from dereliction in 1911. The Dr. Johnson’s House Trust and the present Lord Harmsworth now run it. The fire brigade was using the house as a rest center and arts club when a bomb in World War Two hit it. Their expertise saved it from total destruction. Only the attic had to be rebuilt.

Places to eat and drink in these areas
Good meal
The Cork & Bottle (Wine bar)
44-46 Cranbourn Street
0207 734 78 07
Tube: Leicester Square
Close to Benjamin Franklin House
Order food at the bar. Enjoyed the vegetable share platter for dinner. Wine by the glass listed on two blackboards at the bar.
To avoid unpleasant seating, make a reservation even for lunch

Good for a pint 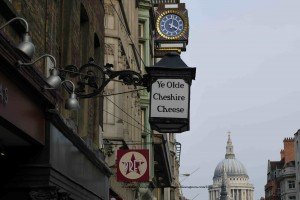 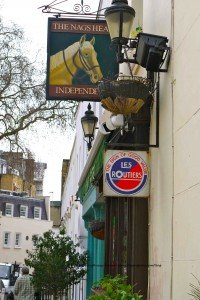 Other places to eat and drink 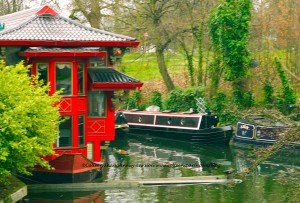 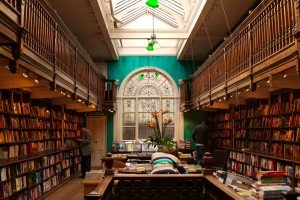 The House Museums all have special events, lectures, and concerts. 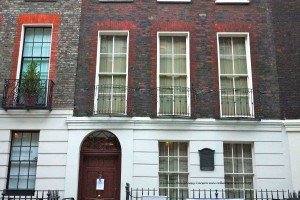 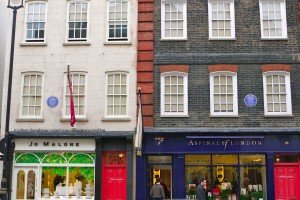 For those who love Handel’s music, seeing the harpsichords and reading the room descriptions inspires you to buy CDs in the shop. We walked away with three!
Jimi Hendrix lived next door for a short time. You can see one of his rooms on the Handel visit. Concerts on Thursday night. 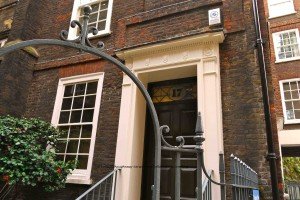