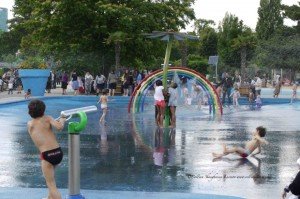 Many activities are available when you bring children to Paris.

Part of the material in this article comes from a Paris Tourist Office article.

“The Parisian Woods are a Children’s Paradise.

Children of all ages can race and cycle along the paths in complete safety and make the most of the playgrounds scattered amidst the meadows and trees and equipped with swings, slides, sandpits and merry-go-rounds. They will enjoy canoeing with their parents on one of the lakes; boats can be rented several months of the year at the Bois de Vincennes as well as the Bois de Boulogne.

Given a choice, little children would unhesitatingly opt for the Jardin d’Acclimatation on the edge of the 16th arrondissement.

It is the perfect place for pastoral walks with their grandparents and offers a tempting array of attractions, the only problem being which one to try: a merry-go-round village, a motor racing circuit, remote-controlled boats, little wooden horses, the miniature golf course and distorting mirrors. Sit in a boat and let yourself be lulled by the gently lapping water as you glide along the Enchanted River watching the impressive paddle wheel turn; weeping willows, reeds and lilies go by and ducks waddle self-importantly in front of their audience.

The puppet theater, for its part, has resounded to the laughter of generations of little Parisians. Young tourists too will enjoy the show and its noisy succession of hilarious acts, even if they don’t speak much French.

Not far away, deer, goats and kids gambol in a quiet nook, happy to be petted by children. The Jardin d’Acclimatation is also home to the bears Gaspard and Victorine, while Turkish turtledoves, parrots from Gabon, blue peacocks and purple gallinules coo, chirp and chatter in the aviary. The garden’s farmyard animals sometimes reply and young city dwellers find themselves transported to the countryside: there’s a kitchen garden, an orchard and a little farm inhabited by rabbits, turkeys, donkeys and even a pig!

The life-size Ferme de Paris extends over a five-hectare expanse in the Bois de Vincennes.

It provides a breath of fresh country air only a short metro ride from the capital, with cows, calves, pigs, sheep and the full range of farmyard animals as well as fields of the crops traditionally grown in the Ile-de-France region: wheat, barley, beetroot, maize and sunflowers. The scope is to give visitors an insight into farming life and see where the food we eat every day comes from.

Children and their parents can watch farmers feed the animals and observe seasonal farm work such as harvesting, fruit and vegetable picking and sheep shearing being done. Be warned: children generally enjoy these outings so much that you’re likely to pay several visits to the farm!”

JARDIN D’ACCLIMATATION
Jardin d’Acclimatation – in English – (Paris Mayor’s Office Web site)
Open seven days a week
Attractions: individual tickets or a book of 15.
Théâtre de Guignol: Wednesday, Saturday, Sunday and holidays.
Click on the British flag to open a .pdf document with information in English
Open: Seven days a week during the school holidays. Shows at 3 p.m. and 4 p.m. (free admission)
Workshops (cookery, gardening, calligraphy etc.) for children from 3 to 10 yrs old on Wednesday and Saturday (Monday to Saturday during the school holidays) Tel +33 (0)1 40 67 90 85

Children Activities in French in Paris