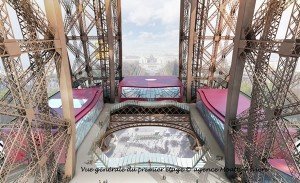 This story has been archived. Some information may have changed since publication.

The Eiffel Tower is about to provide its visitors with a step into dizzying suspension. Soon visitors to the first level will look straight down the Eiffel Tower through a plate of glass instead of looking through the fence. The idea of the architect, Alain Moatti, is to give the impression of floating above Paris.

In its third major renovation since 1889, a portion of the Eiffel Tower’s solid flooring will be transformed into a 1.5m (5 ft) wide platform of glass. An inclined glass barrier is designed to replace the present grilled fencing. The work begins February 2012 and will be available for viewing during the summer 2013.

The present buildings from the 1980s with their mirrored windows will give way to transparent, windowed buildings to give the 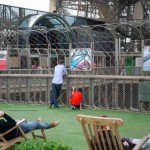 visitor the sense of openness into the surrounding space. The lateral walls framing the glass façades will be painted in the original brown-red color of the Eiffel Tower.

This first level is the most versatile level of the tower. It houses the 58 Tour Eiffel restaurant, a simple café/restaurant, exhibitions, sometimes the skating rink (the first one was installed in 1969). In 2010 the first level’s open area was transformed into a park with simulated grass, wild flowers, wood lounge chairs and bistro chairs and tables. It receives, however, only half of the tower’s visitors.

The owner of the Eiffel Tower, the city of Paris, announced that the renovations will include a 300-seat auditorium, stores, a café and museum space. The restaurant 58 Tour Eiffel façade will receive a face lift becoming as transparent as the other buildings. The cost of the work is estimated at 25 million euros. The first level  will remain open during the work and ticket prices will remain unchanged. 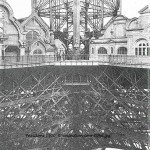 © 2011-2012 Colleensparis.com
Your HOTEL and APARTMENT RESERVATION is a contribution to maintenance costs of my Web site. Using GOOGLE helps, too. THANKS!