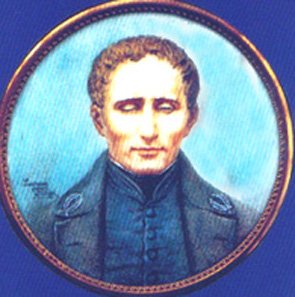 Louis Braille is the man who took the blind out of the dark ages and into the living world of readers. His home in Coupvray (Seine-et-Marne) has been a museum since 1956 and lies just outside Paris.

He was injured in 1812, at the age of three, while reaching up for one of his father’s saddle making tools. The tool pierced his eye, causing an infection, and blinded him. By the age of five the infection, which had spread to the other eye, caused total loss of his sight.

While studying at the Royal Institute for the Blind in Paris he developed the Braille writing system of six raised points and taught music. Although buried at a young age (1809-1852) next to his family in Coupvray, his body was transferred in 1952 to the Panthéon. Only a relic of his hands remains in Coupvray, in a sealed urn on his original tomb.