“Beauty, Morals and Voluptuousness in the England of Oscar Wilde” 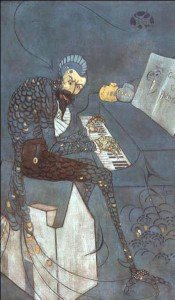 Armed with the exhibit print out from the Musée d’Orsay’s Web site, I set out to find the objects shown and read about the exhibit before I rented the audio guide.

Exhibits set up at a child’s level of understanding, usually employ a search-find method to study what’s on show. Audio guides point out details. (Check out iTunes for availability of iPhone and iPad app.)

It is a good thing I took my child mentality, because the supplier of the audio guides had pulled the plug on audio help the sales girl told me. Changes had to be made and they never reissued the players.

In the Musée d’Orsay’s exhibition salon, I decided to look for the unusual in “Beauté, morale et volupté dans l’Angleterre d’Oscar Wilde” (September 13, 2011 – January 15, 2012). I found three unusual points of interest: A painting of revenge, the source of the revenge, and Egyptian references.

Whistler’s Talents
Among the placid, pensive faces that peer from the walls is an unconventional painting. In place of the pensive, calm stare of the other paintings is a sharply shaped character looking out with a glare.

Shown in the Musee d’Orsay’s alcove is a 360 degrees digital film that rotates around a dining room to show off greenish blue walls patterned in gold. The room was originally designed by the interior architect named Thomas Jeckyll.

James McNeill Whistler, an American artist who lived and worked in England and Paris, is the artist and redecorator for both the painting of “The Gold Scab” and the wall art of the dining room (The Peacock Room).  Whistler’s painting “La Princesse du pays de la porcelaine — or The Princess from the Land of Porcelain — hung over the fireplace (take a Closer Look).

Over a controversy of payment, Whistler ended up filing bankruptcy and having to sell his home known as the “White House”. Misunderstanding of a friendship’s extent led to disdain between Whistler and Leyland.

A far cry from his paintings of women in white, his mother and others, this painting is filled with imagery. Whistler had the talent to envision an interior, basing his colors and patterns in the room on Japanese porcelain jars and his painting “The Princess”.

Whistler’s changing the room and etagere colors and patterns that Jeckyll had selected was bold. Not asking the owner of the room, Leyland, for permission to do an extensive renovation and assuming there would be payment was even bolder and assuming.

An Egyptian Source
Ancient Egyptian furniture is a reference point for the designs of chairs in this exhibit. This is the first time I am aware of references to ancient Egyptian design. It seems that Greek art is always a starting point.

Less exciting than the revenge story, the idea of Egyptian design made me curious to search out more. It is light, thin, almost delicate in appearance. I just returned from Egypt viewing temples and hieroglyphics and seeing heavy, bulky furniture sold in Cairo. The students and public, I am told, know very little of their pharaonic history and culture, apparently know little of their Egyptian furniture influence.

These three points, for me, made the exhibit more interesting.

Other Points of Interest
A marble bust of a woman turning, looking over her shoulder tells a mythological story of Ovid’s Metamorphses and uses the Aesthetic Movement’s symbol, the sunflower. The woman represents Clytie who becomes a sunflower after nine days of looking to the sun god, Apollo, wanting forgiveness. 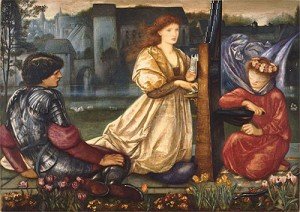 The 1865 version of “The Love Song” (Le Chant d’amour) by Sir Edward Burne-Jones displays a bellows pumping air into a tall, thin pipe organ. The bellows is worked by a figure in red wearing a scarf.

The long purple scarf blows in a breeze light enough to make the scarf appear as wings while a pale faced girl plays the organ keys and turns the pages of her book. The young fellow looks on as she multitasks. The 1868 version (not in the exhibit) lifts the blind fold and the book becomes insignificant.

There is always so much to absorb at exhibitions; it’s like taking a crash course in art, design, architecture, personalities, history, and exhibit arrangement.

The Aesthetic Movement (“Art for Art’s sake”) exhibition offers the typical period collection of a nontraditional moment in history during the Victorian era. This exhibition of art for the middle classes consists of paintings, jewelry, clothes, designs by interior architects, furniture, wall paper, the “Yellow Book”, book engravings and a large sculpture of Ethos at the end.

The museum synopsis offers a self-guided tour that encourages the curious to back track and to search out and re-examine the objects. The tour moves next to the Fine Arts Museum of San Francisco.

What You Would Have Experienced
On the walls were Oscar Wilde quotes from his writings. Some of the passage ways were very narrow. People were in non-electric wheel chairs moving independently or being pushed. A few baby carriages were there. The rooms were crowded. Occasionally, either the wheel of the chair or the baby stroller bumped into a display.

 Marcel Proust on His Mother’s Side