Photos showing life in the “belly of Paris” (le ventre de Paris)  by Robert Doisneau are on display at Hôtel de Ville in Paris. The exhibit is free, the photos of Les Halles are mostly black and white in simple black frames. Some from the 1960s, in color. No fancy matboards. No matboards at all. Les Halles was a busy place, no place to be fancy judging from the photographs. The exhibit closes April 28, however, books listed at the end of this article, will keep the exhibit alive. The catalog is available in French and English.

Video of the exhibition and what is planned.

What You Will See At The Exhibit
The photos of Doisneau show fresh and hard working faces. They are fresh because the people voluntarily look into his camera. They knew him when he came to the market place to record action now and then. His first photos were in 1933. 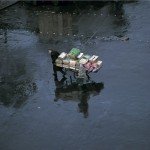 These photos are taken (1933 – 1968/1971) Pierre Delbos, a photographer friend of Robert Doisneau said that what “surprised  him”was how people would see Doisneau and come up to him. He didn’t have to ask them to have a photo taken. He says that Doisneau had a “flair”a certain way of looking at the people; he really liked being around them.

In the past it seemed the market would last forever. The later photos show a consciousness. Everyone being photographed knows that Les Halles, the market in the center of Paris is dead. They know Doisneau has come to Les Halles to record a fleeting moment. They look voluntarily into Doisneau’s lens with a happiness that seems to contradict the predicted end.

“… The exhibit is an opportunity for those were not around to see Les Halles when it was one big hole in the ground or who missed seeing the “Baltard”- designed pavilions from 1866. It is a view into the life, color and character of the neighborhood between the 1930s and 1970s …”. View some of the photographs on Picasa Web. 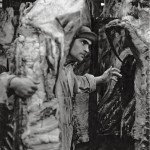 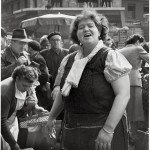 Doisneau’s project
Plans began in the 1960s to move Les Halles. Lack of modernity, limited space compared to the needs of a growing capital city, hygiene and density threatened the market’s future near Saint-Eustache.  Robert Doisneau, worried and mad, decided to rise at 3 a.m., travel from Montrouge south of Paris once a week. He “plunged into the whirlwind of activity to see, to live and to photographer everything” before the end.

He says he wanted to photograph the workers at dawn when they unloaded the trucks; be around those who set up their stands and filled them with merchandise. Filming was difficult : it was dark, fatigue slowed his reflexes, yet there was so much to photograph. At the same time, he said it was intimidating. But he became attached to the work; he knew it was going to disappear. He wanted to “absolutely record the memory”.

Doisneau’s photographs of this time have become part of Paris history, its legacy, its heritage. His photographs provide an esthetic and sociological view. He even recorded the destruction in 1971 of every bit and piece of the “belly”. He even traveled to the new “belly”at Rungis to understand and to see what became of his merchant friends. Instead of Baltard’s pavilions of decorative metal, rivets and glass, they were now in a universe of concrete. 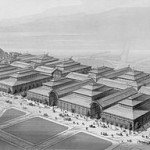 The History of Les Halles began in 1135 when King Louis VII ordered a Parisian central market. The market expanded in 1785 to make room for the flowers, fruits and vegetable markets. Due to sanitary reasons the bones from the cemetery of the Innocents were sent to the catacombs under the Faubourg de la Tombe-Issoire near Denfert-Rochereau in the 14th arrondissement.

Sanitation was an issue again in the 1800 and led to a competition to re-look the market. In 1848, the architect, Victor Baltard won for his design of pavilions. Ten pavilions were constructed between 1852 and 1870; the last two were finished in 1936.

The first six pavilions were destroyed in 1971. These Baltard pavilion frames were sold as scrap metal. Two pavilions found benefactors. One of the pavilions was dismantled and reconstructed at Nogent-sur-Marne east of Paris. The top frame of a second pavilion is in a park in Yokohama, Japan.

The RER and line 4 of the Metro were inaugurated in 1977. The shopping center opened in 1979; the parks was completed in 1986. The hole in the ground is once again partially visible. Work on the new forum will continue through 2016. One of the features will be construction of La Canopée (The Canopy) opening onto the park.

The exhibition at l’Hôtel de Ville (French page with videos)
The Parisians and tourists numbered 110,000 to see the 2012 Doisneau Paris Les Halles exhibition. Install the application from the App store for iPad.

The application offers the viewer Doisneau’s 20th century celebrated photos of Les Halles before the Baltard pavilions were dismantled, an interactive visit of the exhibition and interviews. 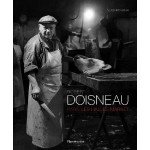 8 euros at the exhibit
by Jean-Claude Gautrand, Edition Taschen in French, English and German

Paris: The City that Napoleon Built