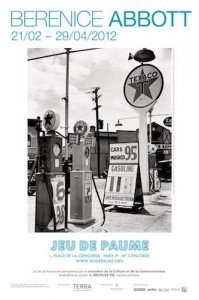 If you wonder what a woman can accomplish in a century, visit the Berenice Abbott (1898-1991) exhibit at the Jeu de Paume (until April 29, 2012). Not only was she a technician in the darkroom, a portraitist and a collector with foresight, the changing aspects of New York architecture, Americans along US Route 1 on the east coast fascinated her She invented cameras to capture movement at MIT.

(If you miss the exhibit, links are below to visit her works virtually after April 29.) Petit Journal -ENGLISH – Bernice Abbott – Jeu de Paume Exhibition

Having just seen the photographs of the Abbott exhibit, I could not help but notice one of her portraits in a shop. While passing a shelf of photography books in a museum bookstore, on the book’s spine, the photograph of Eugène Atget (1857-1927) jumped out at me. This photo of Mr. Atget, who is considered the “photographer of Paris”, was one the portraits that Berenice Abbott had taken around 1926 in sepia tones. Although the discover of Mr. Atget is credited to Man Ray; Berenice Abbott established his legacy with her purchase of his plates and prints from his estate in 1928.

Berenice Abbott was in Paris with friends she had met in bohemian New York City in the early 1920s: Man Ray, Djuna Barnes, Marcel Duchamp, Sadakichi Hartmann. With six dollars spending money and a ship’s ticket, she followed the crowd that was escaping the American political scene. Politics and Calvin Coolidge’s administration was not a friendly haven for artists. They left and went abroad to learn to be artists and writers.

In Paris, she moved in the artistic and intellectual circles of the avant-garde and surrealists of all nationalities. She wanted to be an independent woman. Ms. Abbott was a dark room technician for Man Ray between 1923 and 1926. In 1926, she opened her own studio and captured many notables in portraits, including Jean Cocteau, Marcel Duchamp, James Joyce, Man Ray, Sylvia Beach, Gide, Foujita, Max Ernst, Marie Laurencin and Eugène Atget.

She went back to show Mr. Atget the portraits one day. But he had died the year before. From his estate, Ms. Abbott bought 1,400 negative plates and 7,900 prints. The French government bought 2,000 glass plates. She eventually sold her collection to the Museum of Modern Art in New York City. (More of Ms. Abbott’s photos on the MOMA site.)

Leaving her thriving Paris studio, she left for New York in 1929 and followed the “Changing New York” with its interspersed and remaining low storied buildings butted against the new skyscrapers. For this project between 1935 and 1939 she lugged around and used a view camera; she was not a whimsical snap shooter.

In the 1950s, Berenice Abbott worked with the Massachusetts Institute of Technology (MIT) designing a method to illustrate the principles of mechanics and light for educational purposes. She invented a camera capable of capturing gravity, light waves, and magnetic fields. Her interest in science phenomena had already been tweaked in 1944 working for the magazine, Science Illustrated, where she was head of the photography department.

The exhibition includes a 55-minute video where she talks about her century and her plans to live to 102 to see in the new century; she made it to age 93. This is an exhibit, that one wishes would stay longer. With YouTube and the URL links within this story, it will.

Note: An Atget exposition opens April 29-July 29, 2012 at the Musée Carnavalet in Paris.

Berenice Abbott/Jeu de Paume YouTube video presentation with English subtitles. Some of the photos shown in the video are not in the exhibition.

Your HOTEL and APARTMENT RESERVATION is a contribution to maintenance costs of my Web site. Using GOOGLE helps, too. THANKS!

When Bethlehem Was The “Paris” Of Fashion