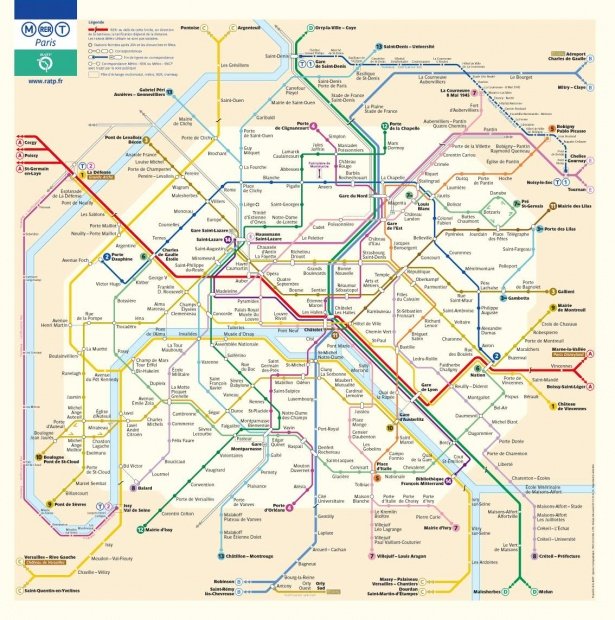 To help plan your trip pick up or download a map!

At the RATP (metro) ticket offices or the Paris Tourist office, ask for “Touristes Grand Plan Touristique”. The map is available in French, English, Spanish and German. and includes easy to read maps of the RER, locations, photos, descriptions, addresses, type of site, metro, RER or Tramway to take. Once in the towns, you can use your Ticket +t Paris metro tickets on the local bus to reach the attraction.

Using the train – SNCF-Transilien is the regional train system.

Chartres is possible to visit in a day.

About thirty-three trains per day link Chartres and the train station Paris-Montparnasse.

Synopsis of trips from the Paris lie-de-France Web site

The royal towns around Paris
Young would-be knights and wide-eyed grown-ups alike are invited to venture out for one excursion or several, over an afternoon or over a weekend, to discover the royal history of Paris and the surrounding region—the land of kings, princes and great lords.

The 13th century fortified castle at Dourdan, which dates from the days of Philippe-Auguste, provides an idea of what life was like in the Middle Ages. As does the château at Saint-Germain-en-Laye, which is now a museum outside Paris of national art treasures but over time lodged several of France’s kings.

This was before the Sun King commissioned the construction of the château at Versailles, the luxury of which would surpass that of rival palace Vaux-le-Vicomte.

Marly-le-Roi
Though the village has been in existence since the seventh century, Marly really hit the big time when Louis XIV decided to build a country residence here – something a little cozier than his home at Versailles. Built to a design by Jules Hardouin-Mansart, it was the setting for a large number of royal festivities. The village itself is a harmonious balance of prestigious buildings and green spaces.

Marly-le-Roi and its château were the exclusive realm of the King and his close associates. On view in one of the areas used for feasts and amusements is the mechanism that controlled the dancing fountains, an impressive technological innovation for the era. Now a property of the State, it is used as a residence for the President of the Republic, as is Rambouillet, a château that bears Bonaparte’s signature modern style.

Louis XIV also commissioned Fontainebleau, the city that surrounds the hunting palace where Napoleon the First inaugurated his throne room.

The royal fortress of Vincennes, which is also the oldest, was built on the eve of the 100 Years War and can be reached by taking the Metro to the edge of Paris.

Etampes, designed by the Capetian Robert-le-Pieux, was initially the place where warrior princes rested and later became the country residence of royal mistresses.

Coiled at the foot of an ancient 12th-century royal keep, the Tour Guinette, this small town is sprinkled with gothic sanctuaries and rich with numerous Renaissance mansions which recall the prosperity brought by the grain trade. It richly deserves its nickname ‘little town of art’; crisscrossed by many rivers, it’s also frequently dubbed ‘little Venice’.

Saint-Denis
Eternal repose was the domain of Saint-Denis, which is the final resting place of many whose lives shaped the destiny of this region and of France.–Paris Île-de-France 2005

Dourdan is a former royal town, and the symbol of that royal past. The fortress built in the 13th century by Philippe Auguste still stands proudly in the very heart of the old town.

A royal town and favourite place for visitors, Fontainebleau was laid out by Louis xiv between his palace and the forest and has been welcoming the great and the good for centuries. Today the palace the “House of the Centuries” and its parks are a UNESCO World Heritage Site.

We drove there once, which I do not recommend. The second visit was faster by train!

A former royal residence, the château and the delightful surrounding forest which is ideal for walking continue to attract rulers of the country: today the site is a presidential residence for the French Republic. Rambouillet also has unusual museums to offer: the Bergerie Nationale where you can learn all about merino sheep, and the Musée du Rambolitrain, covering all aspects of the rail network between 1920 and 1950.

At Saint-Denis, a historical town, you can visit the basilica, one of the strongest symbols of the monarchy. Built in the 12th century at the behest of abbé Suger, it embodies the main principles of Gothic art and contains the world’s largest collection of funerary sculpture. Not far from here, the Carmelite convent where Louise de France, the daughter of Louis XIV, once dwelled, now houses the museum of art and history. This 17th century building now presents over 600 objects discovered during archaeological excavations, a superb apothecary, a unique collection relating to the Commune de Paris as well as exhibits about Paul Eluard… Visitors should not miss the magnificent chapel by Richard Mique.

Dear to the heart of countless kings of France, from Louis CV to Louis XIV, Saint-Germain en Laye cherishes the heritage they have left: its chateau-musuem including the Grande Terrasse which overlooks the Seine valley, its 17th and 18th century mansions lining the streets of the town.

Versailles is a town devoted entirely to the cult of beauty, in the name of the will of one man, Louis XIV, the Sun King. His château, one of the most illustrious world heritage monuments, is a unique masterpiece that people never tire of visiting.

Vincennes owes its experience to Louis XII who adopted the forest of that name as his favourite hunting territory. The original rudimentary hunting lodge became a fine country manor under Saint Louis.

The Fournaise hamlet, the favorite hang out of artists and poets, has been immortalized by the most important impressionist painters and fauves.
It is now in the final phase of restoration….”. Visit the Website for the Fournaise museum for more information (in English).
For details of how to find the island, click on their “site map” link and “informations”.

How to Get There:
— RER A (red RER) depending on your departure station, the trip takes between 37 and 44 minutes
A little detail: the “A” on their home page represents the “A” in Alphonse Fournaise. He restored and constructed canoes. This “A” is on the balcony of the Fournaise home where the Renoir painting “Déjeuner des Canotiers” (Pierre-Auguste Renoir- 1841-1919) was painted.
For information about Aline Charigot who appeared in this painting and many other Renoirs, visit a French website devoted to Renoir (available in French and English). As a note: Jean Renoir (1894-1979), the director, is his son.

A reader commented that it is a cute thing to do — not an excursion for a weekend visitor — better if you are staying awhile.

Guédelon is About Building a Fortified Castle