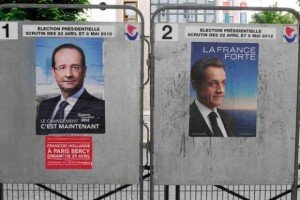 Voting in France on Sundays is very civilized, democratic and easy. The procedure seems a bit provincial. This feeling of being in the countryside is special in the big city of Paris. Our Bastille neighborhood votes at a local elementary school around the corner. It is special because there is a sense of community.

The transition is fast. Within ten days of the results, the new president is sworn in.

There seems to be no influence peddling (lobbyists) running the show.  During the election period, campaigning is done with speeches and television appearances, but handouts at the market are no where to be seen. There is no talk of spending millions on a campaign to get elected. In France, a party’s driving force is its ideology and the issues. Ideology and issues appear to influence the candidates and the voters. Laws instituted in 1988 and 1990 control French political party financial funding (use Google Translate) and its influence.

The Debate
On Wednesday, walking with my friend back to her hotel, we are in the Butte-aux-Cailles village in the thirteenth arrondissement. At a cozy bar, the side room’s interior includes dark benches, tables and chairs. The television is tuned into “who knows what”. We enter for an after-dinner drink.

Gradually, the room fills up. One of the guys, in his mid-20s perhaps, asks us ever-so politely in French if we will be bothered watching a show in French–the debate is on, he says. Another pulls out a stack of post-it notes. They are about to keep track of familiar candidate phrases and count them. The room is quiet except for the debate. When we get up to leave, one of the girls asks why we are leaving. “You can’t leave, the debate isn’t over.” This is an inspirational evening.

Voting Sunday Morning
We carry our shopping baskets (paniers) and vote on our way to the Lenoir/Bastille Sunday market. Others, push their children in a stroller or bring their roller board suitcase headed for a May vacation. As he is voting, my husband is asked to help count the votes in the first voting round in April.

During the second voting round in May, we are next in line to vote. A student, pulling his suitcase, picks up a piece of paper with the name “Nicolas Sarkozy”; leaving behind the paper marked “François Hollande”. The official says, “You have to take two!” The student takes two for Nicolas Sarkozy. “No”, she says, “One of each!” This must be his first time voting as well.

Once he makes it to the voting box, his only identification is his student photo ID. His vote is accepted. I wonder how and where he is going without either a passport or his French ID.

The whole procedure takes a matter of minutes; it is early, 9:30 a.m., and the stream of voters is steady.

In the first round of voting 86% of the population voted.

The Countdown
Voting consists of taking a piece of paper with a candidate’s name, putting it in an envelope, which goes in a box. When voting ends at 6 p.m., Paris time, officials count the papers. The results of the vote are announced two hours later.

About 6:30 p.m., Sunday, May 6, the Socialists are setting up in the Bastille (home of French and Paris unrest since forever) for the Hollande celebration party. The UMP (Union pour un movement popular) is preparing the Sarkozy reception at the Maison de la Mutualité in the fifth arrondissement.

Reporting live from their studios in the same Radio de France building, two of the main television channels have leaders from both political parties face to face. The countdown begins at thirty minutes before the results are announced. The countdown is announced at fifteen minutes. At five minutes, a clock in the corner of the television screen counts down.

The First Results
As of 10:30 p.m. the results show Hollande winning with 51.9% and Sarkozy 48.1%. No matter who were to win, there is a mess to fix. As with all countries recovering from the 2008 subprime Lehman Brothers chaos, the future requires time. Time is needed to regain some kind of balance. Nicolas Sarkozy wishes François Hollande “good luck” without sarcasm but with sincerity.  He accepts full responsibility for the loss. The celebrating voices in the Bastille have high expectations. Time will tell if Hollande costs the country money with his steps backward or if he will succeed.

The Voting Procedure
The various parties put forth a candidate. Before the first round of French elections, each voter receives, in the mail, an envelope with an A4 size poster of each candidate and the name of each candidate printed on paper (an off-white shade). 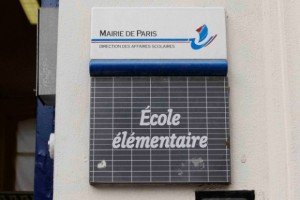 Entering the voting venue (an elementary school around the corner), the voter presents the election card (carte electorale) to one of the four officials. The voter receives a blue envelope with the words République Française printed on the front. On this table are single sheets of paper with the name of each candidate. Taking one of each, keeps the choice a secret (usually).

Voters enter a curtained booth and place one sheet of paper in the envelope. During the second round of voting, two weeks later, if the voter is indifferent to either candidate, the envelope is left empty.

The voter approaches the box and shows the electoral card and a piece of identification to an official. The official manning the clear plexiglass box reads out the name and the electoral card number. A sliding lever controls the opening, which the official slides closed once the blue envelope slides down into the box. The controlling official acknowledges your vote with the words, “A voté” (has voted).  The the electoral card is date stamped. Your name is found, you sign in the rectangle of the ruler and the vote is registered.

Statistics About Paris, Parisians and Tourists

How did le Croque-Monsieur get its name?