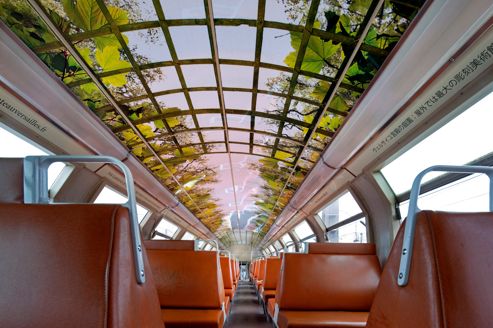 Between May 16, 2012 and the end of 2014, RER C travelers have a one in four chance to travel royally. Finding your route to Versailles/Rive-Gauche: RER/RATP Tourists – “Travelling“

You don’t know when, but at any moment, RER C travelers might be sitting in either the Gallery of Mirrors, the library, the Queen’s bedroom or under a trellis of roses. A decoration project is being promoted as a way to attract travelers heading to their everyday destination and for some all the way to Versailles.

From now until the end of the year, five RER cars will be decorated as beautiful rooms at Versailles. The decorations will benefit not only the tourists but the daily working public as well. Every day, 550,000 people use the RER C. Of that, about ten percent are tourists.

To finance this royal work of art based on photographs, Versailles is paying for the decoration and the SNCF is putting the works in place, which will take about ten days.

Tagging? The bet is the wonderful impression and the enchantment of the voyagers will infect the vandals or taggers so they are inspired to view and enjoy the cars as well. In theory, the materials used for the decoration should be resistant to any vandalism or tagging. If there is damage, the damaged piece can easily be removed and replaced from now until the end of 2014. 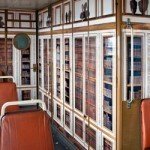 In an attempt to promote public transportation to reach the palace, the SNCF president, Guillaume Pepy, and Catherine Pégard, la présidente de l’établissement public du château de Versailles, (the President for the Public Establishment of the Château du Versalles), opened the newly painted cars on May 16, 2012. RER/SNCF/Transilien wants to make it easier and more recognizable for tourists to reach the Versailles-Château-Rive Gauche (left bank) destination and not be confused with the other: Versailles-Chantiers.

The plan is not to stop with Versailles. The Transilien director envisions doing the same to other trains on other RER lines whose stops or destinations with tourism in mind. “One could imagine that with other touristic partners similar to Versailles installing an ambiance relative to other tourist destinations”, she is quoted as saying.

Translated from the le Figaro May 16, 2012
The train car’s interior using trompe-l’oeil will enchant travelers.

How Can I Find a Paris Taxi?