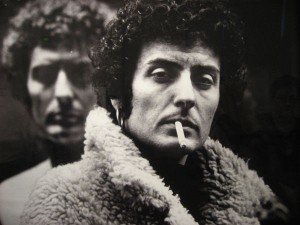 Alice Springs is the third largest town in the Northern Territory, Australia. However, from the 1970s, Alice Springs was also the working name of June Brown(e) Newton, the photographer, born in Melbourne.

The Maison Européene de la photographie is showing a retrospective of Alice Spring’s photos from the 1970s and 1980s until November 12. The theme explanations and photo descriptions are in French and English.

Alice Springs (June Newton) became a photographer by chance shooting advertisements; Gitanes cigarettes her first assignment. Looking at the photo, the curly hair of the Adonis-style model could have easily been posing for the hair stylist Jean-Louis David instead of cigarettes.

The museum’s exhibit description says the photos depict artists, actors and musicians … the roster reads like a ‘who’s who’ of the international culture scene on both sides of the Atlantic. Some of the photos are magazine commissions; others private commissions. Mrs. Newton has been a photographer for some forty years. However, this is a 1970s and 1980s retrospective. The sole portrait dated 1990 is of the campus-touring debaters, Timothy Leary and Gordon Liddy. The last time I saw them together was on stage at the University of Florida in 1983/1984.

What you will see
Perhaps because she began her working career as an actress, her subjects seem to be on stage. It is fun to look at the Jean-Louis David advertising photos in the first room. They reflect a woman’s imagination and humor in a scene although hair is the focal point.

Would a man have photographed every woman’s rainy day nightmare: Being splashed by the street cleaner?

The nun’s habit is ill fitting. Am I seeing things, or is that Helmut Newton dressed loosely as the nun?

In the mother-child portraits, most of the women seem completely unfazed if the child is wriggling, crying, not staring at the camera or being held in an awkward position.

I like the portraits of the male celebrity with his influential woman; usually a mother, sometimes a wife. The portraits of some celebrities are in settings that relate to their fame whether studios or offices; the painter painting, the writer with papers loose on the desk or Yves Saint-Laurent standing among his furniture collection holding his dog. It gives a definition of what they do and where they do it. They are uncontrived scenes from every day life, although the characters are very well-dressed for the photos.

Is it because Alice Springs shoots photos from a woman’s perspective that the subjects seem at ease?

Would I be able to tell that a woman captured these images if I did not know her name? It doesn’t matter. Through Helmut, doors opened or she opened them herself. The comfort level is evident on both sides of the lens as she shoots images of people she knows. The exhibit is worth the visit.

Something to learn
Looking at June Newton’s photos is a reminder that from exhibitions there is always something to either learn or take away to experiment with in photography. One example is looking at the background when taking a photo. It could act as a framing.

Christian Lacroix and his wife stand together as a curved branch of the vine attached to a wall acts as semi-circle frame around Mr. Lacroix’s profile.

I like the portrait of Peter Hujar, Paris, 1980, his hands raised and touching the glass through which he peers with its light reflections and the leaf shadows as background décor.

Personal thoughts after the exhibit
The photos remind me that we were all young once and looked really good! Did girls actually wear their hair like those shown in the Jean-Louis David ads? Yes, if you knew how to handle a curling iron. This is the first time I have ever seen Karl Lagerfeld without his sunglasses! What a handsome dude in Monte Carlo 1983!!

The photos in the exhibit seemed to sharpen my visual sense of the similarity among photo styles. Both a studio photographer and a photojournalist can be portraitists. Though, there is probably more money to be earned in a studio.

Upon exiting the exhibit, my inquisitive eyes register events that make me wish my camera had not been absent. Across from the museum, three girls are graphically poised looking out the window toward the corner. Others sit on ledges. They are looking toward an event that is evident once on the sidewalk. The sapeurs-pompiers care for a woman lying flat on the street. The motorcyclist who struck her moments before leans against the pillar seemingly attempting to tell his side of the story to those surrounding him. His bike lies on its side. This not an Alice Springs-style portrait.

Discover the Underworld Under Garments

Impressionist Influences on Hopper and on Fashion