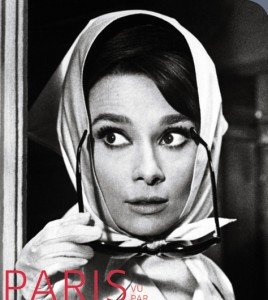 According to the curators of the exhibition, in the eyes of the American public, Paris is the expression of desire, pleasure and sophistication: Drink a flute of champagne, watching a fashion show and discuss the event; walk around the city and dance from one adventure to another. While doing this you will never have to face the reality of hitting your head, getting a head ache, being humiliated, failing or walking in dog poop!.

The films of Ernst Lubitsch, about a dozen, used Paris as a location without ever setting foot in Paris. He acknowledged that “there is the Paris of Paramount and the Paris of MGM. Then, of course, there is the real Paris.”

More than anything, the Paris/Hollywood exhibition explains to the French why global film goers, not only American now, bring with them a romantic view of the city of lights, the fashion capital, the capital of decadence and poets and philosophers, and whatever other romantic view fits into your suitcase.

The exhibit takes place at the Hôtel de Ville until December 15 and the entrance is free. Go early or during lunch, the line can be long.

American filmmakers have featured Paris in about 800 films. What is the draw for them to make so many films, invest so much money, and fabricate so many illusional truths about Paris? Therein lies the answer.

What you will see: 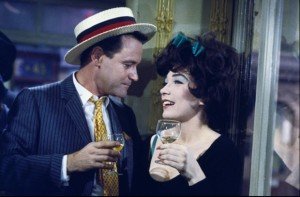 One wall becomes a twenty-meter long panoramic screen of repeating film extracts covering a century of this uninterrupted exchange between Paris and Hollywood.

Photos and an aerial view of MGM studios show the painstaking desire to reproduce Paris streets, cafés and interiors on the Hollywood film lot before the cameras moved to Paris in the 1950s to capture the real thing.

The exhibition is divided into four parts:

First part: Historical Paris in silent films where the city’s history comes alive during the Medieval period of Notre-Dame and Victor Hugo (very popular with Americans at the time); civilization and pleasure at the end of the Ancien Régime, which ran from the fifteenth century to the end of the eighteenth century. This is Hollywood’s version of historical events.

Second part: Sophisticated Paris and sentimental comedies
In the 1930s and 1940s Paris sets the bar for sophistication and eroticism. Paris is the capital of refinement, normal life is high society to which Lubitsch adds his special touch.

Maurice Chevalier embodies the French charm, the every man, with his thick Parisian accentand his signature straw hat “canotier” in Ernst Lubitch films.

Third part: The Golden Age of spectacular films in color and musicals bring the Belle Epoque to life in Hollywood’s interpretation with films such as “American in Paris” and “Cancan”. Using Impressionist paintings and the Bohemian idea of Paris, Hollywood animates the city and its life with music and song.
The American-version of a French woman sends a message to the puritanical American viewer that there usually is a price to pay free living ways.

Fourth part: Beginning in the 1950s, parts or all of a film are made in Paris. For some directors (Blake Edwards, Stanley Donen, Alfred Hitchcock, etc.) Paris becomes less decorative although still imprinted with the typical clichés. Stanley Donen’s films “Funny Face” and “Charade” are the archetype of roaming around Paris and seeing the necessary ‘must-sees’ on a tourist’s itinerary. They become a tourist office trailer of what to see when you visit Paris; much the way Woody Allen does with his opening scene in “Midnight in Paris”. His opening becomes a virtual Paris promotional guide book!

By the “New Wave” of French cinema in the 1960s it is more difficult for Hollywood to “pull off” the idealized American view of Paris and realism becomes the norm in Billy Wilder’s “Love in the Afternoon”. The film’s theme, normal by French standards is a bit risqué by American standards. The clash is between the critics, but American audiences still enjoyed the illusions of love in Paris.

In “Sabrina” Hepburn wears Givenchy as haute couture and defines Parisian chic as ballerinas, straight legged pants and tight waisted dresses, which still influence fashion and designers (and me). The styles are considered Paris classics. What Parisian woman does not own ballerinas (I have several pairs)!

In the 1960s films also turn from the cheery to action, intrigue, unsettling, and more violent.

The exhibition is an “American dream of Paris” and begins with Thomas Edison’s silent films of the 1900 exhibition: A boat ride on the Seine and a panoramic view of the Effiel tower. Edison’s images of the Seine, the people, Eiffel tower will be immortalized by the future American filmmakers. These silent films sew the seeds of American filmmakers’ fascination to prefer the history of taste or decadence over historical fact. The films of and about Paris, French history and its people will be the spirit of the truth, rather than historical truth, shown to American audiences.

Two thumbs up on the seeing this exhibition.

Toilets are located near the entrance behind the large tan sign of sponsor names.

Videos of and about the exhibition

Télérama, a French TV guide, offers a guided visit to the exhibition.  In the early 1930s the film censors decided what was morally correct. Very puritanical, Leslie Caron speaks about American mores. Avoiding the censor, especially in the 1950s, it was easier to make a movie set in Paris or finally in 1956, in Paris.

Woody Allen’s “Midnight in Paris” (2011) – Love of Paris using art and Parisian artists, Americans love the Parisian past. This is evident in recent Woody Allen films.