Hopper … The continuation of the “Impressionist Influences on Hopper and Fashion“

Edward Hopper’s paintings seem contemporary to me. As contemporary as his paintings are even today, Hopper, the man, was born before they built the Eiffel Tower. He died a year before the May 1968 protests in Paris. Hopper’s first visit to Paris in 1906 is the same year that Gertrude Stein is entertaining Pablo Picasso and Picasso paints her famous portrait. 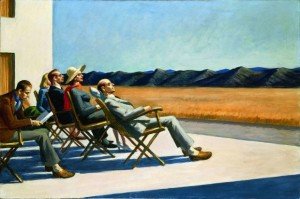 To demonstrate Hopper’s training, the Grand Palais curators hang influential painters’ works near Hoppers’ for comparisons. The Impressionist style attracts Hopper with its use of light, “harmony and sensual pleasure”.

My imaginative hindsight is in full swing: This is the one of the foundations for the nonchalance attitude of  Hopper’s own characters, his subjects who stare into the distance.

For me, the exhibition is educational; an art history lesson.

The retrospective is divided into two parts: the “formative and the art of his mature years”. The second part evokes his mature art and the first paintings that will mark his style.

The exhibit follows Hopper from 1902 through his years with Robert Henri and his visits to Paris. He discovers the sculpting effect of lighting and the dark palette that forms geometric angles, popular with the Impressionists. 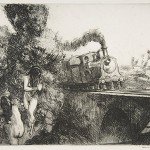 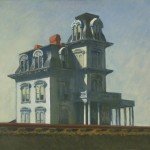 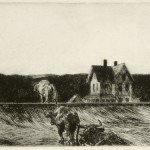 Everything changes; nothing stays the same. Perhaps this is one reason Hopper’s work has a modern feel. He is drawing, painting and etching at a time when modernity is intruding into every way of life. Train and Bathers 1920 or American Landscape 1920 as the cows must cross, nonchalantly, the railway tracks that cut straight across the etching illustrate the intrusion.

Earning a living for twenty years as an illustrator for the popular magazines: The Express Messenger, The Morse Dry Dock Dial, Sperryscope, Tavern Topics and Hotel Management, Hopper practiced a method that told a story. For him, viewers of the painting or illustration can imagine what they will.

For information and commentary about “White River at Sharon” see the exchange of information below with the author of the book, “Edward Hopper in Vermont” and Bonnie Tocher Clause.

Listen to a lecture on Soir Bleu from Whitney Museum of American Art. Buy the audio guides on line through Grand Palais.

The Multi-Cutural Background of “The Arabian Nights”