Impressionism and Fashion….the Continuation of the Post “Impressionist Influences on Hopper and on Fashion“

Emmeline Raymond Mentor des bonnes families wrote in ‘la Mode et la Parisienne, 1867’ … ‘Without a doubt the women of Paris are feminine, but they are more feminine than other women….’.

Arsène Houssaye, editor of l’Artiste, 1869, wrote that “A Parisian woman isn’t in fashion, she is the fashion….”.

Why I like the “Impressionism and Fashion” Exhibit
The time period is set when the visitor enters the exhibit. The front page of Le Figaro announces the opening of Printemps March 3, 1884. By this time, the Grand Magazin le Louvre is already in existence since 1874. Fashion rules now applied to the masses.

The French industrial revolution is said to slow down by 1850. Thanks to this revolution, clothing and accessories are mass produced for the department stores. Emile Zola’s novel, “Au Bonheur des Dames” is based on the store, Bon Marché, which dawns in 1852.

Clothes and accessories become experimental landscapes for the Impressionist’s shadows and angles. They capture light, natural and artificial, as it reflects on the various fabrics. The photographers use artificial light to highlight fashion in their studios. The sitters vary their poses for fashion plates that are given as gifts or visiting or calling cards to friends and families.

The Rules of the Day
This is an era when authors pass on etiquette instructions for dress and behavior. A handbook called “Bonne Compagnie” taught skills in how to stroll elegantly through the city.  “Lifting one’s skirt to walk more easily and allow just enough of a glimpse of one’s petticoats and the tips of the boots” demonstrates the maneuver in the Portrait of Kathleen Newton in “October” by James Tissot (1854-1882)

At this time, the Parisian lady is defined by elegant clothes but you cannot always identify their social status. They want to create an image. The purpose of gloves make the hands appear smaller and certain hats elongate the figure. 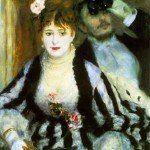 An expensive image, however, defines the man’s status and how much he can afford as shown in Pierre-Auguste Renoir’s “La Loge”. The man plays a supporting role. The woman reflects the man’s status by showing off her clothing and other finery: thus she is placed at the front of the box/loge for all to see and admire his wealth. The exhibit touches on men’s fashions, which play a smaller role in this exhibit.

Writers and painters of this period were very articulate and precise in their descriptions of fashion and the manipulation of slimming effects: Where a fabric is pleated and strategically placed panels. Dress styles were a time stamp: afternoon theatre, interior, going out, when to wear a small hat, evening theatre and opera galas, etc. The man’s outfit was required to correspond with his companion’s.

Using fashion as a contrasting interpretation of Impressionism is highly evident in the museum’s explanation of Eva Gonzalèz’s “A Box at the Theatre des Italiens”. The exhibition demonstrates the painting reflects the wrong style of dress for this evening event. In contrast, the museum curator compares the painting styles of Gonzalèz and Édouard Manet. 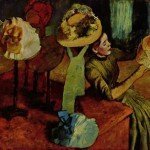 Milliners continue to hand sew hats, which is in stark contrast to the extremes of their reality. The hats in the foreground contrast with the subject in the back. The contrasting worlds  of  the wealthy who can afford made-to-measure accessories and the monetarily more poor life of the milliner who makes the hats earning low wages. You can take this deeper where at least the milliner is independent while the wealthy woman, unable to work, is dependent.

This is a fleeting period of time that leads to another age when boys no longer wore dresses and long hair until the age of 8. New fabrics would take the color black outside. Black had been a precious color worn only inside. Otherwise, the fabric could turn green or yellow with exposure to the sun.

Catalogue in conjunction with the Impressionism, Fashion and Modernity exhibition from The Costume Society.

A Rare Moment in Paris with Frank Gehry