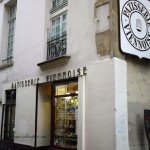 The quest is on to find those hot chocolate nooks – not the chain or the ones found in every Paris guide book.

This list contains the names and information of places I will or I have tried.

The Paris Mayor’s office has begun a list of best chocolat chauds in Paris using the bike rental Vélib as a guide.

At the George V reservations are limited to the number of people for their chocolat chauds. Our group was limited to eight in the center using a sofa and a couple of smaller tables. The chocolate was served in the traditional side-handle pitcher. A bottle of water is placed on each table and replenished as need be. The servers pour the chocolate and the water as need be. It is all very elegant and discreet. Even when they take the group photos there is no disturbance. The table is set with sugar-coated walnuts and the chocolate arrives with whipped cream and French marshmallows (guimauves).

Watch a video of how to make a quick, authentic hot chocolate with Erwan.The presenter, Erwan Garel, presents cooking lessons with the chef, Christophe Devé, on his Canal Gourmandises channel. For the chocolat chaud à l’ancienne, Erwan uses a pot he found while searching (chiner) at a flea market. He says you can use an electric mixer.

Yummy! At first I wondered “Why is it so watery?” – Because it takes time to stir it slowly and melt all the chocolate. The cream on top is yummy but should be mixed in (it is unavoidable). The Patisserie dates from 1928, according to the window. The desserts inside are a blend of French, muffins and lots of Polish favorites. The Patisserie also serves lunches in the price range of five to eight euros (blackboard). For the formule combinations, look at the menu. Eager to return and ask questions.

In answer to my question about hot chocolate with milk or water, Fabrice Stijnen of the museum replied: “Original chocolate was exclusively prepared with water, when it arrived in the French Royal Court, around 1615. First written proofs of milk use is dated from 1700.

At the Chocolate museum, we serve hot chocolate, of course. We have six recipes, and two historical recipes, the aztec one, with chili and pepper, and the ancient spanish recipe. However, we use plain milk for our hot chocolate, because european tastes prefer milk. 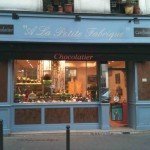 During two seasons (Easter and Christmas), they open on Sundays and Mondays. Call ahead. Tell Jean-Claude or Carol that Colleen from Colleen’s Paris sent you (maybe you will get a sample).

For powdered chocolate to make your own. They make a large variety of chocolate (dark, milk and dietetic) tablets. Large selection of ganache. Try their citronettes and orangettes (sticks of citron or orange covered in dark chocolate). I think it is the best in town: not dried out.

Mille et une Fèves requires that you call ahead for them to make the hot chocolate.

The tea salon (one table, two chairs) has delicious flavored roobos (red bush) tea to accompany their various chocolate varieties. Worth a visit.

Saying Goodbye to Icons in the Bastille Neighborhood

My Coiffeuse Wants A Cheesecake Recipe