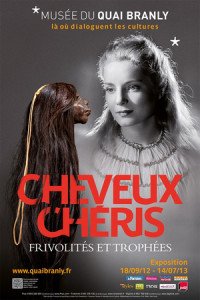 Who could ever imagine the important role hair plays in our lives. It plays a role of power, in tradition and fashion. Hair links the living to the supernatural. “Cheveux Cheris, Frivolités et trophées” is the Musée Quai Branly‘s exhibit about beloved hair, its trophies and trifles until July 14, 2013. Audio guides are available at the museum. Download the iPhone and iPad audio guide on iTunes; I found no app on Android. The advantage of download is you can listen again even after the exhibit closes.

Hair plays and has played a subtle and important role throughout history. Louis XIV was losing his hair at the age of seventeen. He needed hair. Kings since Samson wore long hair as a crown of power. What did he do? He ordered a wig and began an entire industry. In Egypt a shaved head identified someone as a high priest to the pharaoh. After the Second World War, a shaved head identified the person as a collaborator; a naked head was a sign of shame. Did you know that the most important part of the shrunken head is the hair? Why? Because it doesn’t die. Hair is a link between the living and the Great Beyond. Then there is the color of hair and the souvenirs of hair.

Hair can set the tone for your day. When I think of hair, I picture it with a personality of its own or locks on the floor at the hair dressers. For some tribes in the world that hair on the floor would have been woven into a cape. The cape would take on magic powers because of the hair. Locks of hair would preserve a memory of childhood or the departed. The power of the hair color dates from Mesopotamia when everyone dyed their hair blonde. Poets and painters envisioned their female characters as blonde in the 1500 and 1600s. Long, flowing blonde hair became a mystical image of innocence and purity like the angels. In contemporary times beginning with Marilyn Monroe, blondes replaced redheads as the incendiary, seductive femmes.