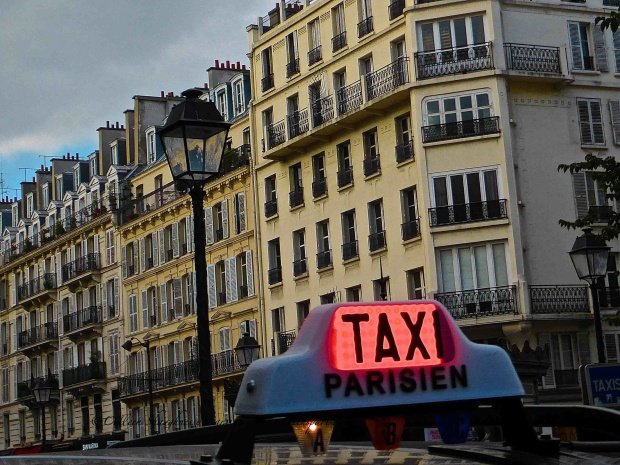 To find a taxi in the city of Paris, go to the Taxi stand with the blue sign. Once in a while you can flag down a cab. Reserve a taxi in Paris with the phone, the Web or an app on your phone or tablet. Fixed rates to and from Paris airports went into effect March 2016. One of our readers, Madelyn, suggested LeCab as an alternative to G7 for fixed prices within Paris and to and from the airports.

Need to be picked up, dropped off? Where are you going? How many are traveling? What day of the week is it? What’s the weather like? These questions could determine the taxi tariff.

Carol and three others used Taxis G7 to travel from their Marais apartment to Gare Montparnasse.
They called the phone number for Taxis G7 and reserved in English. The taxi driver was on time, courteous and they were happy.

For travel with a fixed price I have received recommendations for WeCab, part of Taxis G7. Both Website are available in English.
Reserve in advance. Make arrangements to be picked up at your apartment, airport or train station.

A normal taxi ride from CDG to the Bastille is 50 euros for one or two people. 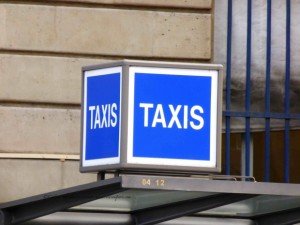 For Carol, I ruled out the RER and airport buses for the following reasons:

Taxis G7 – (TaxiBleus is now part of G7) These are the official Parisian taxis. Book by telephone, estimates cost/time, book and track, share a taxi to the airports (Website in English) (Book at least a day in advance for peace of mind if you are going to the airport or train station)

WeCab – Good for group travel with lots of bags. Call or reserve on line (no complaints so far). Website in English.

Uber – Why not to use them: not licensed by the city of Paris and uncontrolled liability insurance.

Taxi information from the Minister of Economy and Finance regarding taxis tariffs (use Google Translate).

Transportation Tips In and Around Paris