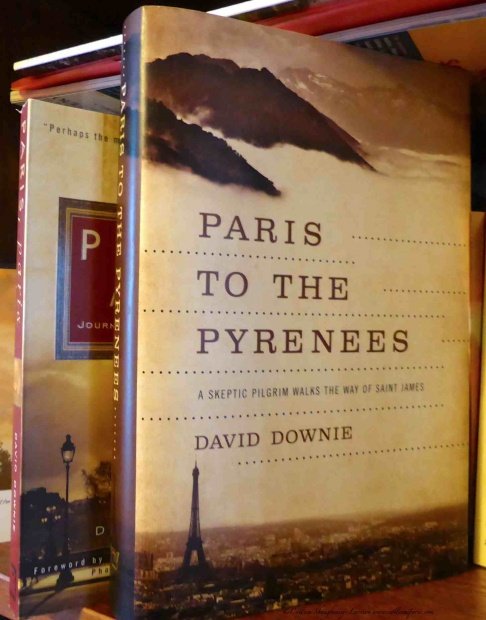 David Downie’s latest entertaining memoir, “Paris to the Pyrenées, a skeptic pilgrim walks the way of Saint James” is a series of vignettes. The book is multipurpose whose words constantly upturned my lips into a smile or a smirk.

They are the stories of a walk across France. Each story is either humorously or cleverly titled: “Beaune Appétit”, “Moats in your eye”, “Polish snail and leaping rats”, etc.

It is also a guidebook along a segment of a trail steeped in history. It is a memoir of a skeptic pilgrim’s path to self-help along the Route of Saint James. When your body is falling apart, why not have a personal quest to possess France by walking across it!

After twenty years living and working in France, David sets out to reinvent himself from the bottom up. His liver is shot, he is blind in one eye, and he has a skeptical outlook of life since childhood. Might as well set a goal and set out as a modern pilgrim on the centuries old “Way”. “The Way’s” route dates back to the Celts (about 450 BC).

David originally planned to travel alone. Allison Harris, his wife, wanted to come along. Good thing. She offers insight to David’s thinking. When Allison makes a statement, her quotes show her as the philosopher or the muse of the project to David’s pondering and searching. His reaction follows her action.

At one point David loses his wife (or is he losing his way?). He finds his wife (and does he ultimately find his way?). They are traveling with small backpacks and not laden with food, drink or computers. They are on a constant search for coffee, water, restaurants and trail food. Once in a while, they can’t find the inn either. When they do, the food is so delicious you can almost taste it.

To find their way philosophically and physically, they use the guideposts available: the locals, the inkeepers, churches and bells, Topo-guide, the Song of Roland, Julius Caesar’s “The Conquest of Gaul” and GR® Chemins de Grandes Randonnées/Long Distance Footpaths.

Each night I would read a new story of the trek of the day to quietly ponder and fall off to sleep.  It brought back memories for me. David and Allison walked in the area where my husband and I drove. We wanted to try less than famous Burgundy wines and no crowds.

For the 750-mile (1,207 km), three-month journey across France, David took the less traveled portion of the Way of Saint James.  Most of the book is the journey between Vezelay and Macon. Conversations with pilgrims along this Morvan portion of the route is limited to a handful compared to the popular Saint-Jean-Pied-de-Port/Santiago, Spain route. Annually, pilgrim hostels feed and bed twenty-five thousand pilgrims on that Compostela route. With so few pilgrims, conversations about history, past and present, are with the locals, Dutch innkeepers and other inn visitors.

David writes visually making the path, the forests, the inns, the fortress, the churches and ruins easy to imagine along the Roman via Agrippa. Allison’s descriptive photographs highlight the stories for the colorful journey over ancient paving stones of the Roman Via Agrippa.

The “skeptic pilgrim’s” journey covers centuries of history of the Celts and Romans and the recent past of the Resistance and the Occupation.

David references French and Roman history in factual and questioning fashion, asking the reader to ponder his arguments on history. For example François Mitterrand, a transplanted Morvan resident. Did Mitterrand refashion history I was left wondering. “History is only as true as what you yourself have seen,” David quotes Blaise Pascal. Pascal counseled to only believe stories whose witnesses would be willing to have their throats slit.

Assimilation in France includes regional borders, which form a personality line. Compared to the Morvan portion of the trek, once the trekkers cross the Saône-et-Loire River, the French personality crosses into a seemingly friendlier territory. One side closes its shutters to strangers, the other side is more open.

David ponders if the French demand for assimilation into their culture follows a traditional tribal reality.  The conversations with the locals and a town’s behavior give insights to the whys of French life. For example, Sylvie. Originally from Côte d’Ivoire, who believes ending the draft contributed to the lack of cultural integration into French society of suburban (banlieue) kids.

The villagers in Anost recounted in-depth war tales of the 1940s. They tell David and Allison tales of the war how every “ street in the village and every turn in the forest road, still has a memory attached.” The town is one of France’s “martyr villages” from the war. Before that it was better known in France for its four centuries of lumberjacks, supplying Paris with its chimney wood.

Another historical village is Autun. It is a town of ramparts whose foundations are older than Augustus Caesar’s bulwark and a Gothic-spired cathedral, Saint Lazare, “full of beauty and art-historical significance”.

The two trekker’s personal challenges add to the adventure: pants splitting in the middle of nowhere, getting lost or not admitting it, injuries, the gorge tumble, the creek, the stones, the scars left behind by the bikers in the dirt.

With these trek experiences, will David ultimately find his new self? Is Downie like the Saint James scallop shell, an enigmatic individual? Will the first tingles upon hearing a choir sing and the candles burning in the church turn this tourist pilgrim into a real pilgrim? Will David renounce the “pilgrim passport”? As the monk in Conques said, “The only thing all pilgrims have in common is an interior necessity–I must go, I don’t know why….”

“Paris, paris, Journey into the City of Light” book review

David Downie’s website
©Colleensparis.com
Your HOTEL and APARTMENT RESERVATION is a contribution to maintenance costs of my Web site. Using GOOGLE helps, too. THANKS!