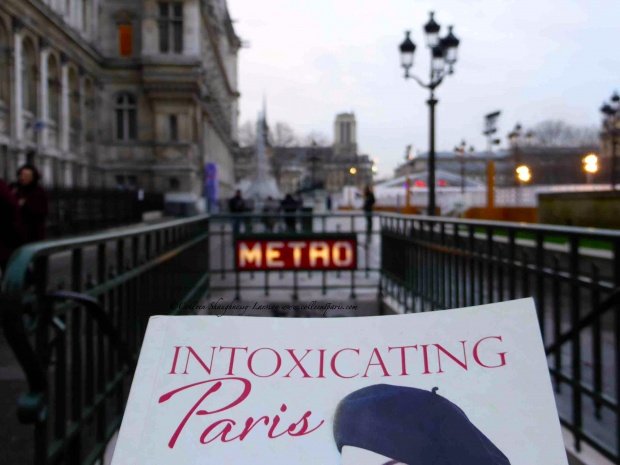 There is always something useful and something to learn in a guide book. PJ Adams‘ recent book, “Intoxicating Paris, Uncorking the Parisian Within“, is a combination of helpful hints all rolled into one. It is a personal insight, lightweight travel guide with suggestions, partial psychological and psychotherapeutic guide to American and French cultural differences, and a marketing tool for other authors. I was able to identify myself in some parts and appreciated the parts on the cultural differences. “Intoxicating Paris” is a good start for a first-time visitor.

In the first pages, PJ Adams says that she is exploring Paris as an American psychotherapist. Although I received less cultural psychotherapy than expected, I was able to take away some learning points in cultural differences. Having to look them up, I came away with new American vocabulary words and phrases and an amazing appreciation of how many people write about Paris and Parisians.

PJ Adams tells good stories about her broken leg, market experiences, the cheese tasting and the chocolate shop. In some sections of the book I had the impression that this book was written for me. Because I have lived here since 1992, her psychological and family therapist expertise aided me somewhat to understand the cultural differences between the American and French. The guidebook sections, however, offered me no new information on food, drink, fashion, shopping and precautions but they would interest a first-time visitor. She does promote authors, some Paris residents, whose works cover, food, wine, history and walks. I would have liked more of her own quotable thoughts and less of the other authors’. 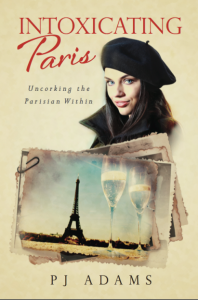 In her broken leg experience with the French medical system, she encourages the image of everything being free or cheap about the French health care system. Since 2002 the system is deficit-ridden. Her expertise in psychology could have been interesting analyzing a French citizen’s viewpoint. The French are accustomed to a certain way of life that is going through major changes. The healthcare system is a great cost to certain taxpayers (currently 50% in our household income bracket) but it benefits everyone.

Good tip from her medical experience, bring a photocopy of your prescription labels in case you need medications while visiting Paris.

In two other experiences with cheese and chocolate she gave me reason to want more information but left me hanging. My hungry heart sank when she referenced French cheeses and a cheese tasting opportunity. I wished she had mentioned the name of “the delightful chef”. Another example was the chocolate shop with glamorous photos adorning the walls in the fifth arrondissement. I want to see it, what’s the name of the shop?

I identified myself in “Feminity”. PJ Admas experiences the clothing style “size Up”. Her  “size up” was from two women, mine was from a girl between twelve and fourteen in my Bastille neighborhood. The tall girl was walking toward me and she started from my head and surveyed to my shoes in a matter of seconds. She scoped out my attire as I scoped out hers. We passed each other with our respective fashion references.

Travel guide with suggestions
In the “Creativity” chapter, I did fall under the “Intoxicating Paris” spell. I liked her sentence “Like some kind of cultural time machine, Paris doesn’t whisk you between centuries–you step into them when you merely cross the street.” I better hurry up and experience of all of Paris’ sites before the city is overrun by tourist who read this chapter.

The travel guide suggestions whether to restaurants or tea salons or shopping, are stereotypical and offer nothing new. Her references to famous authors and artists are the same as in any guide book. Where is the mention of Georges Braque since he and Picasso were famous contemporaries in the same genre, for example. Those two are an artistic sociological study. When referring to the best hot chocolate, PJ Adams stays with the common knowledge tea salon that everyone visits. Where are some other intriguing places besides the standard Angelina’s and why does everyone go to the same place?

American and French cultural differences
The “Fraternity” chapter was one of my favorites explaining the connect/disconnect relationship between the eagle (USA) and the coq (France). She gives examples of philosophical and political, business, consumption habits as well as the similarities of arrogance about freedom and liberty.

Comparing the two cultures’ schooling systems, I wanted more. She mentions one critic of the French education system, and then uses the phrase “this is up for debate” but offers no debate. The argument is left one-sided. I would have liked to have other opinions if this is a controversial topic.

The French system is currently going through changes from hours, homework and days in session. A lively debate is ensuing in France. It would be interesting if she had given references for an interested reader to check such as which newspapers, blogs and expatriate newsletters to keep up with the debate.

I wanted more of a psychotherapist’s viewpoint on each topic and how to deal with the differences between the two cultures. Instead, I was sometimes given PJ Adams’ subjective viewpoint without a solution. In the “Willpower” chapter the passage about the French habit of cutting in line warranted a solution other than “stand your ground”. This was a missed opportunity to inform the reader why and how to “uncork the Parisian within”.

Other authors
PJ Adams makes valuable references to at least thirty-three authors, quotes their book descriptions and titles. She helpfully refers to magazines such as France Magazine and FUSAC and walking tours to try.

I appreciated her referencing Jean Bruce’s spy thrillers OSS 117, which predate Ian Fleming’s James Bond series. After PJ Adams’ descriptions of the Frenchmen’s savor faire I want to read the series for more cultural education. My Swedish husband grew up in Paris and blends the best qualities of Swedish and French cultures. Now I understand him a bit more.

In the introduction, PJ Adams informed me of what lay ahead and what I might experience. The book’s table of contents uses one word descriptions for each chapter. And although the photos within the text are small, they are visible enough to bring the text alive. “Intoxicating Paris” has a printing style similar to another author’s book that I reviewed about Paris*.

I appreciate when guide books teach something new besides culture and history. PJ Adams’ uses of the very non-French words “nosh”, “ergo” and “marble paver” enlightened my French-Florida vocabulary. Requiring dictionary consulting, I learned that ergo is Latin for hence or therefore. Nosh is Yiddish/North American meaning food or snack. And a marble paver is a decorative slab.

Overlooking several typographical and French phrase errors, “Invigorating Paris, Uncorking the Parisian Within” is a good read. I enjoyed reading it from a resident/citizen point of view. Hard work goes into each book written and she obviously enjoyed writing this one. I think another Paris book could be out there for the French lover, PJ Adams.

Pamela PJ Adams is a psychotherapist and author living in California. She enjoys learning French and writing about travel, crime, self help, and other topics.

Book Review: Paris to the Pyrenées, A Skeptic Pilgrim Walks the Way of Saint James