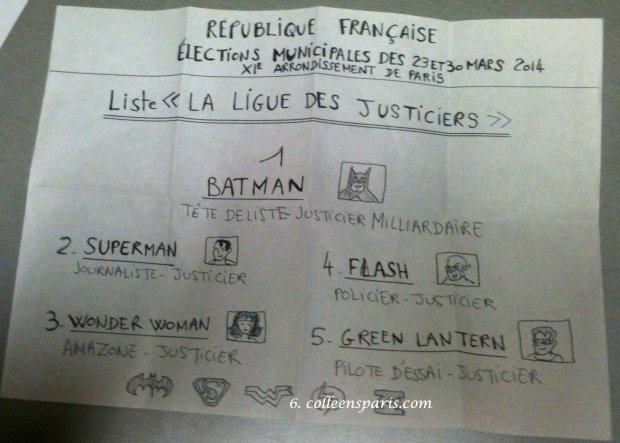 At around 8:45 p.m. Sunday, four strangers, sat down silently at Table No. 1. We were there to count votes for our precinct in the arrondissement’s mayoral election. Opening the majority of small blue envelopes with folded A4 pages produced legitimate results. Near the end of the evening, I unfolded a surprise vote in one of the small blue envelopes emblazoned with “Republique Française”. Batman received one vote and his list of legislative proposals included Superman (no. 2), Wonder Woman (no. 3), Flash (no. 4) and Green Lantern (no. 5). The original ballot was complete with icons, titles and other symbols. This ballot attracted a lot of attention, photographs, smiles and a break from the counting. 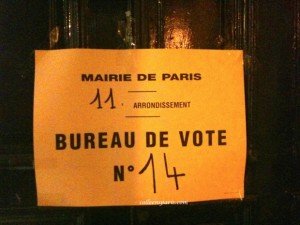 Voting Day
Sunday was voting day in Paris. It was Round 1. Round 2 is next Sunday. We were up and at the polling station, a school around the corner, at 8:30 a.m. That evening at the close of the polling station at 8 p.m. the polling workers who verified our identification now tallied up the voter list totals using two different calculators. They would calculate that it was one voter/one vote. It took at least six times before the two calculator’s numbers jived. The blue ballot envelopes were sorted into lots of one hundred and put into large envelopes.

Counting Begins
Finally, at 8:45 p.m., at our Table No. 1, as one of the counting partners opened the small blue envelopes, the other straightened out an A4 piece of paper and called out a name. Two of us had the pens and a large piece of paper called the “dépouillement” to track the ballot counting. The whole procedure is detailed in Impressions of a First Time Voter . The “caller” has to verify that it is an official ballot with no markings are on either side of the paper. After one hundred ballots, we switched. In the meantime, a rapport was building at Table 1. The other girl and I verified that we were ready to move to the next line of counting. When it was time to count our columns, we verified we had the same count. Later we found out we both counted ten too many! But the eye contact with the four of us was loosening and relaxing our spirits. Then we came to envelopes with surprises.

Envelope Surprises
Envelope surprises are accounted for and tallied as “nul”. The nuls are numbered from a list of reasons on the dépouillement sheet. Each of us then has to initial the envelope with the numbered reason. Numbers 8, 17 and 19 were the popular reasons: empty, white paper, too many non-identical ballots, etc. In a couple of envelopes, two identical pieces of A4 ballots had been neatly folded into the little blue envelope. Only one counts! Then there were a couple envelopes where someone could not make up their mind. Out! That counted as a “nul”. Someone brought a white piece of paper as a protest vote “blanc/nul”! The final surprise came when Batman and his legislators received a “nul” vote. Next time they have to properly apply to be on the ballot. Then they get a “tick” mark.

Impressions Of A First-Time French Voter

Dining Out in Paris – Book Review