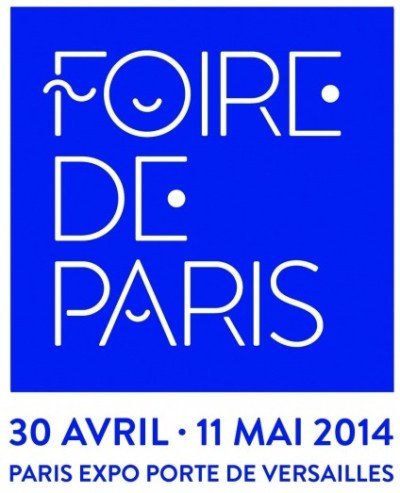 Two Paris icons were born in 1889, the Eiffel Tower and the Foire de Paris. Decorate with Eiffel Towers, but for true decorating ideas, the Foire de Paris is THE icon for the home show. Over 600,000 visitors are expected in 2014 for 3,500 exhibitors. In 1889 when the first Foire de Paris opened, over thirty million visitors passed through the pavilion of 500 exhibitors.  With a showing like that, it took another ten years to organize an official event instead of holding it only during the world fairs. The Foire de Paris developed from a World’s Fair event to an annual Paris happening in 1904. The Big Show continues April 30 until the 11th of May.

Looking for ideas to remodel your home à la Française? Discover all the possibilities. Share ideas with an expected 600,000 visitors at the Parc des Exposition Porte de Versailles (since 1924) in the south of Paris. The Approximately 3,500 exhibitors are housed within the 281,000 square feet of space. Don’t want to get lost or use the map, download the official Foire de Paris application for your device.

The trade show is split up into six sections: Home and design decoration trends, home interior make overs, furniture, and leisure activity (visit fifty countries and their cultures under one roof), beauty and well being,.And what else is Paris and French regions known for? Find out in the gastronomy and wine pavilion. New sections at the Foire this year are in design and vintage where old becomes the new. The grand prize for innovations in housewares is in its ninth year.

The Foire de Paris Website is in French, the ideas presented speak in universal tongues. The interactive Paris home show map  shows how to find three themes: Home, decorations and food; outdoors ideas and products and food from the tropics and other cultures.

Ideas and Food
How will the locals spend on average $800 during their visit to the Foire de Paris? If you can’t buy that refrigerator, you may come away with foie gras, regional cuisine, wine or kitchen utensils! Visit the 220 regional exhibitors in Pavilion 5.2  Visit fifty countries in Pavilion 4 and you may come away with a collapsable table! We needed storage space and bought our bed frame made with drawers on three sides. We work looking for a vintage style couch and chair with a 1930s look and found it with a special trade show price.

If you think a Paris hotel room is small, imagine a Paris apartment: Small. The ads in decorating magazines are deceptive. The world seems to own a large home or apartment. In reality, kitchens and living areas of Paris apartments are small! Find out at the home show, how to squeeze the necessities into small spaces: furniture, hidden drawers, hideaway beds, or squeeze your stove top, oven and dishwasher into one appliance. Bachelors! Do you want a urinal in the house? You can probably find versions of shells, flowers, venus fly traps, lips, etc. in the Salle des bains section of Pavilion 7.3.

Inventions for the Future
Trivia response: In 1901 by the Police Commissioner, Louis Lépine began the competition: Le Concours Lépine. In 1910 the coffee grinder received the Lépine award. The steam iron was honored in 1921 and the food grinder? 1931.

On an historical note, Lépine introduced the competition for inventors of small toy and hardware manufacturers. Otherwise, Lépine is known for introducing the white stick for directing traffic. He established the river-boat brigade, police bicycle units, and installed police and fire warning boxes. He originated the Musée de la Préfecture de Police in Paris, dealt with the 1910 Paris flood and the theft of Mona Lisa, captured and killed the anarchist, Jules Bonnot.

How to get in cheaply or free:

My luck was to find my item back where I had purchased two purse hooks. Each evening security collects all of the lost objects and brings them to this office, unless the people are waiting, as in my case, for the owner to return to the stand.

The Salon du Chocolat 2022 Offered Fashion and a Chocolate Bugatti