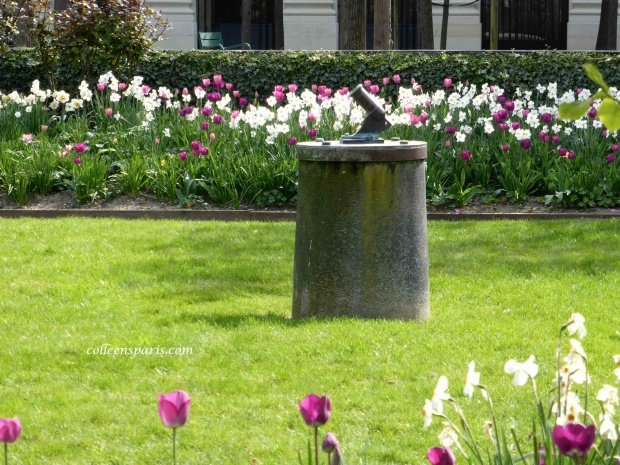 At the Palais-Royal gardens, while enjoying the spring magnolias and narcissus one cloudy, chilly Spring day in March, I noticed a little canon perched on a pedestal on the grass. The sign said that since 1990 it was once again  functioning, firing at noon every day. I believed the sign!

A week later, on a warm, sunny first of April (a Tuesday) and ten degrees warmer, the magnolia flowers had become leaves and the purple tulips now mingled with the narcissus. I pulled up a relax-backed Luxembourg chair (1923) and waited for the canon at noon. Nothing happened.

The Palais-Royal park guardian sits in a room tucked away in a corner near the Coeur d’honneur with its Buren columns. He said it never goes off and hasn’t for a long time. On line, I read that since 2011, for the benefit of Parisians and tourists, it fires on Wednesday, noon sharp! What is the truth? The investigation continues and I will return along this ancient line of the Paris meridian on a Wednesday.

A quick history of the canon
The “petit canon” first appeared in 1786 along the original Paris meridian, which passed through the gardens. A clockmaker, Mr. Rousseau, at 95 galerie de Beaujolais in the arcades, installed the canon and would set it off daily so the promeneurs could set their watches.

In 1799 it was placed in its present location. Historically, it was fired at noon on sunny days between May and October until 1914. Several renovations enabled it to work now and again until it was stolen during the night hours between April 15 and 16, 1998.

The current canon is silent most days. Word has it and must be verified that in 2011 in the interest of Parisians and tourists it once again began firing but only on Wednesday at noon.