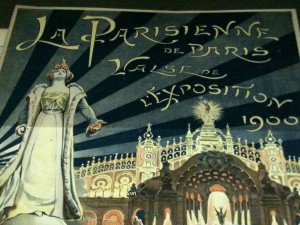 Paris 1900, the City of Entertainment (La ville spectacle) is open until August 17, 2014 at the Petit Palais. In 2013, the most visited Paris monument was Notre-Dame de Paris with over thirteen million visitors. About 27 million people visit Paris annually. The Exposition universelle de 1900 had fifty-one million visitors.

When visiting Paris, what fascinates the visitor? The Art Nouveau of the metro entrances? The Moulin Rouge? Rodin museum? Montmartre’s artists like Toulouse-Lautrec? The posters alive with swirls around Sarah Bernhardt? An Eiffel tower memento? Paris in 1900 was the City of Entertainment (La ville spectacle). Art, architecture and fashion woke up gradually during the late 1800s preparing the world for the 1900 Paris World’s Fair (Exposition Universelle). The Petit Palais in Paris was built for the Exposition universelle in 1900, which is right in step with the period.

Six sections in the exhibitions take the visitor on a trail through this Parisian Belle Epoque with over 600 works of art: paintings, objets d’art, costumes, posters, photographs, films, furniture, jewelry, street furniture and sculptures. One of the early fair architectural debates was the fate of the Eiffel Tower. It would either be transformed with two wings, reconstructed or destroyed. 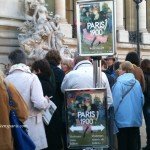 Hints – Tickets and apps
Buy your tickets in advance. Two lines form outside. Those with tickets fall into the “Visiteurs munis de billets”. That line moves smoothly. Those without tickets stand in the “Visiteurs sans billets” line, and could wait over ninety minutes.

The museum rents an audio guide, but a free « Paris 1900 » application for iPad and iPhone (with IOS7) and in the Google play store is also available. Download it before you go or once inside the Petit Palais. Included on the application is an introduction, visitor guide through twenty-one points with explanations, written commentaries and images. Included on the application are two additional art pieces outside the exhibition: “Les Halles”, which was just re-installed at the museum and a dining room designed by Guimard.

The wild and extravagant whiplash design styles of Guimard came in to fashion with the Metro entrances (referred to by some as dinosaur skeletons) along with painters and dress designers who brandished nature with no straight lines. This use of Art Nouveau was too much for some and would fall out of fashion by 1904.

French ladies took to wearing boots above the ankle. The higher sides made it easier to walk over the paving stones. The design with buttons and high sides made their ankles appear small.

The fashion houses of the Rue de la Paix attracted wealthy cosmopolitan clientele and served as inspiration for the clothes of the shopgirls (midinettes).

Artists flocked to Paris to appear at least once in a lifetime at the salon d’art show. The sculptor, Rodin, was “on the margin of artistic channels” until he received official recognition at the 1900. Carl Larsson, the Swedish painter, achieved this goal and moved proudly back to Sweden.