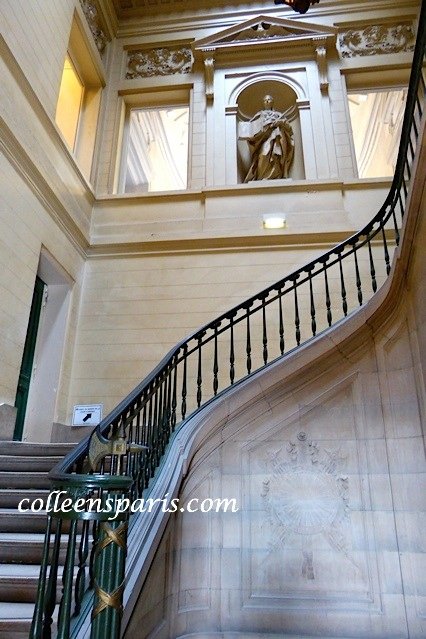 A lucky victim of a potential pickpocket scheme is Mary Kay. She recently had the tingling “beware” effect of someone’s presence and kept her wallet. In Mary Kay’s recent post on Out and About in Paris she shares tips and photos on how not to become the victim.

Undercover police save me from losing everything. This is the court follow-up to my pickpocket adventure. Beware they are still out there.

The Trial or not
On the designated date of the hearing, I chose to appear “in court”. The choice is given to waive your appearance or appear.

Winding through the halls (yes, you can visit) into back stairs of the Palais de justice, past the inner courtyard of La Chapelle and towering pillars, I made my way into the back offices of the magistrates. There was no big trial. The magistrate sat behind a desk stacked with files. The “voleur” had admitted taking the wallet before her a couple of days after the event, signed the papers and was told to report back for the hearing.

Since he did not appear, the magistrate said this reaffirmed his guilt. I signed the papers that I had appeared and that was that. End of story. 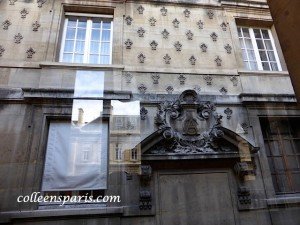 The Stolen Wallet Story
When I try to open my Longchamp backpack purse, it is a time-consuming procedure. The zipper usually hangs up. How can a tall, lanky male with long, slender fingers open the purse so smoothly that I don’t even feel it? I guess in my next life I will make two requests, one, for long, slender fingers and two, for a new Longchamp purse design!

The day of trauma is several days behind me now. The theft, catching the thief, the police carrying my wallet through the metro and the police scolding me took its toll. I am very grateful that I did not have to replace the identity cards, driver license, four credit cards, medical cards and who knows what else is in my wallet. Do you know what is in your wallet?

scolded) to not do that because it is against the French law to photograph anyone manacled or any officer of the police. The thief is placed in a three-sided glass containment cell.

The Paris police (Préfecture de Police) have published a pamphlet to download “Guide to Staying Safe in Paris”. The contents include a welcome, avoid being a victim, what to do if you are a victim and useful numbers. It also shows a specimen of a police identification card. Information including  “Paris Police Stations“

What Happened….
Changing metro lines at Palais Royal Musée du Louvre, I walked up the stairs to the platform. I had just rounded the wall that separates the stairs from the platform. The sudden commotion to the right against the wall caught my attention. It happened so quickly; seconds. I was shocked by the shouting and the roughness.
One man threw another to the ground and started shouting a word that turned out to be a woman’s name.
When she appeared, her immediate instructions to me in French were to check my purse.

After
She asked if I understood or spoke French, if I was part of tourist group.
Now I was flabbergasted! The purse was wide open and my purse was certainly lighter than usual. She took possession of my wallet and asked if what she was holding was my wallet. There went the lunch reservation and the errands, I was now being held in police custody and would not have my wallet back for another two hours.

The police had moved swiftly. They had been watching the fellow, this was not his first theft or apprehension. One officer (?) came back tired from running and very upset. The accomplice had escaped. Undercover police can be mistaken for the culprits, just as the culprits dress like normal people, including tourists.

The police never showed identity cards and I didn’t think to ask to see them. I wondered why the thief’s accomplice (?) was following us around all the time muttering to himself. Perhaps if I had asked who he was instead of asking why he wouldn’t shut up and stop muttering and scaring me, I would have found out earlier. He was the undercover cop who gave chase and not an accomplice.

The female undercover called in to find out to which commissariat we should report. The six of us made the metro journey on line 7 and switched to line 14. Watching her carry my wallet in her hand the whole time was visually nerve wracking. Two hours later I was walking out of the Gare Saint Lazare police station with my wallet and shaken. It took about 24 hours to recover and four days to be able to speak about it without crying.

I was a lucky victim. I am wearing my Longchamp backpack backwards (actually very comfortable). I wrote a thank you note on line to the Préfecture de Police. I saw my tax euros at work that day. (Miscellaneous FAQs, including emergency numbers.)
©Colleensparis.com

History of Lost and Found-Objets Trouvés in France