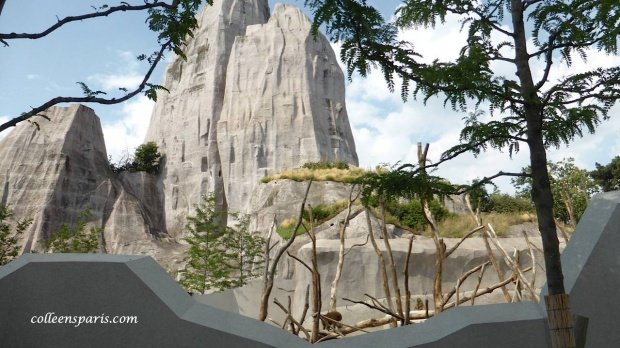 The Paris Zoo (Parc Zoologique de Paris) celebrated its eightieth anniversary with a reopening in June 2014. The six-year closure was necessary to plan renovations. The zoo had never had been renovated or upgraded since 1934.

Now, instead of being cooped in cages according to their type, the one hundred eighty park species, including the insects, birds and reptiles are grouped into five world regions. The visitor winds through the zoo on a voyage to Europe, Patagonia, Sahel-Sudan, Guyane and Madagascar following the “suite du voyage” signs through sixteen bio-zone habitats.

The larger animals, rhinoceros and zebra or the ostrich, kudus and giraffes share spaces and know when to mingle and when not to. At 4:30 pm, the park guide told the crowd giraffe anecdotes (in French). He said, that only the male giraffes are separated from the family herd. The males have visual contact but not physical. Since the females are “in heat” every fifteen days, there would be a lot of giraffe neck fights among the males and pain and suffering if they weren’t.[youtube]http://youtu.be/4wcGM0dxTag[/youtube]

For your visit
Definitely buy your ticket in advance. With ticket in hand, you walk up to the turnstile immediately. We avoided the two long 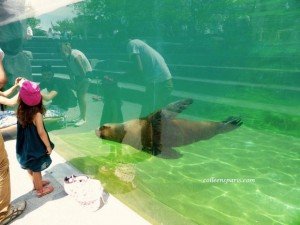 Sunday lines. If it is going to be super sunny day, take an umbrella and/or a hat. Two themed cafés are dotted along the “voyage” as the park calls your route as well as two picnic areas and marked water rest stops to refill your water bottle.

Animal feeding times are scheduled. If you are bringing the kids, consult the map online for planning the day. A map is also available when you enter through the turnstile. Unfortunately, the feeding times are only posted on site by several of the species (like the seals).

More about the area of Bois de Vincennes is on the Paris Mayor’s Website. We walked along a portion of Lac Daumesnil on our way to the zoo. The Bois de Vincennes is a great place for picnics, boating, biking and illegal feeding of the swans; all green and shady on a hot Sunday afternoon. 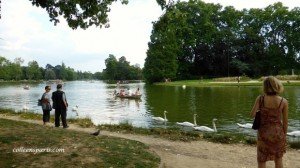 A little history
A temporary zoo was opened in 1931 at the time of the Colonial Exposition for visitors to discover “exotic” animals. The 1907 zoo in Hamburg was the architecture model for this zoo and all permanent zoos in Europe and the United States. Using the Hamburg plan, animals were caged in a “natural” setting for display in “apparent liberty”. Zoos were used to also protect threatened species. 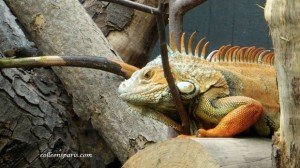 Since the opening of the permanent zoo in 1934, only the landmark bolder had been restored in 1994. The towering boulder camouflaged the electricity, water and other technical needs behind the scenes. The entire park was closed in November 2008 because the place was crumbling down. The giraffes remained during the work. All the other animals were sent to other French parks for the six years.

Fun Things For Children Near The Champs Elysées