“We were not impressed with Marché aux Puces (in Saint-Ouen/Paris) last October,” wrote Ginny. “Everything just looked picked over and probably was. Any ideas?” She and her friend want to take a train and go outside Paris and “chiner” for antiques and second-hand treasures. One suggestion to find something different is to go to a “vide-grenier”. People empty out their closets, display and try to sell their no-longer-in-use belongings on the streets of their cute little towns! The second weekend in August I visited the vide-grenier in Mézilles, France.

France Brocante and and Vide-Greniers are two websites that will help. For local Paris brocantes/flea markets/vide-greniers, pick up a copy of l’Officiel des spectacles at a newsstand. In the table of contents page (“Sommaire”) look for “Marchés et Antiquitiés”. Colleen’s Paris page of Flea Markets and Specialized Markets.

How does the France Brocante site work?
Organizers, town halls and tourist offices send information to France Brocante. France Brocante shares the information online for location, dates and type of event as soon as they find out. The information is for flea market aficionados, collectors and bargain hunters. Find the region you want, check the dates and have a fun day or weekend! (Set the YouTube setting to 720p HD) [youtube]http://youtu.be/sHw30Du-qlk[/youtube]

On the Vide-greniers website, choose either the area or the department number and find dates and times scheduled for cleaning out the attic (vide-greniers) in France, Switzerland, Belgium, Luxembourg, Canada, Guadeloupe, Martinique or Réunion Island (Ile de la Réunion). In Canada, look for the “vide-garage”. The vide-greniers is more a social event in towns where the neighbors get together and possibly give a second life to their no longer useful objects.

The vide-grenier (think garage sale) is a relatively recent activity in France. Selling your things was once looked down upon; it was better to throw them away. The practice of selling personal items in a village or town took off slowly in the 1970s and picked up speed in the 1980s. 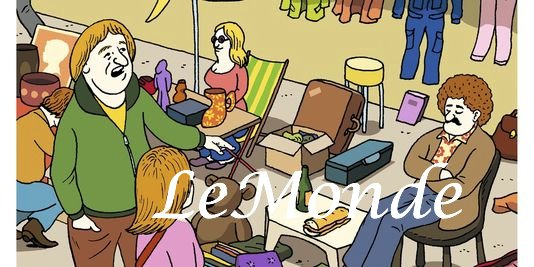 which began: “The sidewalks of France are being invaded! To play at being a merchant is the hobby of the summer Sundays. It’s all about getting rid of the kids’ toys and the bread machine you never used. Professional (“authentic”) antique dealers call it the “vide-poubelles” (emptying the garbage).”

This humorous article is full of examples of getting rid of the castoffs in a French home. On an historical note, the union of antique dealers tried to get rid of the attic and closet cleaner uppers in the 1990s. They wanted to restrict the riffraff who were actually animating their villages. At the time, the published rules said that each person was limited to two vide-greniers per year. The villagers found a way around the law. Each person in the household would sign up individually, assuring a year-round Sunday sale of whatever was used. The law forbids selling new items or food. Over the next twenty years, however, the antique dealers had a new enemy: eBay and Le Bon coin.com. In the smaller towns and villages or less chic Paris arrondissements, the prices will be better. The space fee for selling is about one to two euros a meter of space, rather than paying 15 to 20 euros a meter in chic Paris quartiers.

The article goes on to say that those who sell at the vide-grenier are sure their items are worth much more than people are willing to pay. So bargain hard (in French).

Guillemette Faure’s article ended with a thought. In searching for gold, she writes, it was usually the pail seller who earned more than the gold hunter. In this vide-grenier example, the pail seller was the café owner. After thinking long and hard about whether or not to pay 50 centimes for a pair of child’s pants, Guillemette went to a café to think. She spent the equivalent of four pairs of pants on the coffee without giving the cost of the caffeine moment a second thought.

History of vide-greniers en France
©Colleensparis.com
Your HOTEL and APARTMENT RESERVATION is a contribution to maintenance costs of my Web site. Using GOOGLE helps, too. THANKS!

Statistics About Paris, Parisians and Tourists

Love Locks Gone from the Bridge