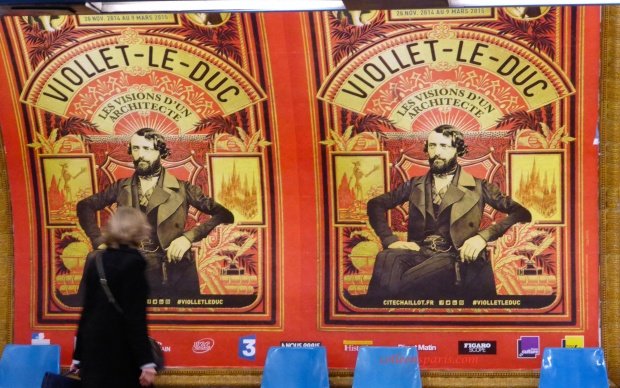 My question to Christine, my French friend, was “would you like to see the Viollet-le-Duc exhibit”? Her response was “I have already seen it, all of the French will go to this exhibit”. With French nationality, I was obliged to go, wasted no time and went. I marveled at the drawings and visions of Eugène Emmanuel Viollet-le-Duc with the rest of the French at la Cité de l’architecture & du patrimoine  (until March 9, 2015). I was already fascinated with the Notre-Dame de Paris renovator because of his unique signature left on the Paris cathedral.

Viollet-le-Duc renovated the crumbling walls of and put his imprint on about one hundred French monuments, including Vézelay, Pierrefonds, Notre-Dame de Paris, Carcassonne, Saint-Sernin. The poster for the exhibition resembles a Pierre-Jules Hetzel edition of a Jules Verne novel. Cité gives no reason for the choice of cover but my guess is that like Jules Verne, Viollet-le-Duc was seen as a visionary with an active imagination; someone who saw the future.

The exhibit has two objectives: An opportunity for the public to see for the first time a considerable quantity of newly acquired graphic drawings and writing and relate to the public the various facets of this temperamental artist. This retrospective exhibit (English and French explanations and labels) celebrates the two hundredth anniversary of his birth.

The themes of the exhibition are: A man of his times, Romanticism and voyages through France, his voyage throughout Italy, working on Sainte-Chapelle in Paris, architecture and the living organism (study of building, nature and human structure), restoration of Notre-Dame de Paris, the new décor, furnishings and decorative arts for the interior of Notre-Dame de Paris, understanding the Middle Ages through medieval architect thoughts to understand the French identity and its reason for being, Viollet-le-Duc’s desire to write and teach and pass on his knowledge, his museum and legacy for comparative sculpture. I can highly recommend the magazine Beaux Arts (hors-série) on sale at the museum shop for 7,90 euros on the exhibit and Viollet-le-Duc. All of the signage and labels are in French and English.

What I learned from the exhibit is that Eugène Emmanuel Viollet-le-Duc (1814-1879) was an artist, a climber and a very independent thinker. He grew up surrounded by an elite, influential society and absorbed the knowledge of artists, architects, writers, journalists, romantics and liberals, all concerned with conserving French monuments. Often the name of the writer Prosper Mérimée, first inspector-general of historical monuments in 1840, is mentioned in relation to Viollet-le-Duc. He was admired, detested, scorned. He was seen either as a savoir or a destroyer of medieval architecture.

One of the interactive activities at the exhibit is the Camera Lucida. Using the optical device, draw the gargoyle on a piece of paper using the eye piece.

Many of his drawings and models in the exhibit use nature, with its leaves, its swirls and its branches. The drawings predate and predict the movement, by almost fifty years, of Art Nouveau (Jugendstil in Germany, Modern in Russia, Modernisme in Catalonia/Spain, Secession in Austria-Hungary and Stile Liberty in Italy).

Viollet-le-Duc was often in the Tuilleries palace because his father worked as a civil servant for building conservation. He attended the Friday salons of his other whose guests included the writer Marie-Henri Beyle Stendahl and literary critic, Charles Augustin Sainte-Beuve. This was the era of Romanticism, Hugo, English and German travelers on the Grand Tour. Without formal training, he learned everything by doing, being tutored, observation and having a vision and vivid imagination. When he returned from Italy he was hired to work immediately in a new field of service, preservation of historical monuments.

Greatly influenced by his uncle, maternal uncle Étienne-Jean Delécluze, who himself had been a student of David, was a journalist and an art critic. They undertook several voyages through France and Italy. The voyages played a fundamental role in architecture and restoration careers. The voyages attuned his eye to nature. He learned to combine “a positivistic outlook, sensitivity and combined scientific observation with poetic vision.”

Although it is not mentioned in the exhibit, Viollet-le-Duc left his signature on Notre-Dame de Paris. A sculpture represents him on the south side of the cathedral looking up at the spire. It acts as the signature of his work and represents the apostle, Saint Thomas, patron saint of architects.

More of his designs and drawings in the Joconde portal to the collections of the French museums.

When Renaissance goes Modern in Paris