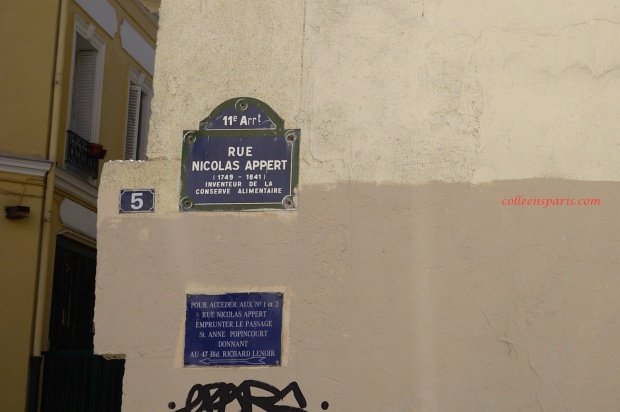 Street names in Paris are one way to discover the history of France. With over 5,000 streets, avenues, boulevards, cul-de-sacs and dead ends the name of the street often has a simply-phrased history beneath the name. An example is rue Nicolas Appert in the eleventh arrondissement. Nicolas Appert, a French confectioner who made pastries and candies, invented the method for conserving food in a tin can and lived between 1749 and 1841.

Direct Matin is one of the free metro newspapers in France. They have a section called “Pourquoi…” (“Why…”). This section is my favorite for reading tidbits of Paris and French history. I kept the January 7 edition next to my place at the dining table, meaning to read it. The stories of the day were the sales beginning and doctors on strike. I had already been to the sales that day and visited the doctor who did not go on strike. 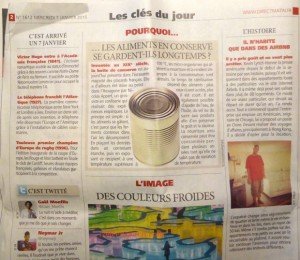 Finally, on January 14, a week later, I read Direct Matin‘s “Pourquoi…”.  The question on January 7 was about Nicolas Appert’s invention: “Why can you keep canned food for such a long time?”**. I recognized the inventor’s name, Nicolas Appert.

In one of life’s ironies, in Paris, January 7, Parisians were picking up their morning Direct Matin newspaper and maybe some bought the newly published satirical edition of Charlie Hebdo. Employees of Charlie Hebdo went to work January 7 on rue Nicolas Appert.

**The story of conserving food in a tin can (Translation from Direct Matin) – (Pourquoi…Les aliments en conserve se gardent-ils longtemps?”)

Invented in the 19th century the tin can is today found in an overwhelming majority of French cupboards. A French confectioner, Nicolas Appert, experimented scientifically. The principle is simple: if the food spoils, that’s because air decomposes the enzymes. If the food is placed in sealed container, then heated to above 100 degrees Celcius, the micro-organisms that cause food to rot are destroyed. Sterilization time depends on the type of food: the more acidic , the shorter time needed for sterilization. It is also possible to add water, oil, salt or sugar to products in order to preserve their taste and color. The conserved food can then be consumed over the course of years as long as the temperature remains consistent.

Read more about Nicolas Appert, his motivation to win a 12,000 Francs award and the fourteen-year quest to find a way to conserve food.