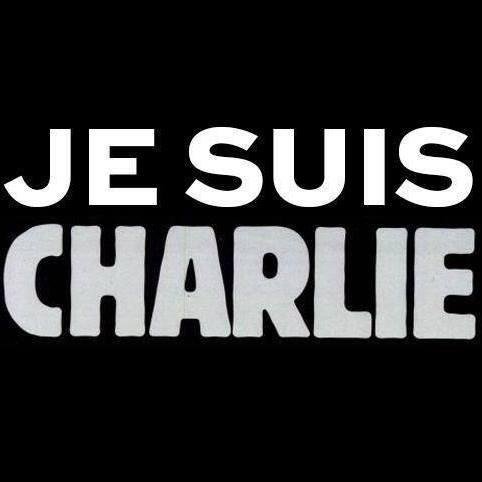 “Je suis Charlie” (I am Charlie) is the slogan used immediately after the attack at a satirical newspaper in Paris. The slogan is in memory of the cartoonists and others assassinated in Paris on Wednesday morning, January 7, 2015 near the Bastille and metro Richard Lenoir.

For anyone who writes and has an opinion and likes to express the opinion, we are all Charlie. The name Charlie represents the satirical newspaper, “Charlie Hebdo“. For Americans “MAD” magazine comes to my mind for outrageous satire. You either read it or you don’t.

The pen is mightier than the sword.  However, the pen makes one think, the sword ends all thinking. France is a country that values open expression and philosophizing, whether around a dining table, in a meeting or in the numerous media publications. I hope France never loses this valuable tool of open expression.

Yesterday, my newspaper guy around the corner, Reuben, heard the shots and the sirens. His shop was full of people in and out. All of the copies of “Charlie Hebdo” were picked up by family members, he said. A customer thought the gunmen would get away. I put in my opinion that I was optimistic they would be caught quickly. Now we know who they are. One of the idiots apparently left his ID in the hijacked car found in the nineteenth arrondissement.

They thought they killed the newspaper, “Charlie Hebdo” by killing the editorial staff during a morning meeting. Satire will continue to entertain and give thought to people for debate. “Charlie Hebdo” created a legend and legends do not die easily.

The Gawker blog summarizes some of the “Charlie Hebdo” controversy. The Times of London provides more information on the tragic event.

A Stroll on a Tightrope Stretched Across the Seine