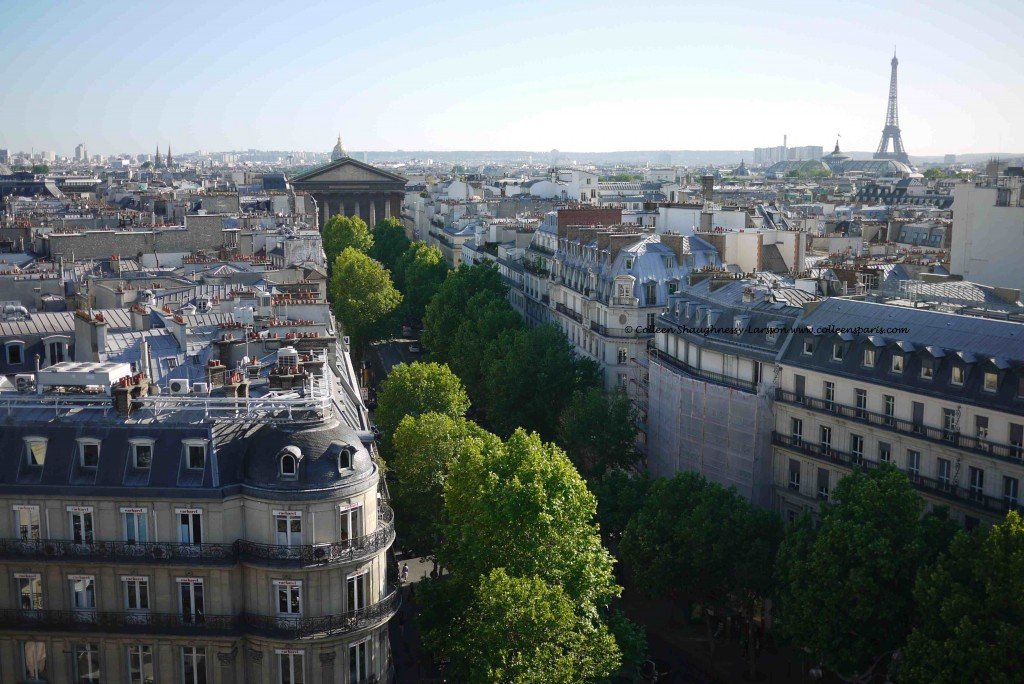 Paris restaurant terraces with views seem to be in either constant renovation stages or being added as a totally new hotel concept. Rooftops are also being used for apiculture (beekeeping) and growing vegetables. What follows is a partial list with recent updates of re-openings and temporary closings while sprucing up the accoutrements for that perfect view.

Traditional lunch or gourmet experience. Self-serve restaurant you can sit inside surrounding by glass and the Paris 360 degree view or out on the terrace. Top floor of Printemps Maison. 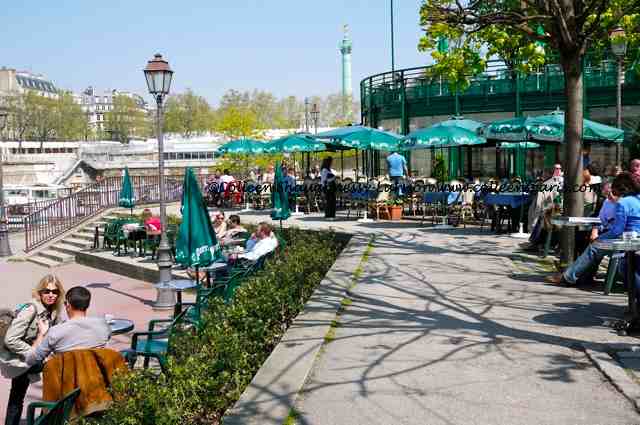 Port de l’Arsenal, in front of 46 Boulevard de la Bastille in the eleventh arrondissement
Open daily: 11 a.m. to midnight
Reservations: 01 43 45 19 99
View: overlook the boats on the Canal Saint-Martin under the shadow of the genie atop the Bastille column
Colleen’s Paris: I like le Grand Bleu (1. it is always good 2. Definitely a nice place to dine (the food is always good and is a pleasant place to dine, take a drink, a coffee, )

Terrass Hotel (formerly Le Diapason au Terrass Hotel)
12-14 rue Joseph-de-Maistre 75018
Reservations: 01 44 92 34 00
View: Over Paris. The restaurant is located on the roof top of the four-star Terrass Hotel of Montmartre. They receive about 800 calls a day to reserve a spot on the terrace when it is sunny.

Guarding the western entrance to Montmartre, the hotel closed its doors November 2014 for a complete renovation and will reopen May 2015.

Le Chalet des Iles
View: Overlooking lake in the Bois de Boulogne.
Porte de la Muette 75016
Reservations: 01 42 88 04 69
Special tidbit: The restaurant caught fire on Tuesday night, March 22, 2011. while people were dining. The fire was in a section of the restaurant under renovation. It is located in the Bois de Boulogne (75016)  Coincidentally, the Theatre de l’Elysee-Montmartre‘s interior caught fire the same day.

Restaurant Maison Blanche – Terraces
View: Eiffel Tower
15 avenue Montaigne 75008 Paris Telephone 01 47 23 55 99
Stopped in one day, and they allowed a photo opportunity.
To quote their website: “Located at 15 ‘so chic’ Avenue Montaigne, perched above the ‘Théâtre des Champs Elysées’ with breathtaking panoramic views of the ‘Dome des Invalides’ and the symbol of Paris ‘the Eiffel tower’ to name just a few.”

L’Oiseau Blanc – The Peninsula Hotel
View: Replica Nungesser and Coli’s white biplane (The White Bird), rooftops and Eiffel Tower
19 Avenue Kléber 75116 Telephone: +33 1 5812 2888
Lovely for a lunch inside or on the terrace. Retro and modern decor with plane accessory replicas commemorating the historic voyages of Charles Nungesser and François Coli.

Paris restaurants in general have terraces, plants and views – inside or out.
Some Paris plazas on the other hand have an added attraction, the feel of a small village.

Plazas are found everywhere in Paris. You have seen them in the movies. Maybe you have sat on one of the green benches next to a Wallace Fountain just because it is there. A bit isolated from heavy car traffic, but still lively, three plazas in particular are worth a visit.

One has daily, permanent markets, regulars at its café, is close to the neighborhood city hall and at the foot of a famous Montmartre landmark. Another lies close to Montmartre away from the street noise where the children play and passersby sit and watch others pass by. The third was once a convent, then a covered market. Now merchants set up their stalls selling regional goods around Christmas time and at least seven restaurants surround the plaza.

We went in search of this area down the street from the Mairie (city hall) and the OTHER side of Montmartre. When I saw the neighborhood I realized it was a rarity and that it could all disappear tomorrow…. That is what was so fantastic about this small area; it is what used to be all over Paris!

At Place Charles Bernard take a beer at le Reinitas (18 rue du Poteau) and watch everyone do their daily marketing, buy their papers and greet each other. If you area staying in the area and want to prepare a picnic, this is a great place to buy your roasted quail (caille) or chicken, cheese, veggies, fish, whatever.

Origin of the name
Charles Jean Bernard (1856-1927) was a deputy in the mayor’s office (eighteenth arrondissement).

Place Gustave Toudouze
This little community gathering point featuring the green bench and the Wallace fountain is in the ninth arrondissement. This neighborhood has plenty of little restaurants and homes; around the corner is the shadow of Sacre Coeur.

While waiting for the Katoori restaurant to open, we sat next store at the tea salon sipping a beer and watched as one of the wait staff came out and began to bring Katoori to life, laying out the tablecloths, napkins, cutlery,
etc. Katoori (4, Place Gustave Toudouze, rue Henri-Monnier) is a bring your own bottle restaurant.

We made our reservation and went to the Shopi grocery store to buy our sparking wine (Blanquette de Limoux Brut – Jean Lafon for example).  People from the neighborhood were returning home from work, the streetlights and restaurant lights were brightening up the evening, a bus passed once in a while, but the area was relatively traffic free.

Origin of the name
Gustave Toudouze (1847-1904), romantic and dramatic author and journalist.

Place du Marché Sainte Catherine
This is one of the areas you can’t help but want to pass through. It is so small, warm and inviting. Surrounded by a variety of restaurants, Jewish, Korean, traditional French, café style, and one that has food and magic
shows for adults and children.

Location, location
Metro Saint-Paul; located in the 4th arrondissement, in the Marais between rue d’Ormesson and rue de Jarente.

Origin of the name
Sainte-Catherine-du Val-des-Écoliers was a convent. Although the plaza itself dates from 1783, the layout is typical of the Middle Ages. A fountain is at the end of the Impasse de la Poissonnerie. The convent was razed in the 18th century and replaced in 1777 by the first Parisian covered market. At this time, the Impasse de la Poissonerie (around the corner) was set up to be a fish market. The fountain on the dead end street was designed and constructed in 1783 by Caron ( www.insecula.com ) for more information). By the 1930s this market was in disrepair and torn down.