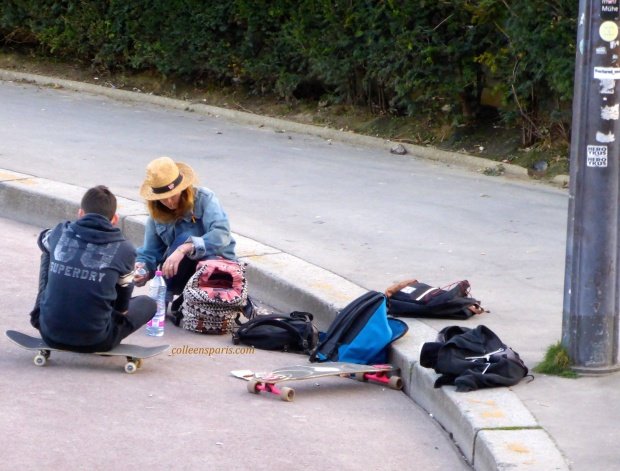 A Canadian journalist asked me how to visit Paris with teenagers. So I found out. Find some steps, a curb or grass to sit on in the afternoon. Bring a skateboard ( or longboard) to Paris and map out a city journey or practice session. Plan a picnic on a quai along the Seine or go on a bike tour. Run around the Louvre on a treasure hunt. Buy manga books or Goth and Lolita-style clothing in the Bastille area. Go shopping at any of the Paris malls or second-hand stores or go to a can-can show or how about that scary mansion in the tenth arrondissement on rue de Paradis.

Take them high to a roof top for photos and a Paris view or low to the Paris underworld Look for second-hand shops, and a real flea market in the south of Paris. Put them on a TGV for a day trip to surfing. Sensitive to cats and dogs? Have tea with the cats or admire the tombstones in the pet cemetery. Why not take a cooking or baking class or walk up the Eiffel Tower to the glass ledge. How about discovering Paris on a photo tour? The list is endless.

Where to Find these Things 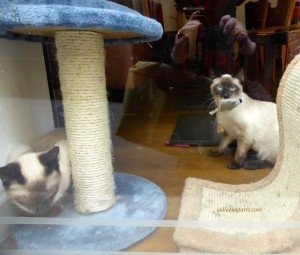 Steps are located wherever there is a hill or a building at the top. Trocadéro (Chaillot) Cité de l’Architecture; Paris Opera at the Bastille; Montmartre’s Sacre Coeur. A patch of grass is locaterd at Places des Vosges. If teenagers don’t want to walk the stairs to Sacre-Coeur, take the cogwheel train (RATP). Teenagers don’t want to walk around Montmartre? Take the Montmartre electric bus.

See the Louvre by running around. Yes, you can “do the Louvre” in a couple of hours by searching for clues in key pieces of art with THATLou (Other THATs:  THATd’Or and THATRue). Read about a Louvre treasure hunt experience.

Teenagers passionate about cats? Try one of the Café des Chats in Paris. Lines to get in the Bastille café Saturday and Sunday afternoons. Teenagers interested in a pet cemetery?  download the cemetery map.

For shopping, Paris is turning into one big shopping center with the many of the same stores in every 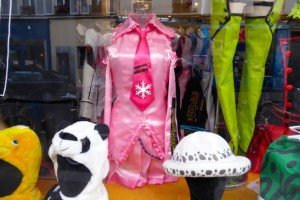 neighborhood. Poke around though and you will find small shops. Interested in Louis Vuitton’s home ? The home is on the way from the pet cemetery near the Seine and the Chateau (English guide brochure).

In the Bastille area, visit rue Keller for Bastille neighborhood designers in jewelry, clothes and shoes as well as Goth, Lolita, art galleries, manga stores. And, if you want to make that personalized family Paris tee-shirt, visit the Magic Store on rue Keller (use as keyword for restaurants and shops and images).

The (Mairie de Paris) Paris Mayor’s office blog in English. The city offers a list of articles on activities for teenagers (during the school year) ranging from dance, jazz, theatre, judo, etc. and blog for teenagers 12 to 17 (in French). The legal drinking age is eighteen, perfect for clubbing in France. Want something scary to meet teenage Parisians, try the le Manoir de Paris, always a line!

Consider the Foch bowling alley or Forum des Images for movies, nightclubbing in the former boat warehouse, at The Showcase, under the Pont Alexandre III, or the electro party at the Tunnel in Issy-Les-Moulineaux (south of Paris). Try a behind-the scenes tour of interactivity and cinema stories at the Grand Rex (Les Etoiles du Rex). For information, the websites for the Paris Tourist Office and Cultival are easier to read and follow than the official Etoiles du Rex site.

Que Faire à Paris Quand est Ado (What to do in Paris when you are an adolescent/teenager between 12 and 17) or What to do in Paris when it’s raining (page in English) – for a teenager maybe it’s raining all the time – remember back …. Suggestions include: Parisian covered passageways, the tropical greenhouses at Jardin des Plantes, different style movie theatres: Louxor, Pagode, Cinéma du Panthéon, Studio 28 with their tearooms. 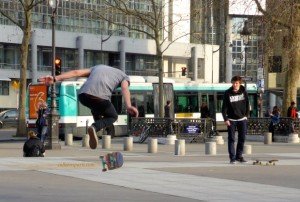 For sports activities, rent bicycles , or go skating on Friday night or Sunday afternoon with Pari Roller or anytime along Canal Saint-Martin or the Left Bank’s Les Berges. Read more on “Skating – Roller, Inline, Skateboard in Paris” for links to maps and addresses.

Take a Segway tour around Paris with Fat Tire Bike Tours, bring along your skateboard, rollerskates, foot scooter and see Paris flying over the sidewalks. Skateboard parks and venues  or type in the keywords in your browser: Paris skateparks, skateboard, rollers, skate, trottinette – They even have a streaming radio station, Radio Meuh (moo). According Wikipedia, the original skateboarding was in 1944 in Montmartre.

Roller skating on Friday night and Sunday afternoon with PariRoller Association in association with the Paris Mayor’s office. Skateboard shops are located in the Bastille area along Boulevard Richard Lenoir between rue Boulle and rue Saint-Sabin. Bike and skate along the Canal Saint-Martin .

The Catacombs, the archaeological crypts underground in front of Notre Dame de Paris and the sewers of Paris are included in other suggestions for subterranean places in Paris. Clubbing ideas are on that web page for those over 17 as well.

Some members of the American Women’s Group in Paris suggested Musée de l’Armée, cooking class at La Cuisine or Ladurée, fashion at Palais Galliera, bike tour out to Versailles, the Gourmet Chocolate Museum (Musée Gourmand du Chocolat), sitting on the rooftop of Printemps for photos,

For sports and entertainment consider the Foch bowling alley, Forum des Images for movies, nightclubbing in the former boat warehouse at The Showcase, under the Pont Alexandre III, or the electro party at the Tunnel in Issy-Les-Moulineaux (south of Paris). Discover Paris through its cinemas (blog in English) Follow them on Facebook and Twitter (for admission specials).

For teenagers who speak French

What to do in Paris (Que Faire à Paris) Que Faire in English the City of Paris blog Que Faire à Paris (French pages) offers a list of articles on activities for teenagers (during the school year) ranging from dance, jazz, theatre, judo, etc.

And the TGV Trip?

My Florida-born, fourteen-year-old nephew grew restless after general sightseeing with the family. He wanted to see the surfers at Biarritz. My sister and he split the price of a TGV ticket to Biarritz where he ate a meal, saw the Atlantic and returned late that night back to us at Montparnasse station. This was his first round trip TGV ride. The following year, he returned with his friend and spent a long weekend at a hotel on the beach in Biarritz. We were in constant contact with the hotel concierges who subtly observed their innocent and fun activities.

Toys That Speak French and Toy Stores in Paris