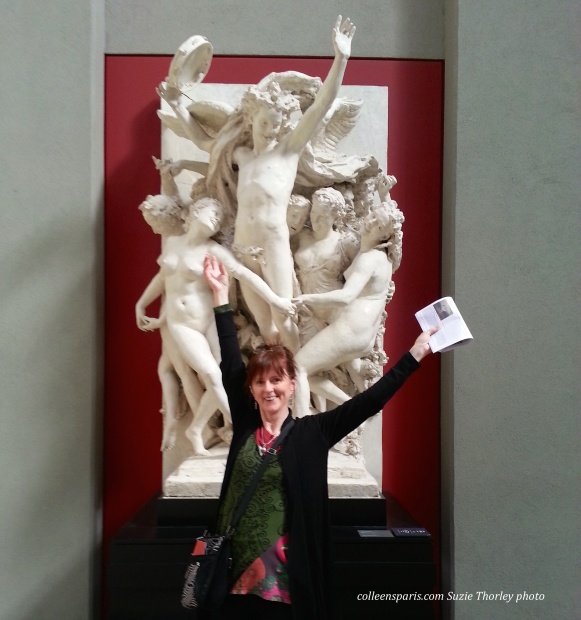 We sat under the lion statue at the Musée d’Orsay counting up our scores: four teams. The four teams: a mother and daughter (12); three teenagers; the aunt and uncle; and two retired flight attendants. The post-hunt questions: “Did you ever find that chair?”, “Where did you find Sarah Bernhadt?”, “Did you see “The Voyager” statue?, “Wasn’t it a fun way to see a museum?” Daisy de Plume scores a winner again with another hour and a half treasure hunt adventure. THATd’Or (Treasure hunt at the d’Orsay-part of THATLou) is the newest addition to her treasure trove of seeing lots of art in a short span of time. For the Orsay, the “luxury” hunts are either private or custom with four different themes. Read more on her website.

Daisy de Plume met us outside the Musée d’Orsay by the statues representing the six continents. Once inside, she took time to explain a bit of the museum’s history, how to play the game and why we can once again take photos (initially forbidden as of 2010)**. Taking photos is good news for the hunt. Photo proof is necessary for some of the treasure hunt’s bonus points.

Although the Musée d’Orsay is smaller than the Louvre, this doesn’t mean it will be easier to find the treasure. VanGogh is in two different wings and the layout is less coherent than the Louvre. Sometimes items are either so small or so obvious, you walk right by them, but your brain remembers for later! However, the race against the clock only empowers your memory cells trying to recall and remember, “Where did I see that?!” Compared to my THATLou experience (Treasure hunt at the Louvre) the museum space is smaller but the hunt still requires time, speed, patience and a fun attitude. 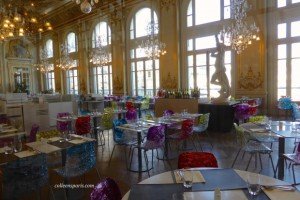 Recommend lunch at the Restaurant
The agreed end time of the hunt and counting the points was in line with an early lunch (12:30). This will avoid the crowds at any of the museum’s restaurants. This Tuesday we lunched at “The Restaurant” on mushroom soup (velouté) for a starter and and whitefish or the fish stew for the main course. We dined elegantly and enjoyably on the unique and comfortable chairs, “Nel Blu Dipinta di Blu“. Edra and the artist, Jacopo Foggini, the hand made the chairs in collaboration with the Musée d’Orsay.

A big hint: Either ask Daisy to buy your tickets or obtain your Orsay tickets in advance to save time. Read about this and the Orangerie and Rodin museum combinations and reduced rates on the Orsay admission and fees page and the Orsay Welcome page.

** References to the prohibition and reinstating of photos in Paris museums. Photos are now allowed in the Paris museums (without a flash and tripod)
Instagram of Fleur Pellerin #MuseumWeek
Minister of culture
rue89 offers more on museum photo controversy
No selfie sticks in some United States museums