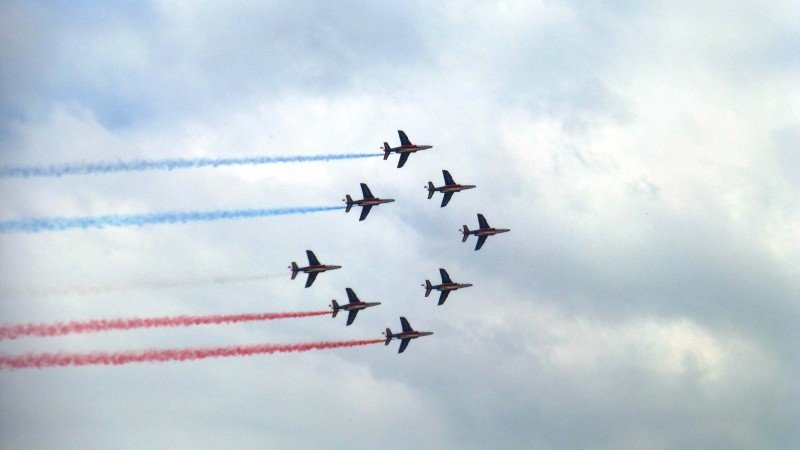 Every two years, Paris hosts the Paris Air Show trade show in Le Bourget north of Paris. Salon International Aeronautique et de l’espace is a four-day trade show; weekends (Friday, Saturday and Sunday) are open to public. Save time and buy your tickets on line. To avoid the crush of everyone leaving at 4:30 p.m. on Saturday after the air show performances, consider staying later or try visiting on Friday. Food and beverages are available, but bringing your own is the best option. Bring something to sit on the tarmac if you are not in the grandstand or on the lawn. The air show ticket is now also valid for the Musée Air + Espace (air and space museum). Visits to various planes and helicopters are available. The private jets are by invitation only. The waiting lines are long and slow. Consider visiting aircraft after 4:30 p.m. The hours are 8:30 a.m. to 6 p.m. Friday, Saturday and Sunday. 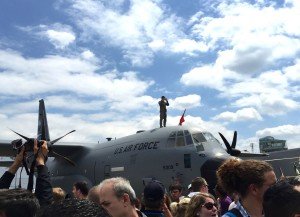 Getting in
When entering through Porte O (Hall 6), there are no formal lines. The line is French-style: orderly and bunched up. Once inside, I was told that women were being checked to the left near the Press Badge Area (déjà vu in India again?). The only woman doing the pat-down was either frustrated or going on break, so for me there was no pat down. The men took over, no pat down; I moved where I wanted. The press badge area was empty so I waltzed through there and met my husband after his security check. We took in backpacks, food and beverage without any problem. I brought a pillow to sit on; Erik a knee protector used in gardening. Other people brought folding stools, chairs or blankets.

After security, at least three different style brochures area available with maps and show times. The
professional trade show runs for four days. Some stands are still occupied; others are only left over displays, tables, chairs AND the water cooler! I filled up my water bottle on the way and luckily on the way out. Free WiFi was available and functioned well. A 30,000 sqm lawn next to the runway was available to the general public (who knew about it) for a better view. The grandstand seats 3,000.

If the Airbus 380 was the quietest aircraft, the Patrouille de France (Alpha Jet) was the most colorful (they take off about 4:49 into the eighteen minute plus video).

The App
Download the “SalonduBourget” application to your phone. Consult the app for the flying displays list and exhibitor events, list of aircraft on display with description and technical information; list of on-site services and Paris Air Show maps. With a margin of error of less than 1.6m you can find your location indoors and outdoors.

A giant screen is available to watch the flight performances while at the same time watching the sky. Further down the tarmac, speakers are set up for sound but no screens only the live performance. We sat in the area behind the grand stands and had a great view. The Airbus 380 and 350 flew low and quietly. I was watching an aircraft ballet with the accompanying music. The Dassault fighters were relatively quiet. When the JF-17 Thunder Pakistani Air Force fighter flew, the aircraft seemed so old-fashioned. It was obnoxiously loud.

We caught the 350 bus at Gare de l’Est origination point around 10:30 a.m.; although a little late for a seat. Any bus stop point after Gare de l’Est is a “good luck” situation. If you get on, the forty-minute direct ride will be cramped.

I recommend catching the 350 bus where you got off. Take it to Roissy and catch the departing bus to ensure getting a seat. If you are using a Navigo, they are “de-zoned” for the weekend. Getting home at 4:30 p.m. is challenging and took us two hours and a 35 euro taxi ride because we requested Gare de l’Est for the metro. Should have thought that one through better. The taxi driver asked where we lived. “Bastille”. Next time, he said, ask for Bastille; the distance is longer but the ride is quicker and probably only 25 euro.

The RER is available but is a walk or you can catch the navette (shuttle bus). If anyone reading this is familiar with that experience, please let me know.

Relive the 2015 event
To relive the flight show with commentary, no music, twenty-four official aircraft videos from the 2015 Paris Air Show are available on YouTube.

Water coolers, tables and chairs in the various exhibition halls left over from the professional trade show. If it is hot outside, it is cool inside.

Watch the show on the screen and live in the sky

French Rafale – since it flew over Mali the French can advertise “Combat Proven” – good for sales now.

Captain Usman had a fan club behind the ropes; flew this noisy fighter two hours later

Map for the Musée Air + Espace at Le Bourget

Inside the Air and Space Museum

What’s On in Paris – March