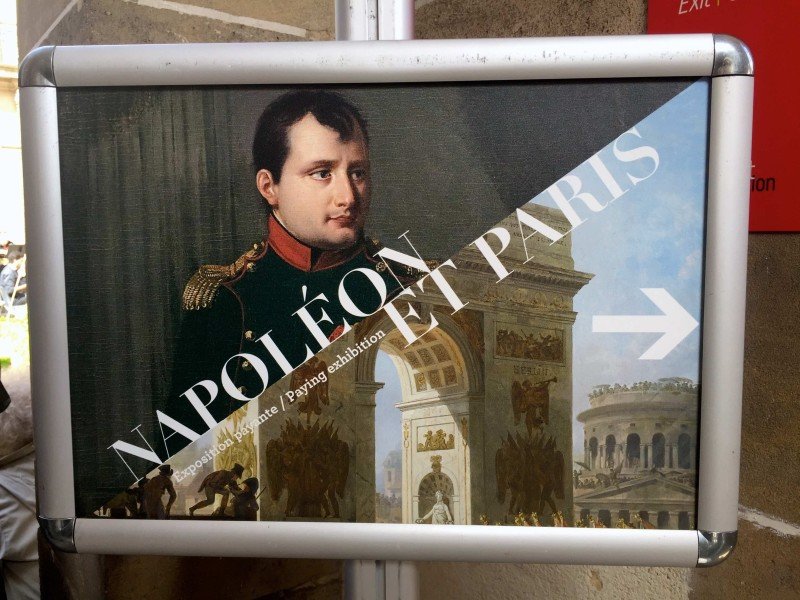 The introduction to Carnavalet’s Napoléon à Paris (Napoleon and Paris: Dreams of a Capital until August 30) began while I was crossing the breezeway across the museum garden. Against the far wall the Statue de la Victoire had arms raised over the orchestra. Entering the exhibition, I saw an impressively large bust past an archway in the distance. It had once graced the entrance of Napoleon museum. In another room, I saw the drawing of Napoleon’s desire for the original Pont des Arts, to be the model for Paris’s first metal bridge. These were just three of Napoleon’s Paris monuments.

This is a fascinating exhibit for anyone with an interest in Paris’s development after the Revolution and the influence and a certain type of love for Paris that Napoleon had. His love of Paris had benefits for him and Parisians. At the time of the Revolution, Napoleon realized he could manipulate public opinion, realize his dream of a new Rome, modernize and influence the codes of daily life in a powerful capital. His dream began to come true with the coup d’état of 18 Brumaire (9 November 1799).

The Carnavalet exhibit took me through a man’s accomplishments and plans for a Grand Paris; a desire for efficiency and uniting the Revolution’s elite and his regime’s supporters.

The three monuments mentioned
The garden’s Statue de la Victoire was originally found in Place du Châtelet (1806) atop the Palmier fountain to commemorate Napoleon’s Italian and Egyptian campaigns. The statue was replaced and the original is now in the Carnavalet museum garden. The bust comes from the Napoleon Museum (the Louvre). Vivant Denon, Napoleon’s artistic director, built a northern wing built to house Napoleon’s stolen art collection of monuments from Italy and Egypt. The beauty of the Pont des Arts drawing made me glad the love locks have been removed. Like other monuments to Napoleon, Lorenzo Bartolini’s bust to the Emperor/General/Adminstrator/Clarivoyant Napoleon was moved from its original location as was the Statute de la Victoire from the Châtelet fountain.

Paris life during Napoleon took on a new shape; shapes to be coveted: the Legion of Honour, secondary schools for training new elites, museums, libraries and state-supervised religion, the police department and Chief of Police, the fire department (Sapeurs Pompiers). It was a period that returned to a patriarchal authority and instituted the Civil Code to stabilize French society.

Napoleon’s family relations brought back all the luxury artisans who were put out of work due to the demise of the clientele who lost their heads. Napoleon was instrumental in setting demands of protocol for clothing styles, table setting and furniture for his wives, family, ministers and anyone connected to business and aristocracy. The Empire style modernized the ancient clothing styles and incorporated figurines on furniture pieces from his Italian and Egyptian conquests.

The next time you cross the Pont des Arts (cast iron), visit the Vendôme column, the Stock Exchange, the Châtelet Fountain, the Temple of Glory (La Madeleine); other bridges (Austerlitz and Cité), canals, fountains, markets, slaughterhouses (abattoirs) and cemeteries, or drink fresh water in Paris, think Napoleon. Paris life took on a new shape. The shapes to be coveted: the Legion of Honour, secondary schools for training new elites, museums, libraries and state-supervised religion.

If you would like to practice listening to French, a three-minute overview of the exhibition is available in iTunes. France Bleu (France Radio) podcast: 107.1 Ils on fait Paris et sa région: Napoleon et Paris au Musee Carnavalet.

Paris Vu Par Hollywood or How the Myth Began