On opening day, I entered the Salon du Chocolat while the afternoon sun was shining. The colorful packaging struck my eyes brightly! Entering the trade show on the second level, I was swept up globally and landed in Brazil. After doing a tasting I bought three squares of various Brazilian chocolates from Mendoá: café, ginger and 80% with cocoa feves with in my first ten minutes on site. I had to watch that my cravings did not get near my purse… My taste buds were set to seek out the unusual in this year’s Salon du Chocolat. By the time I left this vast array of packaging three hours later, the sun had set. I was not craving chocolate any longer, but the pavilion did look like one big box of chocolate.

I decided to go for the best hot chocolate and worst, most unusual, little known facts, history and design, the chocolate dress (pre-fashion show). An unexpected surprise was the competition of the Chocolate Masters. During my global chocolate journey on two levels, I tasted the wares of about eleven exhibitors out of the hundreds from about forty different countries..

Worst hot chocolate: La Boutique Caron (two euros for a medium size cup of watery, tastes-like-the-paper-cup hot chocolate). I had to throw it away.

Best chocolate: Willie’s Cacao uses the single estate principle of “bean to bar” – no blending with other chocolate beans – one farmer. I could not believe the tastes in my two favorites, Peruvian Gold and Indonesian Gold. No flavorings added. The Peruvian chocolate was full of raisins and plums and the Indonesian was just as the label said “soft caramel notes”.

Most unusual chocolate combination: Fromages de montagne their cheeses were sprinkled inside and out with chocolate. Best tasting blend was la Meule du Jura.

Little known facts: Japan is the fifth largest chocolate producer in the world among the top ten. Candy was once meant only for children (but children grow up). Now Meiji is producing for the tastes of adults and seniors. The “strong” 71% is being released next year.

History and design: Le mouchoir (handkerchief) de Cholet – white chocolate colored red coating almond paste with a taste of almonds and hazelnuts and hint of orange. The history from their handout: “Wars in the Vendée were raging. During the battle of Cholet, founght on the 17th October 1793, the General Henri de la Rochejacquelein was wearing three white handkerchiefs so as to be easily recognized of his troops. But after the battle, handkerchiefs were red….dripping in blood. Now, Cholet displays this little red handkerchief as an emblem to preserve the memory of what they had stand up to during the French Revolution (sic).”

Design: Cake and pastry forms reminded me of my visit to the Pierre Cardin Museum. He used similar forms in his dress designs.

Fashion Show: When I first walked around the upper floor, a chocolate dress was isolated on a platform near the escalator. I took some photos and then security moved in. The men, complete with ear pieces, picked up the description sign and by the time I returned, the Philippe Bernachon & Florencia Soerensen dress …. was gone!

At the 5 pm fashion show a model was wearing it on the catwalk. All of the models had to move very carefully. No bouncing or else the bonbons, roses, ribbons, macarons, sheets of chocolate, etc. would tumble or break off.

If you do not have a front row seat I recommend a side viewing spot along the wall under the tent. If you see a security man clearing a path, act like Parisian motorcycles and follow his path. Then you can slip in for a potentially good vantage point. Many spectators begin leaving before the final parade with the chocolatiers and designers.

Chocolate Masters: When I saw the chocolate masters (Cacao Barry World Chocolate Masters event) they were preparing small items for the next sculpture in the competition. Their current works were on display outside the glass enclosed kitchens. 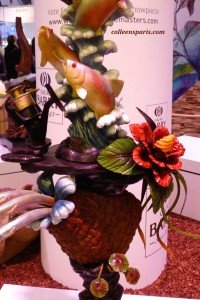 During the trade show you can watch live streaming of the kitchens and the chefs and past day’s activities on the YouTube link for World Chocolate Masters Final 2015. Watching the video of the event is quite suspenseful, especially when you suddenly see chocolate pieces on the floor and the emotional reactions of the chef. The delicate sculptures sometimes break (Sabine Dubenkropp from Germany explains this in one of the videos). The 2015 theme is “Inspiration from Nature”. Twenty world chefs are competing for the championship with eliminations every day.

History of the Salon du Chocolat in one bite
The idea germinated in 1995 with a common interest between Sylvie Douce (event planning) and François Jeantet (architect). I went to the salon once when it was in the Carrousel du Louvre between 2001 and 2003. Read more at History and Facts Salon du Chocolat 2015. Throughout the year, shows are held in Paris, Lyon, Marseille, Toulouse, Brussels, London, Milan, Monaco, Beirut, Japan, Moscow and Chocolate Week in the UK.