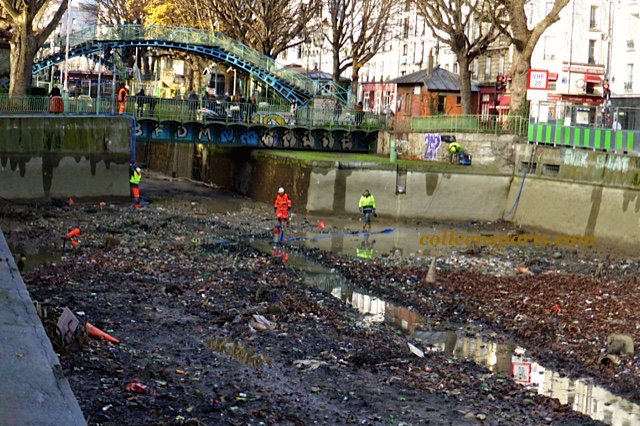 Every fifteen years, Paris undertakes the cleaning of Canal Saint-Martin. In river vocabulary, “Chomage” is the process of completely emptying and cleaning a canal. The last “chomage (unemployment)” was fourteen years ago. Was I in Paris or flying across the Atlantic? Not wanting to rely on memory, I grabbed the camera. The sky was blue as I headed from the Bastille where the canal disappears under the promenade along Boulevard Richard Lenoir to République where it once again resurfaces. The Saint Martin Canal is one of Napoleon the first’s projects to provide drinking water to Paris. Construction began in 1805 and it opened in 1825.

As I exited the metro at République the blue sky gave way to a change in the weather. Between two hail showers, I captured some images, including a native bird to the canal, the bergeronnette. The canal floor was still full of bicycles, strollers, tables, chairs, shopping carts, bathtub, lawn chair, etc. stuck in the muck. Only one firearm was found they say. The work is ongoing between January 4 and April 4 when five tons of pike, roach, perch, catfish will return to the basin and the nine locks and two swing bridges will once again welcome back the canal tourist boats and promenaders.

The television station, France 2, posted a video about Canal Saint Martin showing some of the first days of debris. Images in a video from the Mairie de Paris (Paris mayor’s office) on draining Canal Saint Martin is also available.

To read France 2’s and the city hall’s Website in English, use Google Translate. Visit this site for