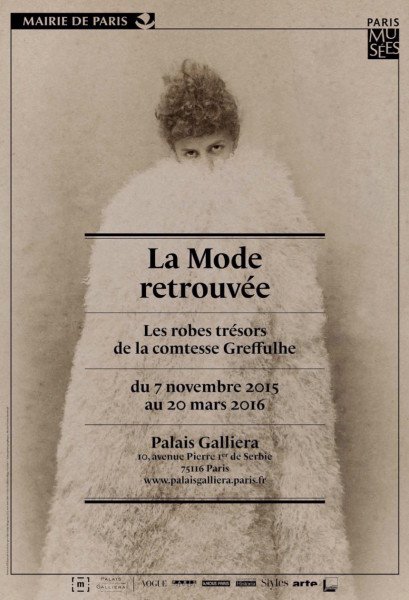 The Comtesse Greffulhe did not follow fashion, she dictated fashion for all in Paris society to follow. She inspired Marcel Proust and fashion designers. Until March 20, 2016, Palais Galliera, Musée de la Mode, is displaying Comtesse Greffulhe’s wardrobe collection “La Mode retrouvée” (Finding lost fashion).  The collection moves to New York’s Museum at FIT in September 2016 under the title “Proust’s Muse”.

As with most women who are “clothes horses”, ninety-nine percent of the collection is hers and one small window is set aside for her husband and fellow collaborator on artistic and scientific activities, Henry, Count Greffulhe. The family-donated pieces include her wardrobe for day and evening, ceremonies and other special occasions, including travel, accessories, drawings, sketches and photographs.

Most notable among French authors during this period is Marcel Proust. Proust adored her, devoured her being, followed her style and pleaded often to obtain a photograph of her. He used her as his muse for the novel, “In Search of Lost Time” and the lead character, Duchess of Guermantes. He did finally receive the Paul Nadar photo, which she also used for her identity card.

My recommendation
To accompany the exhibit visit, I highly recommend downloading the mini catalog for La Mode retrouvée in English . Only the French version is available for sale at the exhibition. The exhibit labels are ground level and a bit difficult to read.

What I Saw
Élisabeth de Caraman-Chimay (1860-1952) fashioned her way through decades of change and used her feminine wiles of influence to be associated with those changes. The Divine Comtesse was born at the end of the Second Empire, witnessed two French Republics and two world wars. She lived through the Belle Époque and the Roaring Twenties, and was the acknowledged leader of Paris Society (le Tout-Paris) for half a century.

Her wardrobe follows a timeline of history and appearances at fundraising events for charity. The events turned into public relations as she raised funds for operas and shows, supporting Wagner, Diaghilev’s Ballets Russes, and Isadora Duncan. The Countess, joined by her husband, helped Marie Curie to finance the Institute of Radium, and Edouard Branly pursue his research into wireless telegraphy. The Countess, considered a political animal, was active in political opinion and support.

Green and black, her favorite colors, are featured in the exhibit. The Countess liked to wear vivid green clothes to set off her auburn hair.

Her wardrobe and bills of sale on display span fashion’s historical timeline from the 1878 of high neck and puff sleeves to the plunging décolleté of her 1937 twill and silk chiffon evening dress with ostrich feathers. The patterns on her 1912 Babani reflect Minoan pottery. The geometry and graphics of hieroglyphics of her 1925 metallic lace dress follow the Tutankhamun trend of 1922.

The Palais Galliera only presents temporary exhibitions and does not offer permanent display of its collections. Between every exhibition, the museum is closed to the public.

Book Review: Paris to the Pyrenées, A Skeptic Pilgrim Walks the Way of Saint James