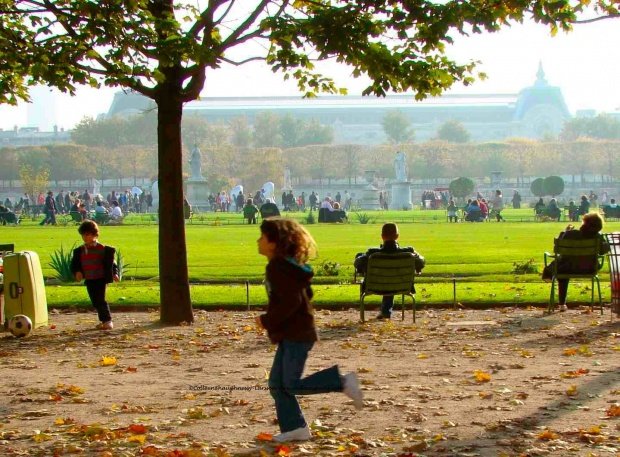 Visit Invalides and the Army Museum

Things to do with children who speak French

Having fun with children in Paris
Travel to Paris with the eyes of a child. Hopefully, you have visited the city before so you can begin to think along those lines. You might bring your own children; we rent ours by the week (friends and family, of course!)

One of the beauties of bringing children to Paris is the new view — seeing it through their eyes. Come take a springtime visit with us in Paris.

Daisy de Plume, founder of ThatLou (your Paris must-do treasure hunts in the Louvre and Musée d’Orsay) wrote a piece for Bonjour Paris “Paris with Kids: Hidden Outdoor Treasure“. She gives you a Hidden Kid Treasure for one of my favorites, Jardin des Plantes (a labyrinth); Jardin du Luxembourg (a carousel with a ring toss); Jardin des Tuileries (sunken trampolines). (Use Google Translate to read the Jardin pages when they are not available in English.

Our niece and nephew live on the outskirts of west Paris and stay with us every now and then while their parents take a little vacation.

We make a list of things to do, places to see, pizzas to make, and sports activities to make them run around a lot. They live in a small town and some things are different in the big city.

Marie, was a short, three-and-a-half-year old (halves are very important at this age). Little
brown poles dot the Paris sidewalks to prevent cars from parking on the sidewalks. One day, we left our apartment to take a walk to Jardin des Plantes. While chatting away, stretched four across a narrow sidewalk, Marie looked sideways, and bang! walked rightinto one of those poles. First there was shock and then bewilderment — should she cry or not. I don’t think she did; there was so much street activity going on she must have been distracted.

Not everything in Paris is this short and at eye level for the little ones, however. The dinosaur, mammoth and extinct animal skeletons at the Museum of Natural History – Paleontology and Geology are pretty big.

The Eiffel Tower is tall. Taking a trip on the bus to get there is an adventure (Buses 42, 69 or 87).
Some of the rides at the Paris Fair (Foire du Trône in April and May) move pretty fast and can be overwhelming for a child, but the cotton candy is bite size.

Chocolate from the chocolate factory is more than a mouthful.

Ping pong tables in the parks are at the right height for a 7-year-old.

And don’t worry if you choose to take up any of these suggestions, you will still get in your sightseeingand probably see areas of Paris you never thought to visit before.

Paleontology Museum
This is not the renovated natural history museum, but the old, dusty one at Jardin des Plantes in the fifth arrondissement — the Paleontology and comparative anatomy museum.

Inside this old structure from 1898 are thousands of skeletons, fossils, relics and mass quantities of apothecary jars filled with formaldehyde. Squeamish parents need not attend, but the kids will love the two-headed specimens, the Cyclops and other assorted mysteries of nature.

We had gone to see the animated feature, “Ice Age” (“Age de Glace”) the day before so it was a good stepping stone into the past. 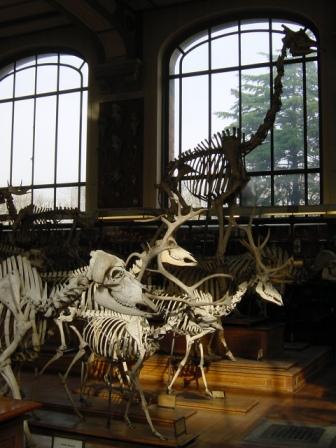 For lunch we broke down and went to a fast food restaurant across from the paleontology museum with gold arches. Their happy meal gift was “Lucky Luke” a famous French cowboy cartoon character. Throughout the year, the gift is different: “Fox Kids”, “SEGA/computer game, etc.”.

After lunch we stepped back in time for a while and compared what we had seen at the movies and what was in the museum. Marie wasn’t as understanding of the past as Gabriel (7 ! at the time). The specimens in the jars attracted more interest.

Once we left the museum, we kicked the foam soccer ball around , visited the zoo, played in the playground, and ate ice cream. The multiple activities available in this garden will be a section all its own on my website one day .

If you don’t bring your own foam soccer ball, they can be found at one of the sport stores in Paris (Decathlon or Go Sport).

Paleontology museum background
The anatomy and fossil collections were exhibited as a symbol of the nature’s diversity.

A major renovation was undertaken to celebrate the hundred year anniversary of the building (i.e., compared to the dust and antiquity and lack of lighting when I first saw the presentation several years ago). This valuable collection attempts to conserve the spirit of the historical location, and the collections of the writings, engravings and drawings of this museum from the 19th century.

“As part of the preparations for the 1900 Universal Exposition, this museum was opened in 1898, constructed according to the plans of the architect, Frédéric Dutert.

The architecture of the galleries reflects the spirit of the times: construction of metal beams, girders and consoles blended with stone. Dutert called on numerous artists to develop a decoration inspired by naturalism which would inevitably was a precursor to Art Nouveau.” 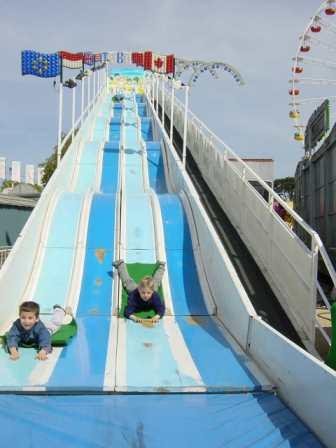 Over the course of the week, we paid a visit to the zoo at Bois de Vincennes (larger than Jardin des Plantes), and ate our picnic lunch on a bench (all of the picnic tables in the zoo were occupied).

That afternoon, we visited the fairgrounds for rides and cotton candy (de la barbe à Papa). The fairgrounds are a short walk from the zoo.

This is an annual event held in the park Bois de Vincennes in April and May.

Ping pong
I know for sure of two small parks in Paris that have ping pong tables (tennis de table).

The one we stopped at during a stroll in the 3rd arrondissement was Parc St. Gervais. You might know this area by another name: Picasso Museum on rue Thorigny (3rd arrondissement). If you walk behind the museum, there is a neighborhood and a park. Inside the park along with trees is a ping pong table, benches, and a playground.

Another spot for ping pong is in the Square Trousseau (12th arrondissement). This square is near the Marché Aligre and has a gazebo, playground, benches, a restaurant on the corner and a bakery — think sandwiches — (boulanger) across the street. Stop by the Baron Rouge/Bouge/Rouge (the name has changed a couple of times). A wine bar where wine is served out of the casks and you can eat oysters on the outdoor casks.

One way to find parks in Paris is to look for the green spots on the Grand Plan de Paris map (this is the one with the streets not just the bus and metro routes). Of course, whether or not they have a ping pong table is not indicated. But carry those paddles just in case or explore one of the sport stores in Paris: Decathlon or Go Sport.

Taking the bus to the Eiffel Tower
We live in the Bastille area so for us to go to the Eiffel Tower and see the city along the way, we jumped on the No. 69 bus one day. The last stop is the Tour Eiffel. Marie and Gabriel are used to riding in a car, so this was something of an adventure for them. They learned how to hold on to their own ticket and put in the validator.

The chocolate factory
It was Easter when Gabriel and Marie were here. So, of course, one thinks of Easter bunnies, eggs, dogs, chickens and shrimp. Yes, inside the large pieces of chocolate are smaller pieces molded into various shapes (shrimp and seahorses) and in shades of chocolate, white, or pink.

I hope this gives you some ideas for your next springtime sojourn to Paris with children. Many of our other activities such as candy making with marzipan and pizza making from scratch were done at our house and would be difficult in a hotel room.

Riding the bus
Children under four ride free, between 4 and 10 is a reduced fare. Buy a Mobilis all day travel card if you plan
on using public transportation more than three times in a day. With credit cards from the United States, buy
your tickets at the window. US credit cards do not generally have the smart chip.

Ask for the Number 2 “Grand Plan de Paris” at the metro station. It is a big, readable transportation and street
map. On one side are the metro stations; on the other the bus stops and routes.

Chocolate factory
à la Petite Fabrique is located at 12, rue Saint Sabin in the Bastille area (Metro Bastille or Bréget-Sabin)
Open Tuesday – Saturday 11:00 am – 7:30 pm, closed Sunday – Monday (unless it is close to a chocolate holiday such as Easter, Christmas or New Year’s).

Mini-movie tour in Paris
An icon of cinema in Paris is called the Le Grand Rex. It is 1930s architecture on the exterior, and we had
always heard how large it was inside with a giant screen.
By accident, we went through some doors at the Rex to buy tickets and came face-to-face with an
old-fashioned ticket window.
The lady was giving the people in front of us something to put around their necks!
Looking for the price of the tickets we saw an entry fee!
In fact, you had your choice: entry fee or entry plus a movie ticket.
We were enticed! This little excursion is Les Etoiles du Rex. Click on the US flag for the English version. They want you to “dive into the adventure” and “you are the star”!
The movie clapboards around your neck, in fact, trigger the sound, lights and adventure of this trip behind the big screen. A word of caution, you are being filmed every step of the way and will see the results at the end of the tour!

It’s a lot of fun and the audio-guided tours depart every five minutes.
Let the cashier know in which of the four languages you would like to experience this 45-minute mini-movie tour with props, sound stage, and history.
The architecture is very similar in its grandiose concept to Radio City Music Hall, the interior resembles the Tampa Theatre with the starry ceiling, lighting and Spanish exteriors on the sides. In the old days entertainers and dancers held their own spectacles before the movie.
The afternoon films are shown on the big screen downstairs, while at the evening film no one sits downstairs – only in the two-level balcony. They lower a gigantic screen in front of the proscenium – you are practically in the film!
If you do not speak French go to a movie that you may have already seen or you know the story! Just to go.