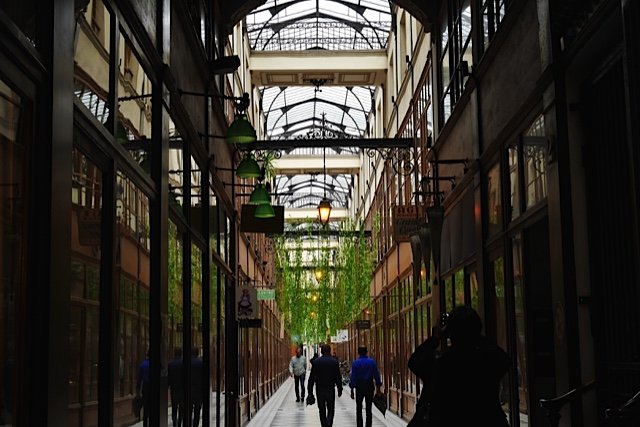 Colleen’s Take Away: This is a guided walk if you want a Paris strolling moment without pressure to move quickly with April. I recommend this tour because while dodging rain drops, protected by umbrellas, April’s off the beaten track tour was the sunshine of the day.

April Pett runs April in Paris Tours. We met at the base of Marianne, the emblematic sculpture of Place de la République. During our tour from 10 am to 1 pm, April intertwined historical anecdotes with her casual air of strolling along Paris streets and boulevards.

April’s tour is a combination of busy and side streets. Her strong voice and smile makes it easy to follow along, listen to interspersed historical notes and makes you feel like you are walking with a friend and learning some history simultaneously. Her knowledge comes from university, language studies, being a former bike tour guide and her historical curiosity. She is a natural guide. On this tour, April had two participants: me, to see what she has to offer and Andrew, a first time visitor, from Australia.

Andrew was on a quick two-day stopover between London and Berlin and was going to see as much of the city, day and night as possible.

We began with the history of the République sculpture and then crossed a large segment of Paris from République and Turbigo to Les Halles. We weaved our way through side streets and the Passage du Grand Cerf, which has two entrances/exits: rue Saint-Denis and Place Goldoni. Passage du Grand Cerf is one of the highest passages in Paris (12 meters). For film buffs, you may recognize it from the 1960 film “Zazie dans le metro”.

Introducing us to the idea of the café chairs facing outwards was a perfect relaxing moment for a coffee and a pastry from the oldest pastry shop in Paris, Stohrer’s, across the street. April leaves the door open to choose any café or continue on the walk. We were never rushed or pressured to move on. Her route makes central Paris seem like a small city with neighborhoods everywhere!

Through the park construction of Les Halles, we made our way across Pont Neuf. Depending on the weather, she sometimes stops at one of the seat alcoves to enjoy a pastry instead of a café. The tour continues on the island and again, depending on the weather, stops after Notre-Dame or for a sorbet on Ile Saint-Louis. And if you need an umbrella, shops on the side of the Notre-Dame cathedral sell them for as low as six euros.

Because I had another engagement, Ile-de-la-Cité past Notre-Dame was my last stop. April and Andrew continued on for a lunch of crêpes, bought ponchos and biked through Paris. Contact April about your particular route and timing. She has a variety of tours and as we experienced, weather in Paris is far from a deterrent to enjoying the sunshine of April in Paris.

Colleen’s Tip: a map for orientation (covered in plastic for the weather). 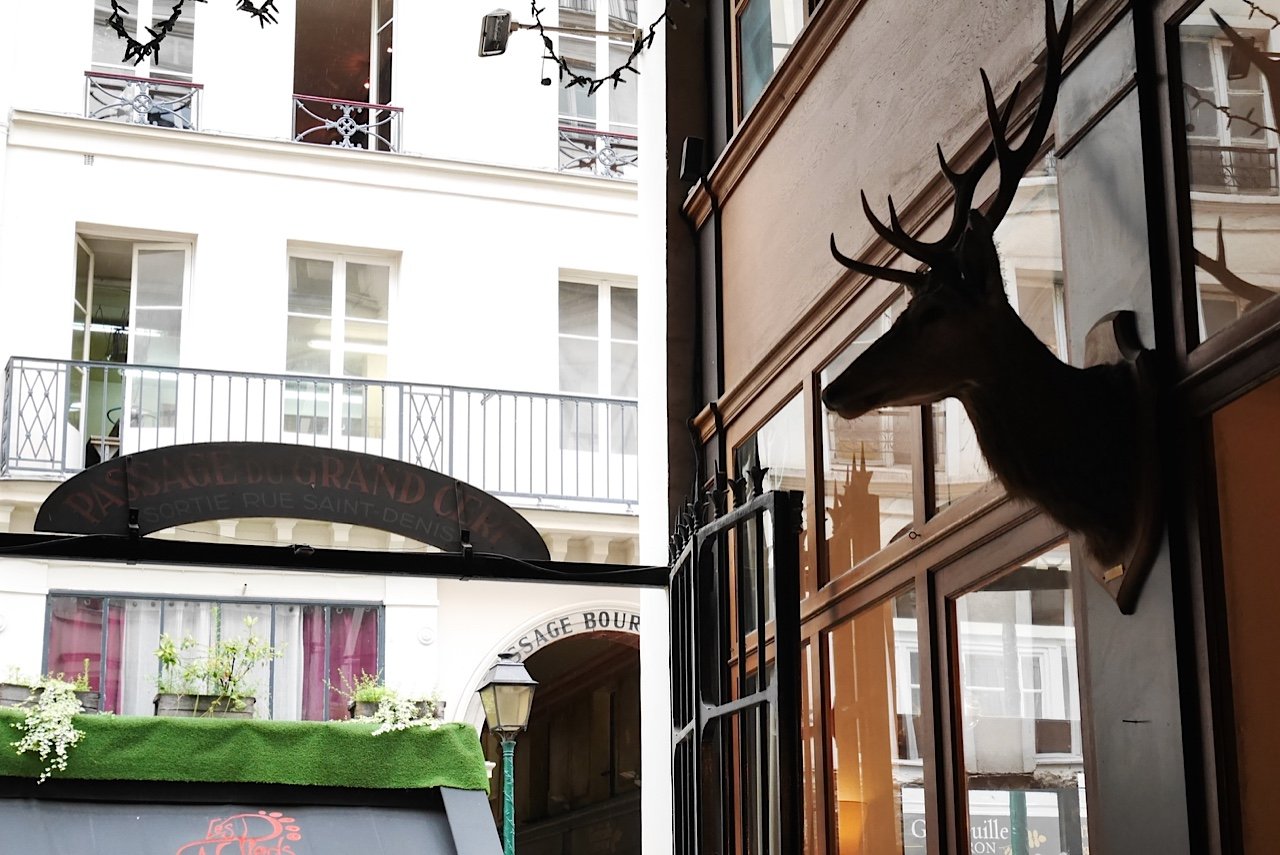 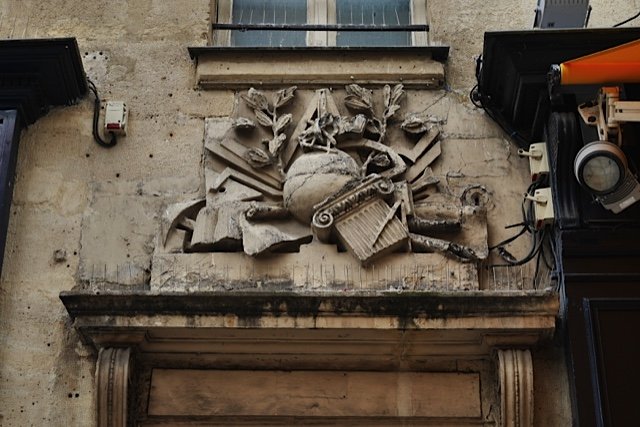 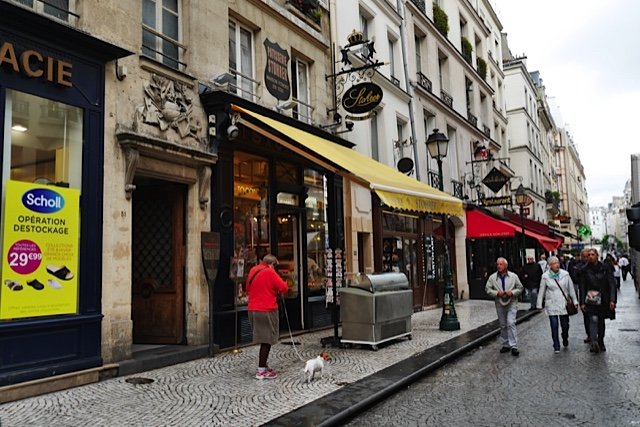 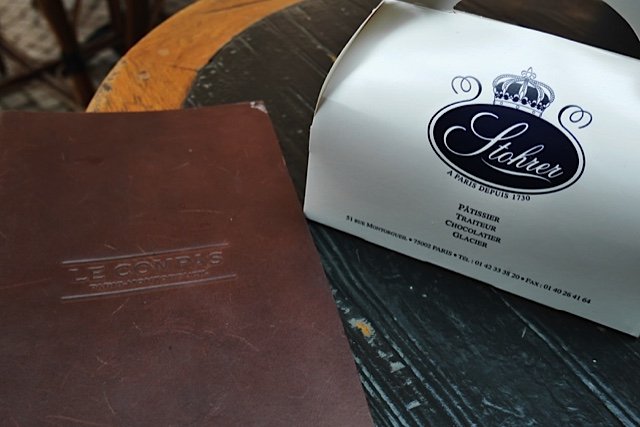 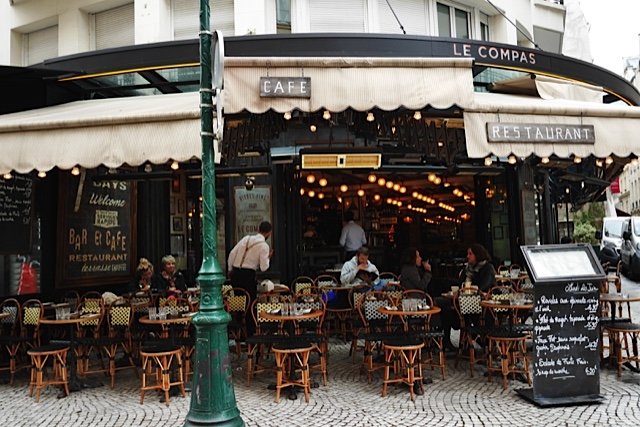 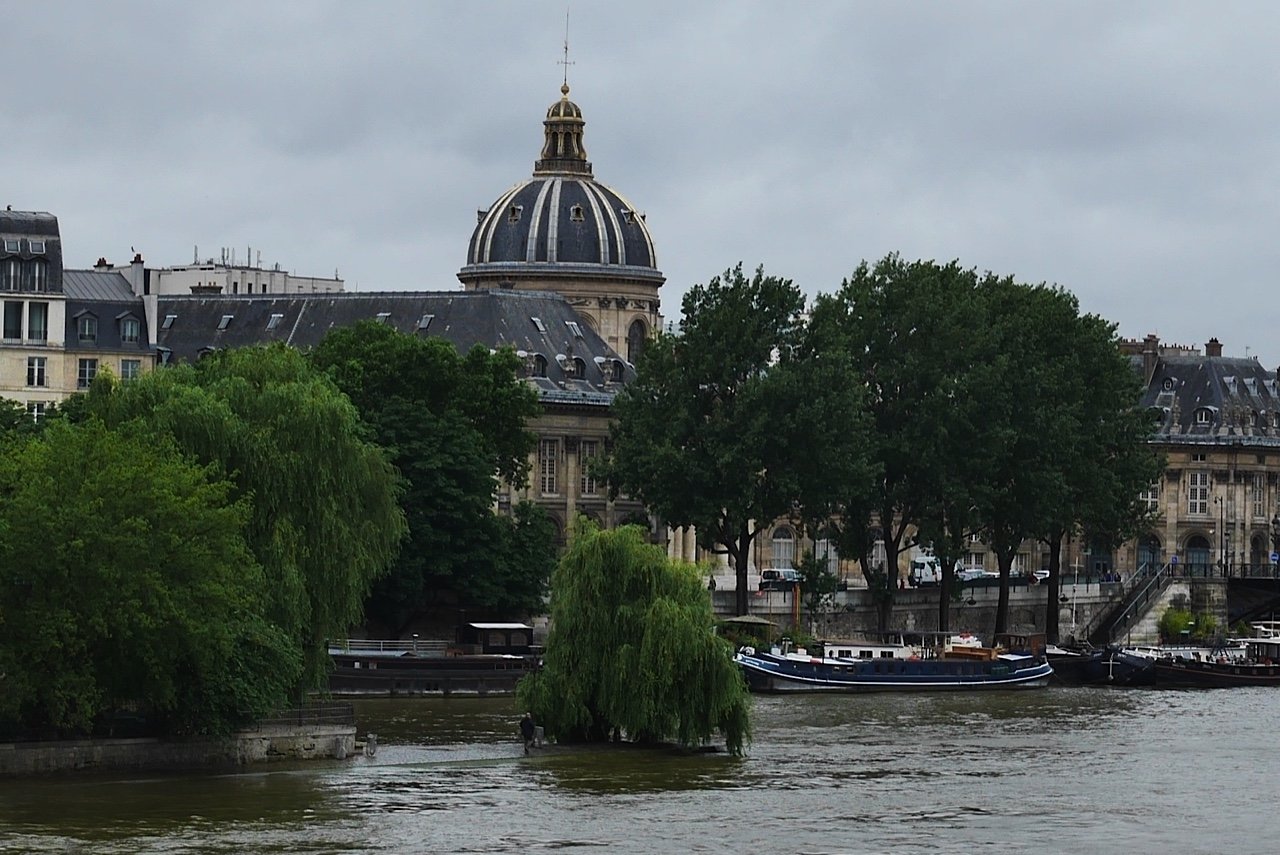 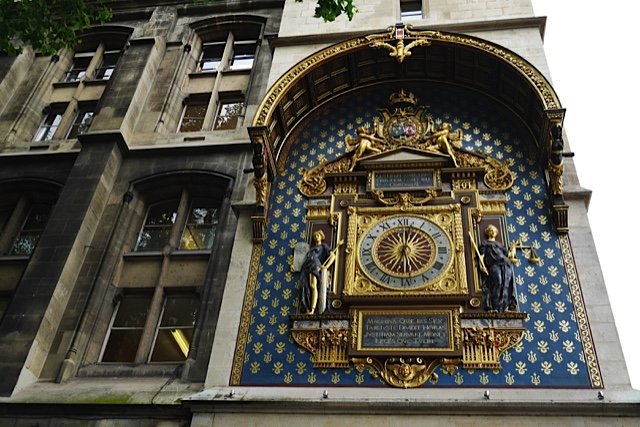 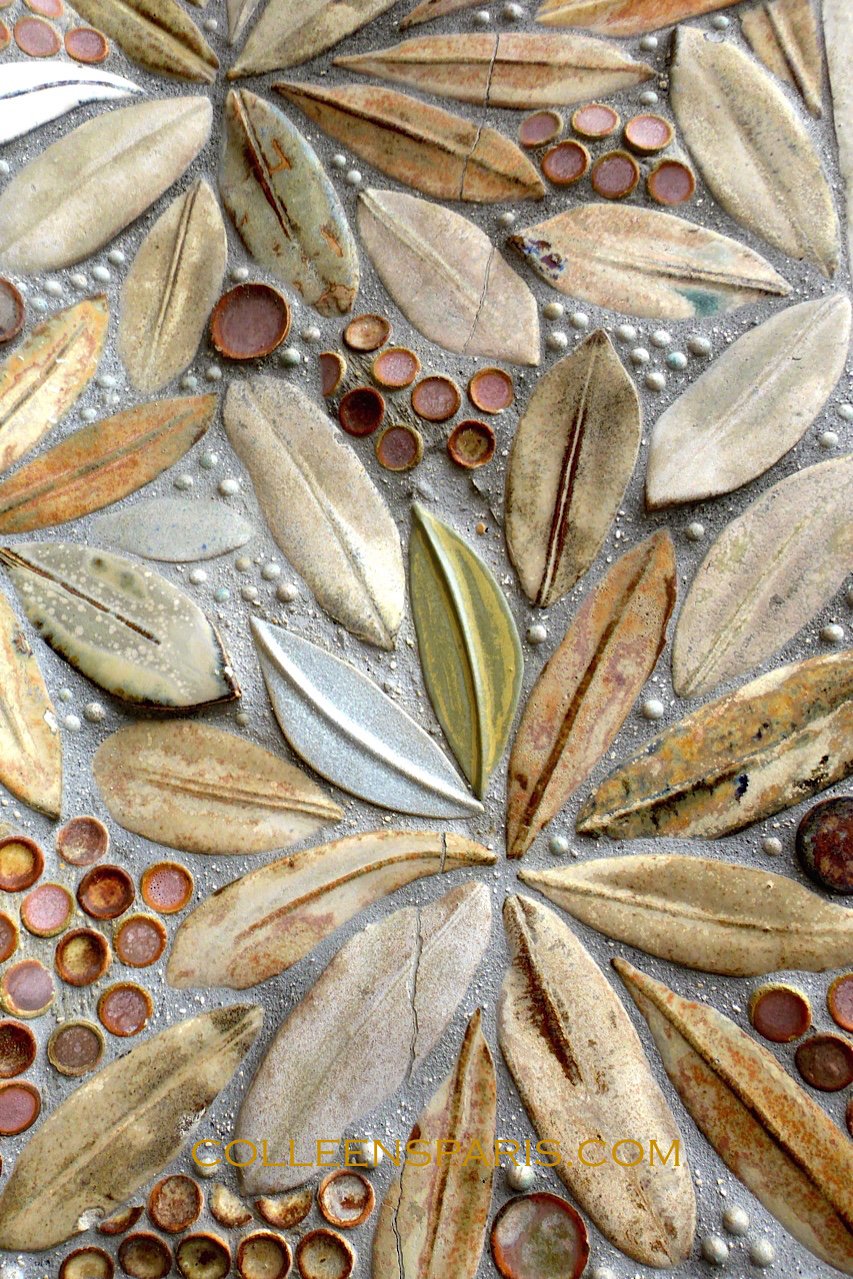 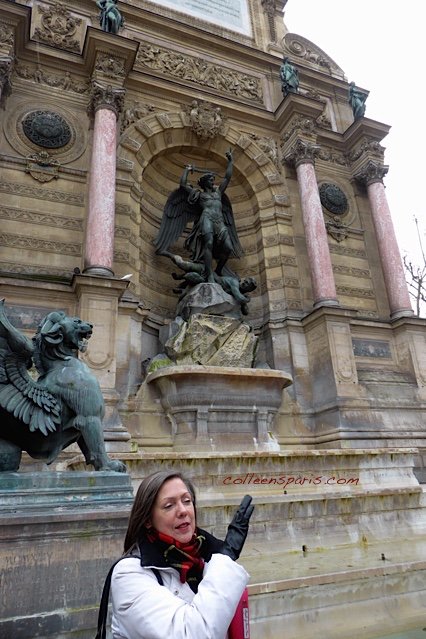 Angels of Paris Walking Tour No. 1 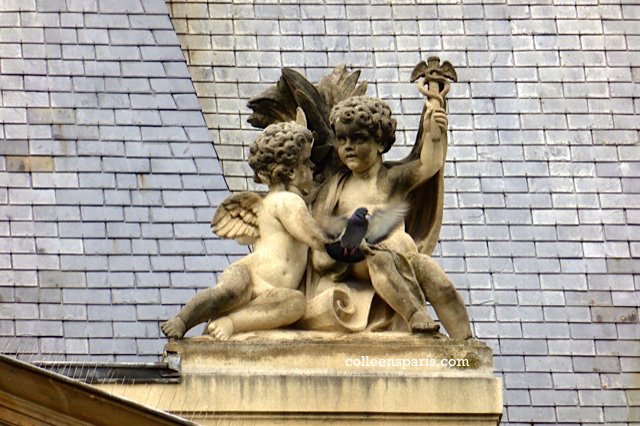