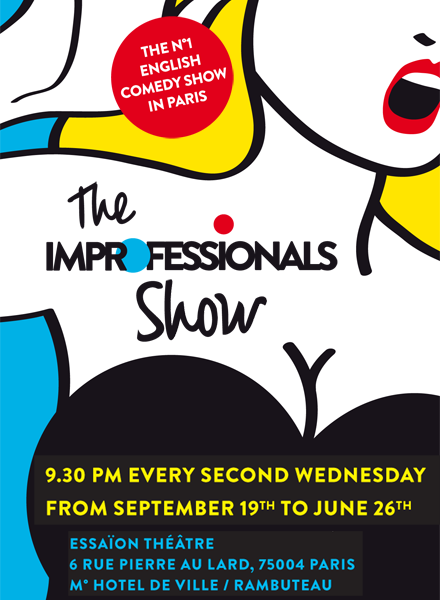 Go out for the night and laugh or learn how you make me people laugh… Your choice. Here is a listing of some of the improv shows I know about in Paris. Some of the venues are seasonal (i.e., closed for the summer).

Coming soon is a list of English theatre/theater in Paris. If you have anything to add to the list, send it to me at info@colleensparis.com  Thanks!

Improfessionals – This international improv group has been entertaining and teaching improvisation since 2001. The venue for the shows and workshops (English and French) is a canal boat along the Quai de la Seine. They are the “No. 1 English comedy show in Paris”.

Karel Beer
Stand up comedy and concerts “Laughing & Music Matters in Paris” are available in Paris at La Java.
Karl Beer “presents some of the world’s greatest stand-up comedians and simply the best concert acts you can hear anywhere in the world.”

English comedy club
Laughing Matters Presents
If you are looking for comedy and entertainment in your native tongue or the English you have picked up, I can recommend a comedy club, la Java. They used to be at the Hôtel du Nord, famous for the movie, along Canal Saint-Martin.

Karl Beer’s gang has moved to rue du Faubourg du Temple.
“… a genuine 1930’s dance hall where once upon a time Jean Gabin would trip the light fantastic with Edith Piaf. The man behind the bar is Christophe who with his father Jacques has been running the place for decades.  Ghosts abound!”

French Fried Comedy Night
Stand-up in English on Tuesdays at 9 and Fridays at 8.