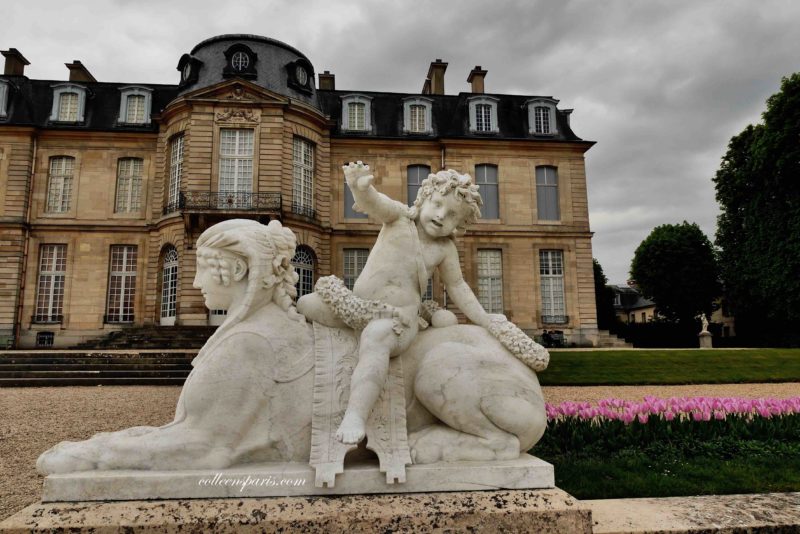 Why not forego the hassle of shooting your next film at Versailles or the Élysee Palace. Instead, head out to the Château Champs-sur-Marne, less than an hour from the Bastille. The château and grounds have been popular movie locations. The journey from Gare de Lyon makes for a relaxing day trip to the countryside. If you are not shooting a film, the day trip is worth it anyway.

What you will see
The château is filled with furniture and extensive decorative interiors, including bathrooms, a smoking room, salons, bedchambers, service corridor, children’s dining room (formerly a bathroom), the smoking room and a billiard room (in case you are looking for decorating ideas).

You can walk among beautiful gardens and the orangery or spend a couple of hours roaming the park. Near the orangery is the tree “If de Boussuet” measuring 76 meters (250 feet) in circumference that survived the 1999 storms. I thought it was a gigantic bush and only found out about this trivia later!

Day Trip to Champs-sur-Marne from Paris from Colleen Shaughnessy-Larsson on Vimeo.

Temporary exhibitions
Using clothing exhibits since 2016, the château comes to life from another angle other than interiors. A free, full-color brochure of photos, history and description of the garments is included with the admission charge. The 1890-1930 exhibit I saw included a black lace robe by Gabrielle Chanel from 1913 and a 1935 blue evening dress by Jeanne Lanvin. The men and children fashions are well represented with their outfits, hats and shoes on display.

In French and English free-standing touch screen video monitors display snippets of movie scenes shot here, usage of the rooms, history and information about some of the furnishings (Nissim de Camondo’s baby chair. You will recognise this name from the Paris house museum. His uncle, Charles Cahen d’Anvers, was the last owner and sold it to the French government in 1935).

About the château
The construction of Château Champs or Champs-sur-Marne began in 1699 and was completed in 1707. Extensive renovations and restoration took place around 1895 with Louis Cahen d’Anvers. It took six years of recent and extensive renovation the château to restore Château Champs-sur-Marne to the condition it enjoyed under Cahen d’Anvers. and once again

Famous residents have included the Marquise de Pompadour (Louis XV’s favorite) and French Presidents from 1939 to 1974. Around 1748, Christophe Huet painted the “Chinoiseries” decor; very much in vogue in the 18th century. Famous balls during the Belle Époque included one organised by Paul Poiret, the designer, introducing the Oriental and exotic styles. 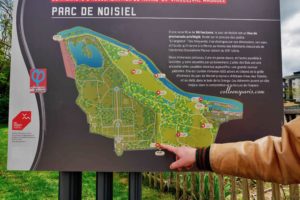 From the Bastille to Château Champs-sur-Marne takes one hour, including metro, RER A. I recommend walking from the RER station Gare de Noisiel (24 minutes) to the Château entrance, which takes about 24 minutes. This is a prettier walk than walking through the neighborhoods. Walk out the station toward the right. Follow the length of the tree and flower-lined walkway straight to the Parc de Noisiel. Turn left and continue on the rue de Paris in front of the giant gates and park (Transilien RER A website)

Some of the movies filmed here were Jeanne de Poisson, Marquise de Pompadour; Les Misérables; and more films from Champs-sur-Marne listed on Wikipedia.

Brochure (in French) of history, architecture and garden layout

Open everyday except Tuesday
Château: 10 am to 5 pm (closed for lunch 12:15 am to 1:30 pm)
Park: 10 am to 5:30 (free entry)
Brochure available in five languages at the entry; touch screen monitors in three languages: French, English, Spanish

Meaux, A brie(f) half hour from Paris