Gluten-free flour – Affären is a Swedish specialty store near the Swedish Church and Parc Monceau that carries an unsweetened gluten-free flour mix (in Swedish: glutenfri mjölmix osötad) by Finax, which is a family-owned enterprise and leader in Nordic cereal companies.

This page has been updated with one change. ZeVisit.com no longer does tourist audio guides in English. Thank you Amanda from AmericanFille for linking to my page.

Gluten-Free food tips from a reader’s experience in Paris “I ate a lot of Mussels and French fries or steak, salads. I liked the restaurant l’Atlas they have a great moulles + frites made with blue cheese and white wine sauce that is excellent.- Sushi Bars Salads with c hicken, no croutons “…But truthfully I did eat some bread in Europe. I find that the bread is made fresh every day, which means no need for preservatives that we seem to require here in the US and with drinking the wine it gives me enzymes I do not have to help digest, since my allergy is intestinal. I hope that helps, there are so many great restaurants in the 5th, 6th, + 1st district actually anywhere and I find it no issue. — Gail” 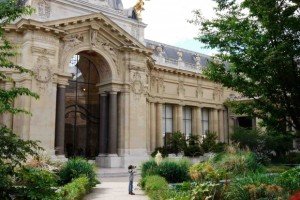 Musée Carnavalet/Histoire de Paris, 23 rue de Sévigné 3rd arrondissement, Metro: Saint-Paul, Bus: 29, 69 76, 96 – 10 a.m. to 6 p.m. Tuesday through Sunday. (closed Monday and certain holidays) Located in two private houses in the heart of the Marais district, the Musée Carnavalet, a museum of history in Paris, housing collections that show how the city has developed from Prehistoric Times to the Present Day with paintings, sculptures, furnitures and models… The museum also owns a graphic arts collection – drawings, engravings, photographs and posters – as well as a remarkable numismatic exhibition.

Crypte Archéologique du Parvis de Notre-Dame, 1 place du parvis de Notre-Dame 75004, Metro: Cité or Saint-Michel, Bus: 24, 25, 27, 96 – 10 a.m. to 6 p.m. (closed Monday and holidays) Foundations of Paris, including some from Antiquity, the Medieval and the Classical Age: Gallo-roman rooms, a fourth Century enclosure wall, the crypt of the former chapel of the Hôtel-Dieu, medieval remains from the rue Neuve Notre-Dame, foundations of the foundlings Hospice, traces of Hausmann’s sewers. (closed for renovation)

Maison de Victor Hugo – Hôtel de Rohan-Guéménée, 6 place des Vosges 75004, Metro: Chemin-vert, Saint-Paul, Bastille, Bus: 20, 29, 65, 69, 96 – 10 a.m. to 5:40 p.m. (closed Monday and holidays) The two houses in which Victor Hugo lived longest are both under the aegis of the City of Paris, the Rohan-Guéménée mansion in the place des Vosges from 1832 to 1848 and Hauteville House in Guernsey, the house of exile from 1855 to 1870. The house in the Place des Vosges, became a museum in 1902 at the instigation of Paul Meurice. It contains souvenirs evoking the family, society, literary and political life of Victor Hugo.

Musée Cognacq-Jay/Musée du XVIIIeme  , Hôtel Donon 8 rue Elzévir 75003, Metro: Saint-Paul, Chemin-Vert, Bus: 29, 69, 76, 96 – 10 a.m. to 6 p.m. (closed Monday and holidays) In the heart of the Marais district, in the Hôtel de Donon, the Museum shows the collections gathered by Louise Jay and Ernest Cognacq who founded the large store, La Samaritaine. The finely panelled rooms set off to advantage a beautiful ensemble of eighteenth century works of art : drawings by Watteau, painting by Boucher, Chardin, Fragonard, Greuze and Canaletto, pastels by La Tour, Meissen porcelain and furniture stamped by the great cabinetmakers, all recreate the atmosphere of intimate refinement prevailing in a Parisian mansion in the Age of Enlightenment.

Maison de Balzac, 47 rue Raynouard 75016 Metro: Passy, La Muette, Bus: 32, 50, 70, 72 – 10 a.m. to 6 p.m. (closed Monday and holidays) Perched on the hills of Passy, this house is the only one of Balzac’s parisian homes to have survived. Here in his study, from 1840 to 1847, he corrected the whole of La Comédie Humaine and wrote some of his masterpieces.The museum presents some of Balzac’s personal belongings, paintings, engravings and ornaments recalling his close friends and contemporaries, as well as a great number of original editions, manuscripts and illustrations of his works.

Musée de la Vie Romantique, 16 rue Chaptal 75009 Metro: Blanche, Saint-Georges – 10 a.m. to 6 p.m. (closed Monday and holidays) This museum of the Romantic period has kept all the charm of a private house in the Nouvelle Athènes district. Formerly the property of the painter Ary Scheffer and then of his nephew by marriage Ernest Renan, it has been devoted since 1987 to the memory of a great figure of Romanticism, George Sand. Across the courtyard, one can visit the artist’ studio, where he worked from 1830 to 1858 and entertained Chopin, Liszt, Lamartine, Tourgueniev and Delacroix.

Musée Bourdelle, 16 rue Antoine-Bourdelle 75015 Metro: Montparnasse-Bienvenüe, Falguière, Bus: 28, 48, 91, 92, 94, 95, 96 – 10 a.m. to 6 p.m. (closed Monday and holidays) In the gardens and workshops, where Antoine Bourdelle (1861-1929) lived and worked, the Musée Bourdelle now houses an exceptional collection of plaster, bronzes and marbles created by the man who was a pupil of Rodin, as well as teaching Giacometti, Germaine Richier and Vieira da Silva. The extension designed in 1992 by Christian de Portzamparc has the right dimensions to show off the sculptor’s work at its best.

Musée Cernuschi/Musée des Arts de l’Asie de la Ville de Paris, 7 avenue Vélasquez 75008, Metro: Monceau, Villiers – 10 a.m. to 5:40 p.m. (closed Monday and holidays) In 1896, Henri Cernuschi, the financier, bequeathed to the City of Paris his house on the edge of the Parc Monceau and his collection of art from the Far East acquired during his world tour. The museum now owns a remarkable collection of ancient Chinese art (Neolithic pottery, archaic bronzes, statues of the Buddha and funeral statuettes) as well as fine Chinese paintings from the twentiety Century.

Musée Zadkine, 100 bis, rue d’Assas (6th arrondissement), Metro: Notre-Dame-des-Champs ou Vavin, Bus: 38, 82, 83 and 91 – 10 a.m. to 6 p.m. (closed Monday and holidays) Ossip Zadkine, an artist of Russian origin, who emigrated to Paris in 1908, lived and worked in this house-cum-workshop between 1928 and his death, in 1967. The collection with over 400 sculptures, and as many works on paper – both gouache and pencil drawings – and documentary photographs, covers all the sculptor’s creative periods. To foster a spirit of confrontation and exchange between Zadkine’s work and the developments in contemporary art, the museum has set up a programme of guest artists.

Les Catacombes, Metro: Denfert-Rochereau, Bus: 38, 68; Hours: 10 a.m. to 5 p.m. (last entry at 4 p.m.) Former underground plaster quarries that since antiquity were used in construction. The catacombs are the final resting place for over seven million Parisians when many of the cemeteries were closed or renovations of Paris took place.

Films during the month August Cinéma au clair de lune (Movies under the light of the moon) is an annual event held during the month of August. The Paris locations change for each film.  Beginning at 9:30 p.m., the films are shown free of charge every night except Sundays and Mondays in certain plazas, squares or gardens. Over 90,000 spectators take advantage of the cinema.

Survive A Cortisone Diet In Paris