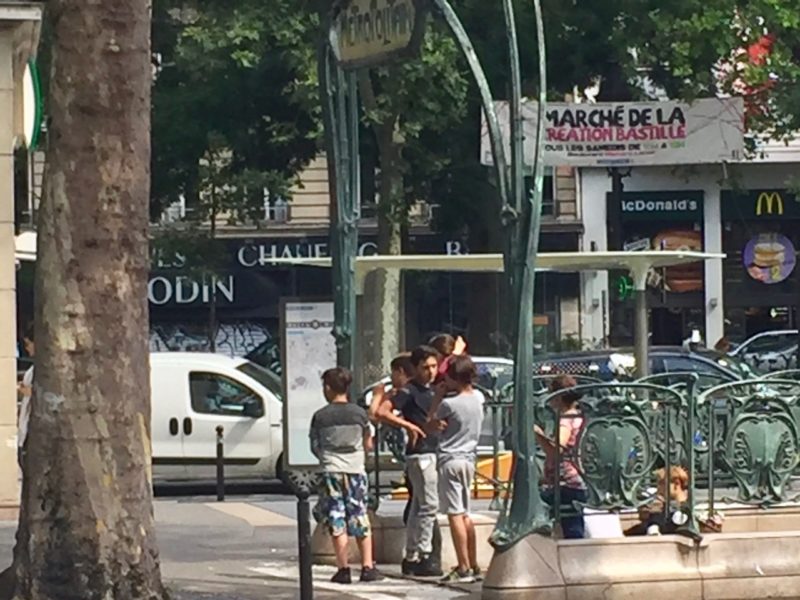 When an emergency arises in Paris or you want to report a problem to the police, dial “17”. Today a security guard at the Banque de France helped me after an incident at the BNP Paribas Beaumarchais, Bastille. After speaking with the police on the guard’s phone, I noticed the number on his screen “17”. I will never forget that number and used it about an hour later. By coincidence the same three teenagers who hassled me earlier at the ATM inside the BNP Paribas were leaving the line one metro train the same time as I walked off. I dialed “17”.

As I followed them, I spoke with the police about what happened earlier to me and responded to questions as I followed them at a distance. My original plan had been to return to the scene of an almost crime, go across the boulevard and take a few photos for a web entry to share some traveler tips with my readers.

As I was taking photos and had just shot a video of the same teenagers hassling a man (on his smartphone) at the ATM outside, the police arrived. Out from the traiteur Dalloyau came an employee explaining to the police that he sees these incidents all the time.

The police acknowledged they are aware of it, the surveillance camera is pointed right at the corner. If nothing serious happens like bodily injury or robbery, there is not much the police can do. The hasslers are minors.

Beware of pick pockets, three teenagers crowding around you at the ATM or standing too close in the metro. The theatrical phrase “They’re back” holds true for this year in the Bastille area.

Reading a France 24 article from 2012 (Charlotte Boitiaux wrote an article about the Romanians and Bulgarians (Roms) “Ici, au moins les poubelles sont pleines”). There are always families scattered around the shady boulevard Richard Lenoir. The latest group though, is not as tidy as the others when it comes to rummaging through the garbage containers (poubelle).