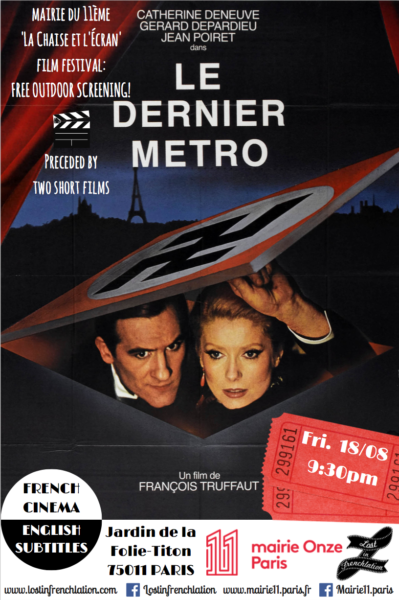 From The Lost in Frenchlation team:
“Lost in Frenchlation is thrilled to be working together with La Mairie du 11ème for the second year in a row to bring you free outdoor screenings of French films with English subtitles as a part of the highly anticipated 10th annual ‘La Chaise et l’Écran’ cinema festival! Join us for two short films followed by the classic feature length film « Le Dernier Métro » (1980) by François Truffaut (which won 10 César awards!) on August 18th.

“François Truffaut’s 19th century feature is his richest, most satisfying film in years, adroit dramatic entertainment, gracefully romantic and uplifting. But it is also a fascinating chronicle of Paris life under the German Occupation – its daily terror, material deprivation, opportunism, cowardice, denunciation, as well as its quiet heroism and unexpected moments of laughter.”
– Variety

“In occupied Paris, an actress married to a Jewish theater owner must keep him hidden from the Nazis while doing both of their jobs.”
– Official Synopsis

The event will take place in the Jardin de la Folie Titon: an amazing outdoor location under the stars. Please bring your own seating, whether it’s a picnic rug or chair.

Click HERE to see the Facebook event and let us know if you can make it! This will also enable us to provide you with any updates closer to the date.

Lost in Frenchlation is truly excited to play a role in bringing you this rare opportunity to experience yet another aspect of France’s rich cinema culture. We hope to see you there!”

Parades and the International Women’s Day